Why Was Alma Converted? 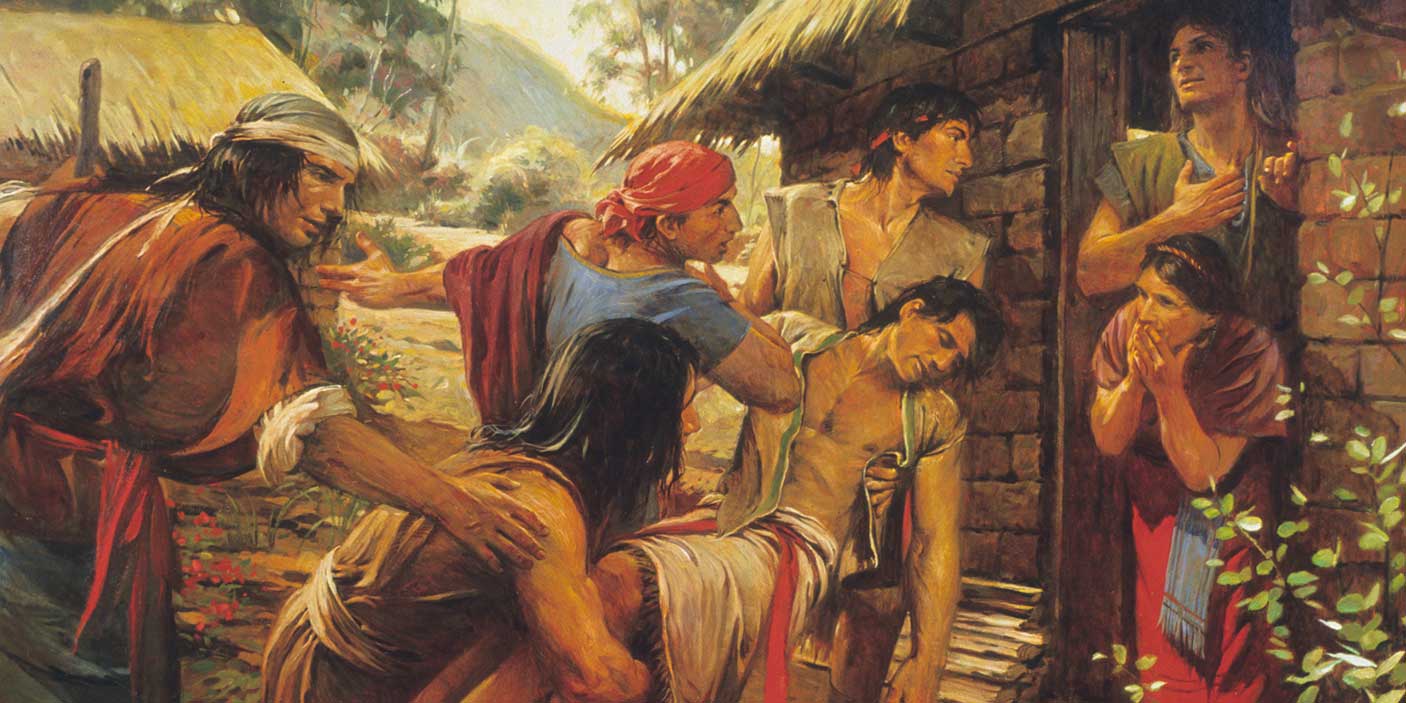 No other event had a greater impact on Alma’s life than the transformative three days he spent racked with torment after being rebuked by an angel.1 The themes of that experience permeate his sermons,2 and at least three different accounts of it survive in the Book of Mormon (Mosiah 27; Alma 36, 38). Detailed comparison of these accounts strongly suggests that all three are, in significant part, first person accounts from Alma himself.3 Of these accounts, Alma 36 stands out as the most complete and well-composed.

John W. Welch noted, “The abrupt antithetical parallelisms” of Alma’s original words in Mosiah 27:29–30, “have been rearranged into one masterfully crafted chiastic composition in Alma 36.”4 This repurposing of the spontaneous phrases spoken by the young Alma as he retold the story of his conversion to his son Helaman a number of  years later offers strong evidence that the structure of Alma 36 was deliberate and purposeful.

Welch, who discovered chiasmus in the Book of Mormon as a missionary in Germany in 1967,5 first published the chiastic structure of Alma 36 in 1969 (see chart).6 Since that time, the structure of Alma 36 has received continued attention and analysis, detailing not only the overall chiasm, but also laying out several substructures.7 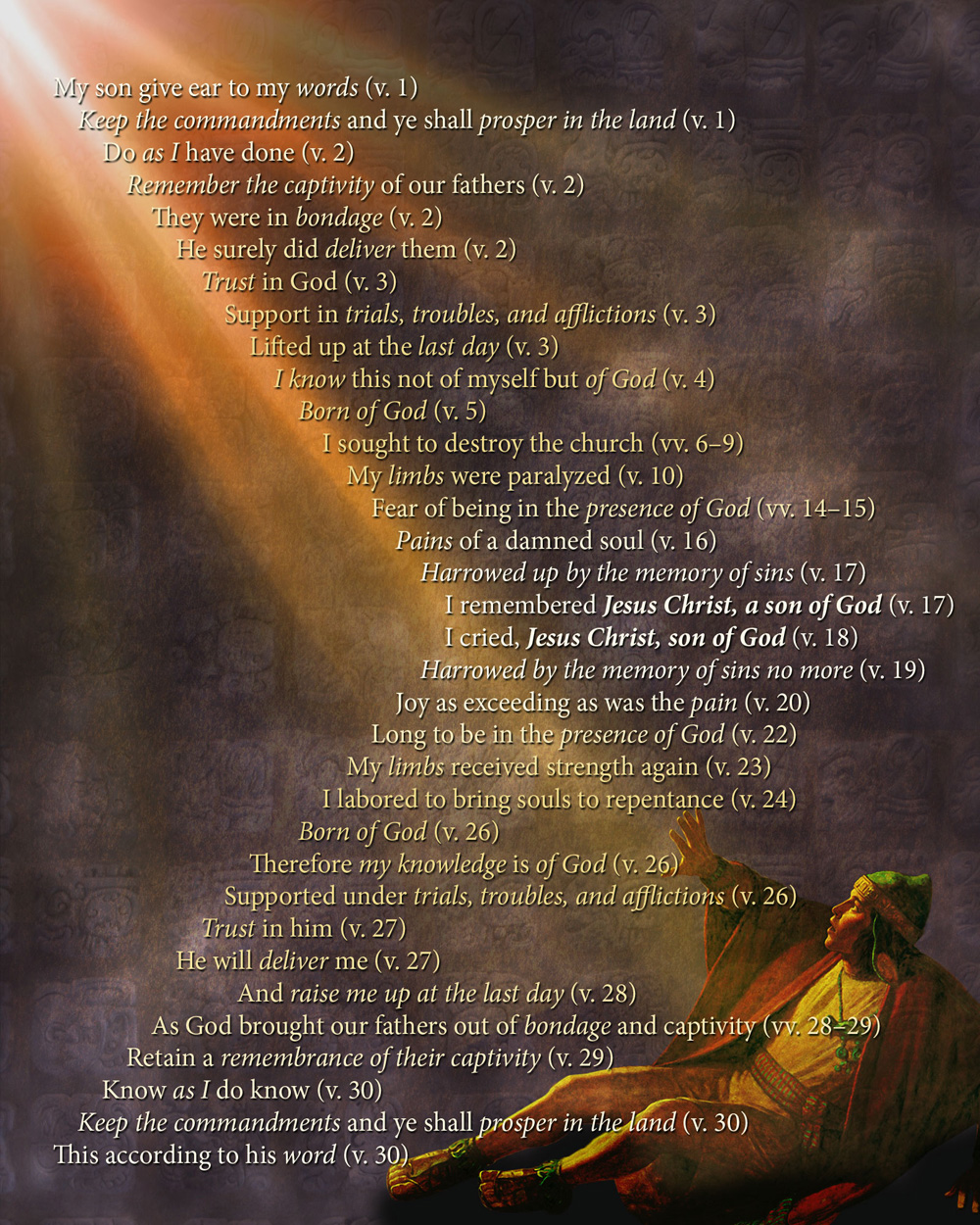 Of interpretive importance, careful observers have found that the climax of a strong chiastic structure is usually found at its midpoint. As Nils Lund set forth, “The centre is always the turning point. . . . At the centre there is often a change in the trend of thought, and an antithetic idea is introduced, [which is a] shift at the centre. . . . Thus, the climax is at the centre, not at the end, where we should expect it.”8 This feature of a deliberately composed chiasm, clearly present in Alma 36, helps readers to discern the the key point of the whole passage.

Though some have questioned the absolute chiasticity of the account,9 both criteria-based evaluations and statistical analyses further indicate that the chiastic structure in Alma 36 is unlikely to be an accident.10 Welch concluded, “After evaluating hundreds of proposed chiasms in a wide variety of lengthy texts, I have found that only a few texts unmistakably rate as planned, successful chiasms. Alma 36 is one of the best.”11

Producing a well written, elegant chiasm is challenging and difficult. According Welch, “If an author uses chiasmus mechanically, it can produce rigid, stilted writing (a poor result from an author misusing or poorly implementing any artistic device).”12 This is not the case with Alma 36, which smoothly transitions from one point to the next until reaching its climatic center point and then effortlessly unwinding down the same path.13

Alma … does not simply stick a list of ideas together in one order and then awkwardly and slavishly retrace his steps through that list in the opposite order. His work has the markings of a skillful, painstaking writer, one completely comfortable with using this difficult mode of expression well.14

Grant Hardy noted, Alma’s “account moves from public to personal to private and then back again.”15 Throughout the whole account, Hardy noticed the remarkable detail that “God is present in every phase.” Hardy thus thought “the order and purposeful design of Alma 36 suggests a world in which God … is in control, where the lives of individuals fit into some overarching … plan.”16

Central to that plan is Jesus Christ and his atoning power. While Alma on some occasions placed emphasis on the angelic encounter,17 it was not the appearance of the angel that caused Alma’s change of heart. Indeed, the chiastic structure in Alma 36 eloquently and effectively guides the reader most centrally and emphatically toward Alma’s direct, personal encounter with Jesus Christ. Welch noted: 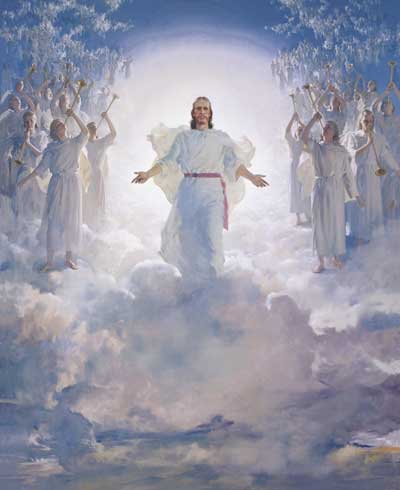 The structure of the chapter powerfully communicates Alma’s personal experience, for the central turning point of his conversion came precisely when he called upon the name of Jesus Christ and asked for mercy. Nothing was more important than this in Alma’s conversion—neither the appearance of the angel, nor the prayers of his father and the priests. Just as this was the turning point of Alma’s life, he makes it the center of this magnificent composition.18

The point of this remarkable literary structure underscores the dramatic turnaround in Alma’s life, answering most assuredly the question, why was Alma converted? That conversion occurred when he remembered his father speaking of “the coming of one Jesus Christ, a Son of God, to atone for the sins of the world,” which caused him to call out, “O Jesus, thou Son of God, have mercy on me, who am in the gall of bitterness, and am encircled about the by everlasting chains of death” (Alma 36:17–18).

The reversal here proceeds out from the central point until Alma’s effort “to destroy the church of God” (Alma 36:6) is juxtaposed with his new, unceasing effort to “bring souls unto repentance” (v. 24). From this reversal, Welch reasoned, “The message is clear: Christ’s atonement and man’s responding sacrifice of a broken heart and willing mind are central to receiving forgiveness from God.”20

It is hard to imagine any literary form being used more effectively than this extended chiasm to articulate the transformative effect of the Atonement in the lives of individuals all around the world. Many have felt as Alma felt. As a result, Alma 36 naturally and powerfully resonates with readers everywhere.21 After reading Alma 36 with Welch, prominent biblical scholar David Noel Freedman remarked, “Mormons are very lucky. Their book is very beautiful.”22 After extensive study of Alma 36, Welch concluded:

This text ranks as one of the best uses of chiasmus one can imagine. It merits high acclaim and recognition. Despite its complexity, the meaning of the chapter is both simple and profound. Alma’s words are both inspired and inspiring, religious and literary, historical and timeless, clear yet complex—a text that deserves to be pondered for years to come.23