Book of Mormon Central / KnoWhys
Why Did the Angel Speak to Alma With a Voice of Thunder? 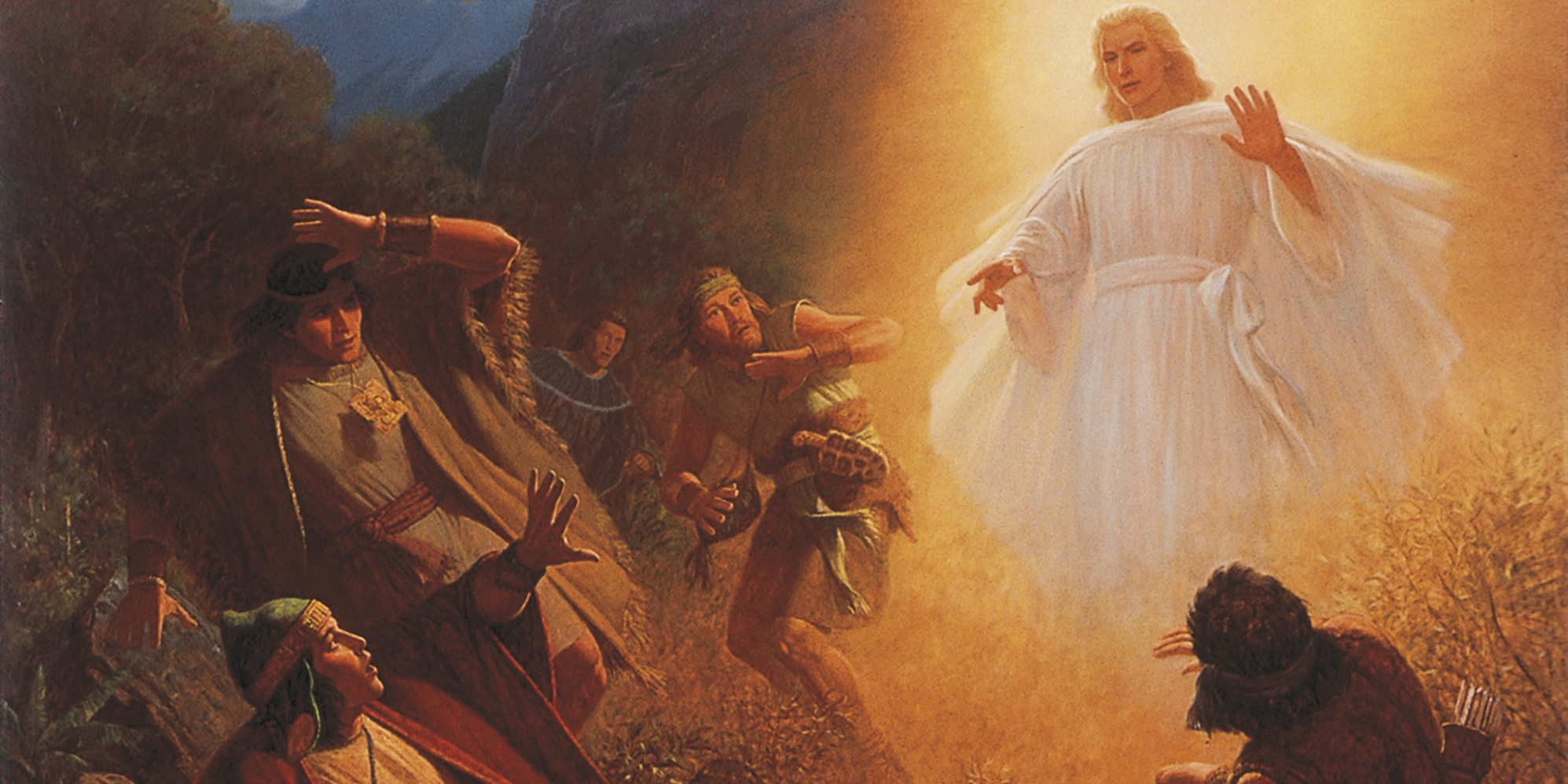 Conversion of Alma the Younger by Gary L. Kapp
“And he spake as it were with a voice of thunder, which caused the earth to shake upon which they stood.”

Alma the Younger and the sons of Mosiah are introduced as having been “a great hinderment to the prosperity of the church of God” during the reign of Mosiah. Like Saul of Tarsus before his conversion (Acts 9), they persecuted members of the church and actively sought to destroy it. They were said to be responsible for “stealing away the hearts of the people; causing much dissension among the people; giving a chance for the enemy of God to exercise his power over them” (Mosiah 27:9).

This suddenly changed when Alma and the sons of Mosiah, in the course of their “rebelling against God,” encountered an angel of the Lord. The scripture says that the angel “descended as it were in a cloud; and he spake as it were with a voice of thunder, which caused the earth to shake upon which they stood” (Mosiah 27:11). This resulted in so great an “astonishment” on their part that Alma and the sons of Mosiah “fell to the earth, and understood not the words which he spake unto them” (Mosiah 27:12). This dramatic hierophany (manifestation of the divine) concluded with Alma being struck dumb, “for with [his] own eyes [he] had beheld an angel of the Lord; and his voice was as thunder, which shook the earth” (Mosiah 27:18–19). 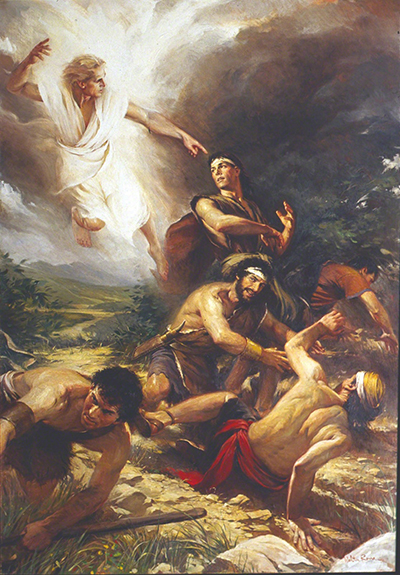 That the angel manifested himself to Alma in “a cloud” and with “a voice of thunder” which shook the earth makes sense in many contexts, especially from ancient Near Eastern and Mesoamerican perspectives. As explained by Mark Wright, ancient Near Eastern religions included storm deities, such as Baal and Birqu, who were depicted “as mighty warriors who brandished powerful weapons in their hands, such as lightning or fiery maces.” Like mighty Zeus of the Greeks, these deities commanded the rain, lightning, and other natural phenomena in awful displays of divine power. “Storms, then, were hierophanies to cultures who worshipped storm gods, and lightning served as a menacing manifestation of the power their gods wielded.”1

In the Hebrew Bible the God of Israel, Jehovah, absorbed some of the attributes and epithets of the storm god Baal. Psalm 68 praises Jehovah as “him who rides upon the clouds” (Psalm 68:4), an epithet shared by Baal in the mythology of the ancient Canaanite city Ugarit. In Psalm 65 Jehovah is portrayed as a God of fertility, livestock, and rejuvenation, again consistent with Canaanite depictions of Baal (Psalm 65:9–13). David G. Burke explained that the authors of the Hebrew Bible wanted to depict Yahweh, not Baal, as ruling the cosmos, and as “the one who rode the clouds, controlled the storms, and brought freshening rains” to earth.2 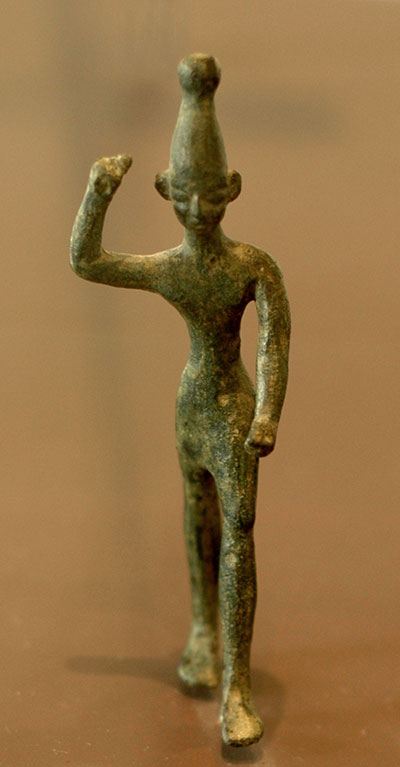 As they traveled through the Sinai wilderness, Jehovah revealed himself (a concept that scholar call a theophany) in a cloud or pillar of fire on multiple occasions to the children of Israel.3 During one such theophany at Sinai “there were thunders and lightnings, and a thick cloud upon the mount, and the voice of the trumpet exceeding loud; so that all the people that was in the camp trembled” (Exodus 19:16). This functioned as a display of Jehovah’s power, both over Israel’s foes (cf. Exodus 14:24) and the very forces of nature. It was intended to depict him as a divine warrior worthy of an awestruck Israel’s unfeigned devotion and loyalty.4

As Wright explained, “Lightning had far different connotations in the New World, specifically in Mesoamerica” than it did in the ancient Near East. While still associated with the manifestation of divine power, “in Mesoamerica lightning was associated with fertility and regeneration, even resurrection,” and not with violent, destructive forces in the hands of a warrior deity. Wright continued, “A central tenet of ancient Maya theology was that the maize god died, was buried, and was resurrected when lightning cracked open the surface of the earth, which was variously conceptualized as a mountain, a rock, or even a giant turtle carapace.”5 This association between lightning and the dying-resurrecting maize deity would have been significant for Alma, who would later explain that while in his stupor he found salvation in the dying-resurrecting Jesus Christ (Mosiah 27:23–31; Alma 36:12–23).

It is true that the manifestation of storms and lightning “varied greatly between the peoples of the Old Testament and the Book of Mormon.” Instead of "seeing this as a contradiction or inconsistency in divine symbolism, it is rather a reaffirmation that hierophanies are culturally embedded phenomena.”6 This should come as no surprise, as the Lord reveals himself to his children “after the manner of their language, that they might come to understanding” (Doctrine and Covenants 1:24; cf. 2 Nephi 31:3). It is important to remember that “language is not limited to the words we use,” but that “it also entails signs, symbols, and bodily gestures that are imbued with meaning by the cultures that produced them.” Further, “As with spoken language, symbolic and gestural languages are culturally specific and can be fully understood only by those entrenched within that particular culture.”7 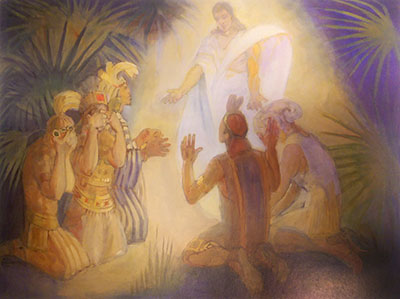 Understanding this illuminates why the angel spoke in a voice that sounded like thunder. Essentially, the angel wanted to shake up and stop Alma in his tracks; to show him that his life was on a shaky foundation. He spoke like thunder so that Alma would know that this heavenly messenger spoke with power and authority. This hierophany forced Alma to recognize that if he continued in his course he would himself be cast off and destroyed in divine judgment (Mosiah 27:16; Alma 36:9, 11).

The thunder and the accompanying lightning also symbolized regeneration and resurrection, which Alma would have recognized. He later spoke about being “born of God” (Alma 36:23, 24, 26) through this experience; resurrected to a new life, as it were.  The angel thus left an indelible impression on the young man. The thunder was unforgettable, impressed his soul, and transformed his life.