Why is the Sabbath Day Needed? 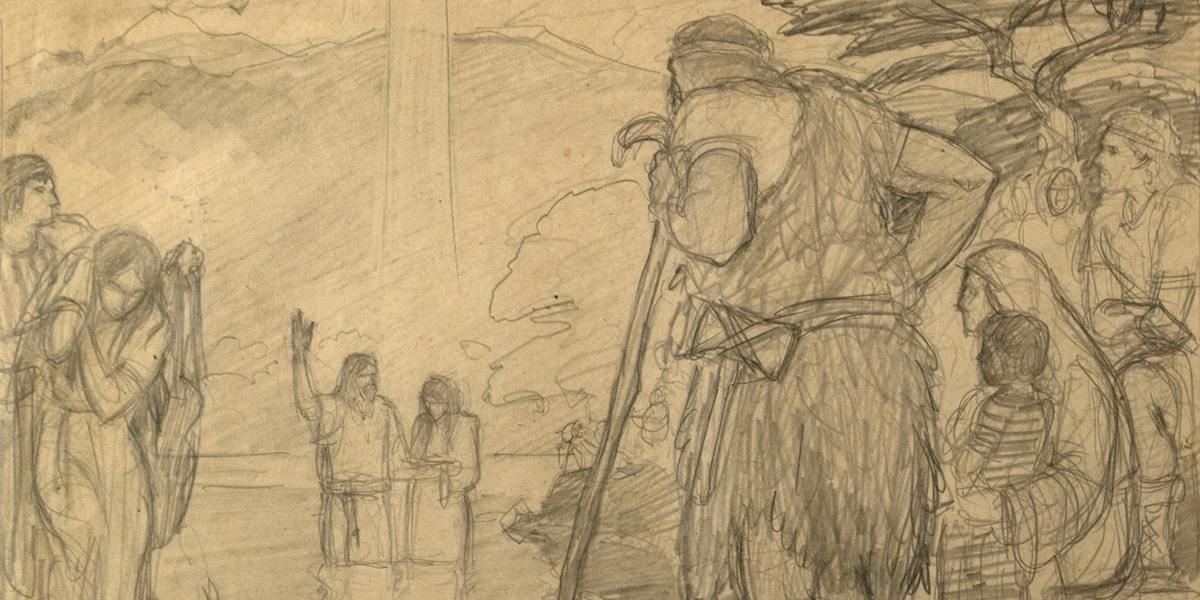 Alma Baptizing at the Waters of Mormon Sketch by Arnold Friberg
"And there was one day in every week that was set apart that they should gather themselves together to teach the people, and to worship the Lord their God, and also, as often as it was in their power, to assemble themselves together."

On 7 August 1831, Joseph Smith dictated a revelation now known as Doctrine and Covenants 59, describing how the Church was to observe the Sabbath, or the “Lord’s day.”1 The revelation was specifically addressed to those who had recently moved to Independence, Missouri, and it probably came in response to the actions of their neighbors.

Many of the people who were already living in Jackson County had a different idea about what it meant to observe the Sabbath than the early Saints. A traveler to western Missouri in 1833, for example, stated that “the only indications of its being Sunday” in the area was “the unusual Gambling & noise, & assemblies around taverns.”2 It was in this context that the Lord revealed that observing the Sabbath would help keep the saints “unspotted from the world” (Doctrine and Covenants 59:9). 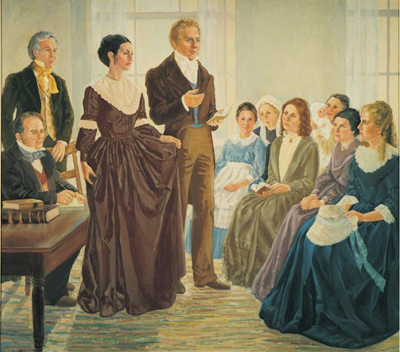 Significantly, like Doctrine and Covenants 59, Mosiah 18 also emphasizes the Sabbath. For example, shortly after baptizing those that had come out to him, Alma “commanded them that they should observe the sabbath day, and keep it holy” (Mosiah 18:23). These words come from the Ten Commandments, which Alma had heard the prophet Abinadi quote to King Noah and his distinctly unholy priests. Like Alma’s instructions to his people, Doctrine and Covenants 59:10 similarly goes on to state that on the Lord’s “holy day,” the Sabbath, the saints should rest “from their labors” and pay their “devotions unto the Most High.”5

For Alma’s people, “there was one day in every week that was set apart that they should gather themselves together to ... worship the Lord their God” (Mosiah 18:25). The Lord told the saints in this dispensation that “on this, the Lord’s day, thou shalt offer thine oblations and thy sacraments unto the Most High” (Doctrine and Covenants 59:12).6 This shows that in both cases, the people were told to gather together to worship one day a week. Yet both texts also emphasize that “every day they should give thanks to the Lord their God” (Mosiah 18:23), or, as the Doctrine and Covenants puts it, “thy vows shall be offered up in righteousness on all days” (Doctrine and Covenants 59:11).7

In many ways, it makes sense that the Lord would emphasize the Sabbath as a way to help people create a new identity in a new place.8 When the people were coming out to Alma to be baptized, they were leaving their temple behind (Mosiah 11:10). This sacred space would likely have been a very important part of these people’s lives. However, Alma seems to have been reminding them that even though they left their sacred space (the temple) behind, they could still take sacred time (the Sabbath) with them wherever they went. This seems to have been an ancient Israelite idea as well.9 In addition, the fact that keeping the Sabbath is so unusual allows any group that keeps it to remain somewhat distinct.10 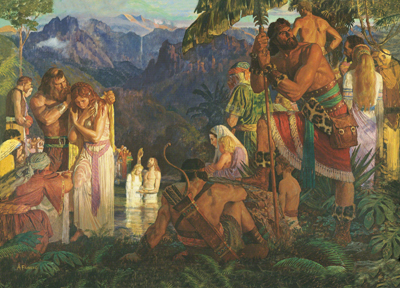 Alma Baptizes in the Waters of Mormon by Arnold Friberg

Near the end of Doctrine and Covenants 59 the Lord stated, “Behold, this is according to the law and the prophets; wherefore, trouble me no more concerning this matter” (Doctrine and Covenants 59:22). Although “the law and the prophets” are two of the divisions of the Old Testament, the phrase is often used simply to refer to the scriptures.11 Perhaps Mosiah 18 was one of the scriptures the Lord may have had in mind when He made this statement.

As the Book of Mormon and the Doctrine and Covenants demonstrate, the Sabbath can be a force for good in the lives of all those who observe it. It can help people to avoid worldly influences and to remain distinct from those influences.12 In addition, the Sabbath allows people to experience sacred time, even if they may live too far from a temple or chapel to experience sacred space on a regular basis.

What did the Savior mean when He said that “the sabbath was made for man, and not man for the sabbath”? I believe He wanted us to understand that the Sabbath was His gift to us, granting real respite from the rigors of daily life and an opportunity for spiritual and physical renewal. God gave us this special day, not for amusement or daily labor but for a rest from duty, with physical and spiritual relief.13

The Book of Mormon and Doctrine and Covenants affirm that the principles behind the Lord’s distinctive commandment to His ancient covenant peoples regarding the hallowing of one day in seven are still alive and in effect in this dispensation of the Gospel. The people of God today should give to Him one day each week, dedicating their time to worshipping and serving the Lord. Modern readers can, and will, experience the many blessings promised in the scriptures if they will observe and keep this inspired guidance by lovingly dedicating His day each week to Him and His wishes, as He has gently invited and instructed His people to do.14

Joseph F. Darowski, “The Journey of the Colesville Branch,” in Revelations in Context: The Stories Behind the Sections of the Doctrine and Covenants (Salt Lake City, UT: The Church of Jesus Christ of Latter-day Saints, 2016), 40–44.