Why Don't We Know the Names of the Angels in the Book of Mormon?

Balaam and the angel, painting from Gustav Jaeger, 1836 via Wikipedia
“Behold, an angel of the Lord came and stood before them, and he spake unto them.”

After the Israelites left Egypt, they traveled through the country of the Moabites on their way to the promise land (Numbers 22:1). The king of the Moabites was afraid of the Israelites and asked a prophet named Balaam to curse them (vv. 3–6). As Balaam was on his way to do so, “the angel of the Lord” stopped him, sword in hand (v. 22–23). However, this angel did not do what we might have expected him to do: mention who he was. This may seem strange to modern readers who are used to knowing the names of angels, such as Gabriel, Raphael, and Michael. However, angels in the early books of the Old Testament almost always go unnamed.1

As biblical scholar Carol A. Newsom has noted, “in contrast to later writings,” texts from before the destruction of Jerusalem by the Babylonians “exhibit almost no interest in the heavenly messengers themselves. They are not individuated in any way. They do not have personal names.”2 Angels play a significant role in 29 chapters of these pre-exilic portions of the Bible.3 In all of these instances, the angels are referred to simply as an “angel of God” or an “angel of the Lord,” except in one instance when the angel is described as the “angel which redeemed me from all evil” (Genesis 48:16).4

In fact, it is sometimes difficult even to tell the difference between an angel and God Himself. In Exodus 3:2–4, for example, “the angel of the Lord” appeared to Moses “in a flame of fire out of the midst of a bush. ... And Moses said, I will now turn aside, and see ... why the bush is not burnt. And ... God called unto him out of the midst of the bush, and said, Moses, Moses. And he said, Here am I.” In these verses, it seems clear that the “angel of the Lord” is actually God Himself.5 Eventually, named angels would become more common. In the book of Daniel and the New Testament, one begins to find angels being referred to by name, but when Lehi left Jerusalem, biblical texts rarely recorded the names of angels.6 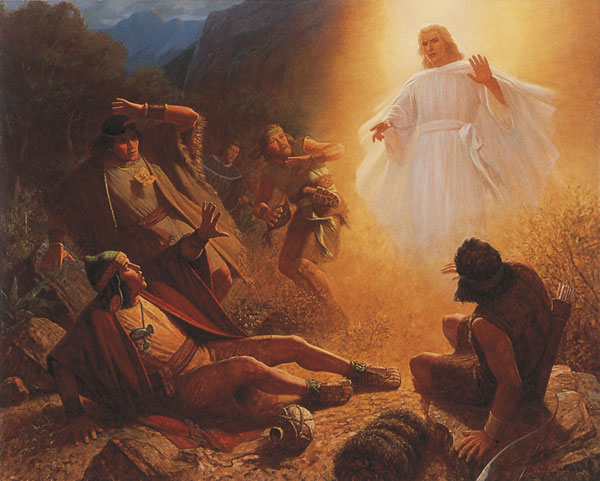 Conversion of Alma the Younger by Gary L. Kapp

The way angels are depicted in the Book of Mormon and the Old Testament reminds us of an important truth: the identity of the person speaking truth is sometimes less important than the truths being spoken.

In life, we often find ourselves in situations where we are being taught by various people. Some of these people might be ministering brothers and sisters sharing a message or members of our congregations giving a talk in sacrament meeting. At other times, we might be taught by the wise words of a small child or a grandparent. At times, even the words of strangers can be surprisingly impactful.10 Yet in all these cases, focusing more on the messenger than the message could cause us to miss something important.

By listening with the Spirit to those around us, regardless of their identity, we can learn profound truths from the people we interact with every day. The people that had encounters with angels in the Old Testament and the Book of Mormon did not record the names of the angels that were communicating with them. But that did not matter. What mattered is that they were messengers from God, sent to tell them something important.

The angel speaking to Balaam spoke for God, and Balaam treated him accordingly, regardless of his actual identity. We could do the same in our own lives, listening carefully to those around us and applying the truths they teach us to our own lives, no matter who they are.