Mayan Art depicting a royal entry. Image via the Maya Vase database
“Now the king had commanded his servants, previous to the time of the watering of their flocks, that they should prepare his horses and chariots, and conduct him forth to the land of Nephi; for there had been a great feast appointed at the land of Nephi”

In the minds of most people today, the word chariot conjures up images of warriors riding two-wheeled, horse drawn war-chariots into battle. In the Book of Mormon, however, chariots are never actually mentioned in a battle context.1 Sifting out references to Old World quotations,2 there are only three occasions wherein chariots appear in the Book of Mormon:

These few references all occur within a small window of time from ca. 90 BC–AD 16, suggesting that, overall, chariots were not widely or frequently used among Book of Mormon peoples.5 Only two of these are in a definable context: both times when Lamoni asks for his chariots to be prepared, “the occasion is a formal state visit.”6 While “horses” are mentioned with chariots, chariots are never explicitly pulled by horses or any other animal. 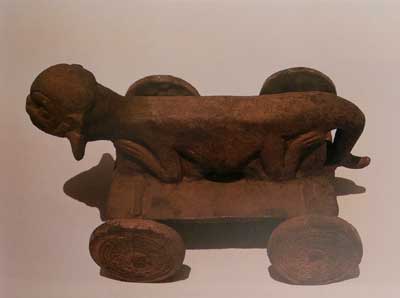 Due to the limited use and reference, it is hard to be certain about the nature of chariots in the Book of Mormon. Wheeled vehicles, as chariots are typically assumed to be, are thus far unattested for any part of pre-Columbian America. Nonetheless, in the late 19th century, pioneering archaeologist Désiré Charnay reported finding what he called “chariots” in central Mexico.7 To be sure, what Charnay found were wheeled figurines or “toys,” nothing that could actually be ridden on. About 100 such figurines are known,8 largely dated between AD 600–1250.9

Careful study of these figurines “demonstrate that at least some Mesoamericans grasped not only the concept of the wheel but also the concept of actual wheeled vehicles.”10 According to a pair of non-LDS Mesoamericanists, these figurines demonstrate that “the principle of using wheels to facilitate horizontal movement was familiar to at least some peoples of Pre-Columbian Mesoamerica.”11 In the ancient Near East, similar figurines are known to have “imitated full-scale wagons,”12 suggesting, perhaps, that the same is true in Mesoamerica.13

Alternatively, Charnay’s unconventional use of the word “chariot” invites other possibilities. The rare Hebrew word afiryon, meaning litter, palanquin, or sedan chair,14 is translated as “chariot” in the KJV (Song of Solomon 3:9). This was a non-wheeled vehicle wherein a rider was carried by servants. Just such litters or palanquins were known among pre-Columbian Mesoamericans. “Maya kings were borne in litters, often made of simple rushes and carried by just two bearers.”15 John L. Sorenson noted, “This form of transport was reserved for nobility and others of the upper social levels.”16 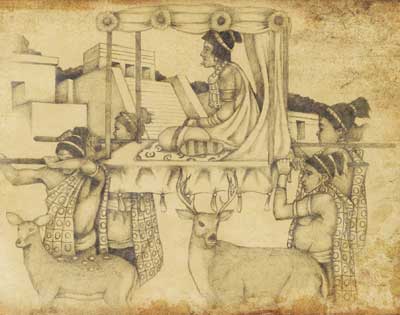 These litters were used for royal processions and nobles or dignitaries making a political visit. For instance, in 1542, after the Spanish conquest of the Maya region, “A throng of warriors escorting a young Maya lord seated in a palanquin” approached some Spanish sentries, “made signs that he had come in peace” and that he had brought food in what was apparently a diplomatic visit.17

A Classic Maya vase depicting the sacrifice of war prisoners shows a “visiting dignitary” who was “brought to the event in a litter.”18 The earliest known depiction of a Mesoamerican litter is Izapa Stela 21, dated to ca. 300–50 BC.19

With a litter, servants or bearers would “conduct [the king] forth” (Alma 18:9) in a royal procession. While no horse or draft animal was used to pull or carry the litter, an animal was commonly depicted traveling near the litter as part of the procession. For instance, LDS Mesoamericanist Mark Wright has pointed out that several Classic Maya vases depict a dog underneath the litter traveling as part of the entourage.20

Brant A. Gardner thus proposed, “The plausible underlying conveyance in the story of Ammon was a royal litter, accompanied in peacetime by the spiritual animal associated with the king.”21 In other words, Ammon would have prepared “horses” to travel with the king, while the servants “conduct him forth to the land of Nephi” (Alma 18:9) in his litter.

There are not always definitive answers to questions some may have about the Book of Mormon. These unsolved puzzles invite both faith and further learning if they are approached with patience, careful reading, and an open mind. Just as with the occurrence of the word “horse” in the text, there are opportunities to learn, explore, wonder, and grow in faith.22

The current state of archaeological knowledge is limited,23 and caution must be taken when evaluating negative evidence. LDS Mesoamerican archaeologist John E. Clark once explained: “Positive and negative evidence do not count the same,” because, “Given current means of verification, positive items are here to stay, but negative items may prove to be positive ones in hiding.”24 Several things mentioned in the Book of Mormon once considered missing have since proven to be in the right place at the right time all along.25 “It is in this light,” concluded Clark, “that we should consider many arguments against the Book of Mormon.”26

Archaeology currently shows that some peoples in pre-Columbian Mesoamerica did understand the conceptual principles behind wheeled vehicles, although there is no evidence that these were actually put into practice. Still, over a 600-year period (ca. AD 600–1250), it is likely that at least some attempt, however limited and short lived, would have been made to put the wheel into practical use. 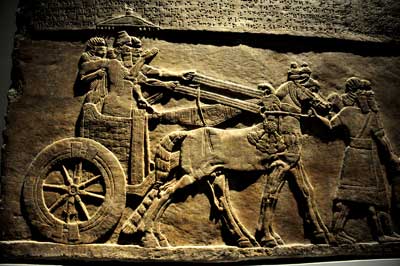 Perhaps the brief time-period (the first centuries BC and AD) wherein chariots are mentioned in the Book of Mormon represents just such a limited, short-lived attempt, albeit at a much earlier time than current evidence for the wheeled figurines. Then the Nephites and Lamanites abandoned the technology because it lacked any practical advantages.27 A brief attempt at using the wheel that is quickly abandoned would be very difficult to find in the archaeological record.

Exploring the possibilities for chariots also reinforces the importance of reading scripture with an open mind. It takes humility and maturity to step away from long-held assumptions and read the scriptural text from a fresh perspective. Nonetheless, doing so while exploring questions in a historical context can provide clarity and understanding to Book of Mormon passages. As Charnay and the KJV translation of afiryon demonstrate, “chariot” can have broader meaning than what might typically come to mind. That usage can include non-wheeled vehicles like the litters used all throughout Mesoamerica clear back into Book of Mormon times.

Although this paints a very different image than what most readers have come to expect, conventional use of litters in Mesoamerica is consistent with the uses of chariots in the Book of Mormon. Furthermore, if Ammon was expecting to be one of the bearers of King Lamoni’s litter, thus having to “conduct him forth to the land of Nephi” on his shoulders (Alma 18:9), such a visual adds another layer of humility to this great missionary. He was literally willing to bear and carry those he had been called to serve.