Why Did the Servants Present Lamoni with the Arms of His Enemies? 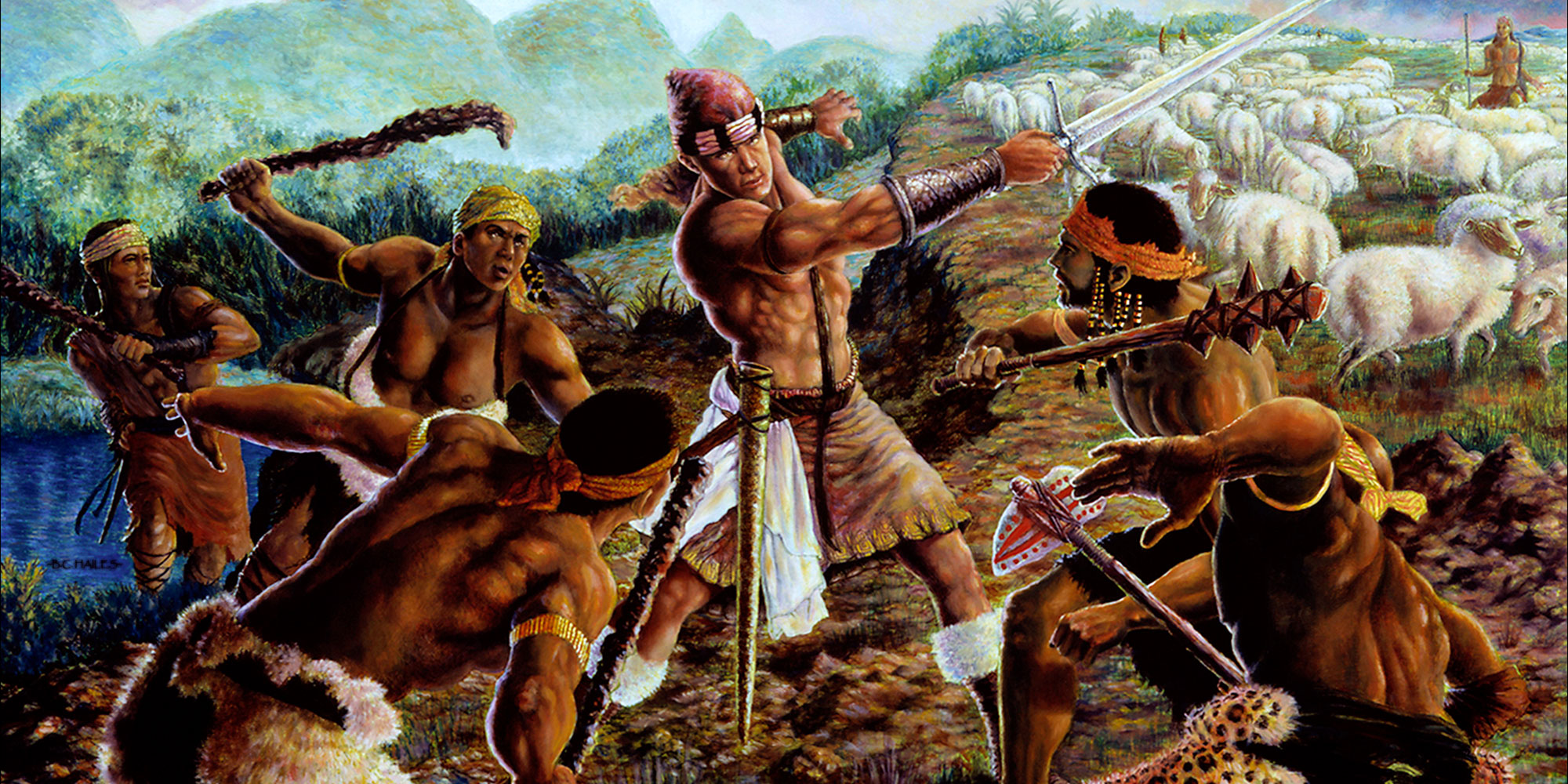 "Defending the Flocks" by Brrian C. Hailes
“[The servants] went in unto the king, bearing the arms which had been smitten off by the sword of Ammon, of those who sought to slay him; and they were carried in unto the king for a testimony of the things which they had done”

Hugh Nibley observed, “The whole affair at the waters of Sebus must strike anyone as very strange.”1 Few details are stranger, perhaps, than envisioning Ammon’s fellow servants bringing a pile of severed arms to present to the king. Ammon had consciously “slew none with the sword save it were their leader” (Alma 17:38),2 but he “smote off their arms with his sword,” seemingly with a single blow (v. 37).3 The servants then diligently took the arms “unto the king … for a testimony of the things which they had done” (v. 39).

One recent reader has proposed that “arms” should be interpreted as weapons,4 in part because “the image of a servant dragging a blood-soaked bag across the floor of the king’s palace in order to show him the gory amputated limbs of his enemies seems somewhat fanciful.”5 Yet, a pair of LDS scholars long ago noted, “The practice of cutting off the arms or other body parts of enemies, specifically as a testimony of the conquest of victims, is attested in the ancient Near East.”6 The severed body parts (typically heads or hands) would then be “sent on as evidence and trophies of the success” of a warrior in battle.

Ancient depictions7 show soldiers “heaping them up in triumph,” in order to tally the dead or to entitle mercenaries to be paid. This was, according biblical scholars Cyrus Gordon and Gary Rendsburg, “a routine procedure all through the ancient Near East,” and “symbolized victory in battle.”8 In recent archaeological excavations in Egypt, pits containing over a dozen right hands were found in the proximity of a Hyksos palace, which renowned archaeologist and Egyptologist Manfred Bietak had stated were evidence of the “gold of valor” ceremony, where soldiers presented the hands of conquered enemies and received gold as a reward.9 Judges 7:25 and 8:6 indicate that the early Israelites engaged in such practices, which are well attested in Egyptian, Canaanite, and Mesopotamian sources.10 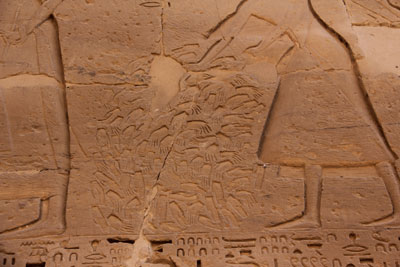 Switching over to the New World,11 in the Popul Vuh, the ancient traditions of the Quiché Maya,12 the mythic hero twins fight the bird-demon Seven Macaw. During the conflict, one of the twins attempted to grab Seven Macaw, “but instead Seven Macaw tore off the arm” of the twin, went home and “hung the arm” over the fire, “until [the twins] come to take it back.”13 This story is depicted on Izapa Stela 25, complete with hero twin’s severed arm, which dates to ca. 300–50 BC.14 One classic Maya vase (ca. AD 250–900) also depicts a bowl of arms and other human remains being presented to a deity. Anthropologists Ana Luisa Izquierdo y de la Cueva and Maria Elena Vega Villalobos state that this scene is a representation of “triumphs over enemies.15” Although mythological, these examples likely reflect actual Maya attitudes and practices in war and conflict.

Although much later than the time of Ammon, there is also some indication of similar practices among the Aztecs.16 In the account of the Mexican conquest left by conquistador Bernal Díaz, “Aztec warriors held aloft the severed arms of the victims as they taunted and threatened the Spanish and their native allies who were within earshot.”17 Díaz specifically stated that the Aztecs “threw them roasted legs of Indians and the arms of our soldiers” and jeered, “Eat of the flesh of … your brothers.”18

Like the ancient Near East, these Aztec and Maya sources portray the severed arms of an enemy as “a trophy of their valor.”19 The limbs are used to boast in one’s prowess as a warrior, taunt one’s enemies, and prove one’s bravery and achievements. 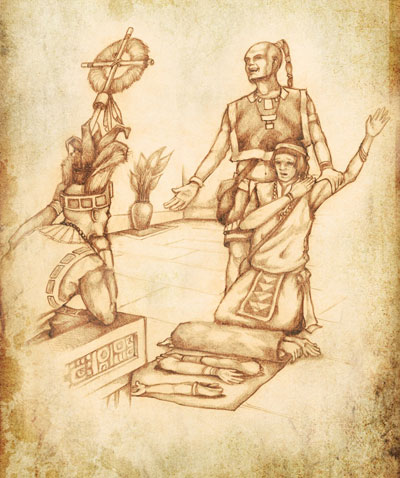 In light of these ancient Near Eastern and Mesoamerican practices, the servants bringing the severed arms to King Lamoni as “a testimony” of the events they witnessed seems far less fanciful than at first glance. Instead, it would appear that “the astounded servants of King Lamoni, who took the arms that Ammon had been cut off into the king” were acting conventionally, according to custom.20 As one would expect, the pile of “war trophies” greatly impressed King Lamoni. He was “astonished exceedingly” to the point that he suspected Ammon was “more than a man” (Alma 18:2). The servants were convinced “he cannot be slain by the enemies of the king” (v. 3).

The unusual part of the story is that Ammon himself did not bring the arms to the king to prove how great a warrior he was. As Robert L. Millet and Joseph Fielding McConkie pointed out, “Ammon, whose power was heaven-sent, sought no honor for himself.”21 This fact is made all the more apparent by understanding the honor and glory he could have sought with the arms of his enemies as proof of his great strength. As John Lundquist and John Welch have further reasoned, “the fact that the evidence was presented to the king, which could have entitled him to payment, heightens all the more the fact that Ammon sought no recognition or reward.”22

With this background in mind, Ammon’s own words to his brother Aaron take on greater significance: “I do not boast in my own strength, … but I will boast in the strength of my God” (Alma 26:11–12). Ammon had ample opportunity to boast in his own strength after the episode at the Waters of Sebus. Instead, Ammon went about doing as he had been told, feeding the king’s horses, which further impressed King Lamoni (Alma 18:9–11).

The Lord’s blessings were poured out upon Ammon because he acknowledged God’s hand in all things. His humility, combined with the powerful impact of those arms as undeniable proof of his greatness in their cultural expectations, no doubt contributed to why Ammon was able to “convert a king and, through him, a people.”23

John M. Lundquist and John W. Welch, “Ammon and Cutting Off the Arms of Enemies,” in Reexploring the Book of Mormon: A Decade of New Research, ed. John W. Welch (Salt Lake City and Provo, UT: Deseret Book and FARMS, 1992), 180–181.