What if Martin Harris Didn’t Lose all of the 116 Pages? 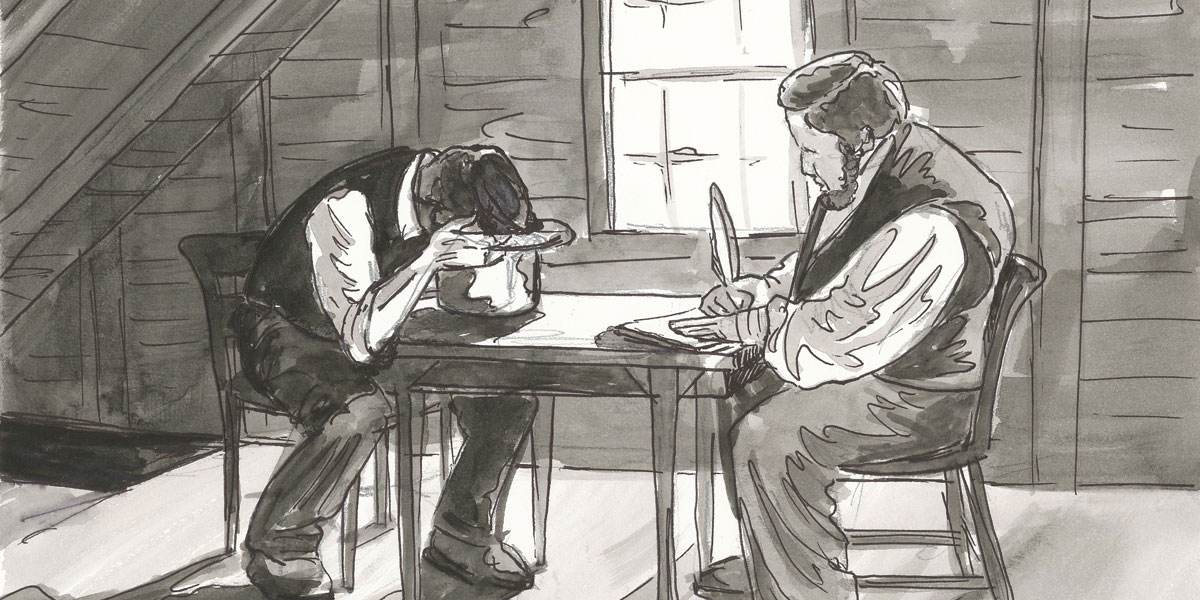 Translating with Martin by Anthony Sweat
"Wherefore, with the help of these, king Benjamin, by laboring with all the might of his body and the faculty of his whole soul, and also the prophets, did once more establish peace in the land. And now there was no more contention in all the land of Zarahemla, among all the people who belonged to king Benjamin, so that king Benjamin had continual peace all the remainder of his days."

Most readers of the Book of Mormon know the story of Martin Harris and the 116 lost pages, and many of us would probably like to read something from those pages. Though we probably will not be able to do that anytime soon, we may be able to do the next best thing: read the “retained portion,” or what the Lord called “that which you have translated, which you have retained” (Doctrine and Covenants 10:41, emphasis added).

This revelation given to Joseph after he lost the 116 pages suggests that some of the original translation may yet be preserved in our current Book of Mormon. Some scholars, like Jack M. Lyon and Kent R. Minson, believe they have identified what that retained portion was: Words of Mormon 1:12–18.1

The idea behind this theory is that our current version of Mosiah starts in chapter 3 and Martin Harris lost most of the first two chapters of Mosiah with the rest of the 116 pages. But part of the original Mosiah 2 may have survived and mislabeled as part of Words of Mormon. 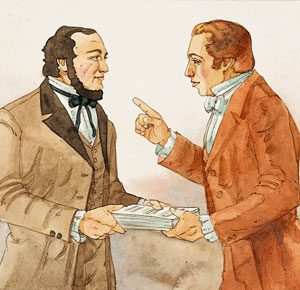 Joseph Smith giving Martin Harris the 116 pages of the manuscript. Image via lds.org

This proposal is based on a careful reading of Words of Mormon,2 combined with evidence from the printer’s manuscript. One of the most confusing things about the Words of Mormon is that it seems to end in the middle: verse 11 reads, “And I know that [the plates] will be preserved; for there are great things written upon them, out of which my people and their brethren shall be judged at the great and last day, according to the word of God which is written.”3

This would be a perfectly good ending to Words of Mormon, yet it continues with something seemingly unrelated, “And now, concerning this king Benjamin—he had somewhat of contentions among his own people.”4 It then continues to talk about King Benjamin for the next six verses without coming to a conclusion.

The beginning of Mosiah is almost as unusual as the end of Words of Mormon. It does not include the usual introduction that is seen in the other books in the large plates (like the introduction to the book of Alma, for example).5 It just continues to talk about King Benjamin, seemingly where Words of Mormon left off.6 In fact, if one reads Words of Mormon 1:18, and Mosiah 1:1 together, they flow quite well:

king Benjamin, by laboring with all the might of his body and the faculty of his whole soul, and also the prophets, did once more establish peace in the land. And now there was no more contention in all the land of Zarahemla, among all the people who belonged to king Benjamin, so that king Benjamin had continual peace all the remainder of his days.

A copy of the original Book of Mormon manuscript that Oliver Cowdery made, called the printer’s manuscript, also suggests that this might be the case.7 Lyon and Minson noted: 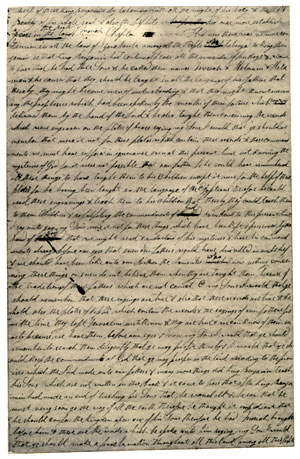 Image of the Printer's Manuscript of the Book of Mormon, with “Mosiah Chapter III highlighted”

As Oliver Cowdery copied the text of the original Book of Mormon manuscript into the printer’s manuscript, he encountered a problem early in the book of Mosiah ... He had faithfully copied the chapter designation ‘Chapter III’ from the original manuscript, but where were Chapter I and Chapter II? The previous heading was ‘The Words of Mormon,’ with no other chapters intervening. Oliver fixed the problem as best he could, inking out the last two characters of ‘Chapter III’ (making it ‘Chapter I’) and inserting ‘Book of Mosiah’ above the line.8

While it may seem odd to only lose part of a chapter, this could be explained by the way the 116 pages were likely put together.

Lyon and Minson have noted that “the original Book of Mormon manuscript was not a stack of separate pages.” It was actually made up of “gatherings of (usually) six large sheets of paper folded lengthwise and held together with string.” The 116 pages were probably “five such gatherings, four with six sheets (and thus twenty-four pages each) and one with five sheets (and thus twenty pages).”9

Royal Skousen has concluded that the next gathering would have contained part of the original second chapter of Mosiah.10 Thus, when Martin took the first five gatherings with him, he left part of Mosiah 2 behind because it was on the next gathering, thus leaving a portion behind.

Later, when Oliver was making the printer’s manuscript, he copied down Words of Mormon and then went straight into the remaining portion of Mosiah 2 without noticing at first, since it was on the beginning of the next gathering. He only noticed something was wrong when he got to the chapter break and found that the headings for Mosiah chapters 1 and 2 were missing. After altering chapter 3 to read chapter 1, he unknowingly left the remaining part of chapter 2 in Words of Mormon.11 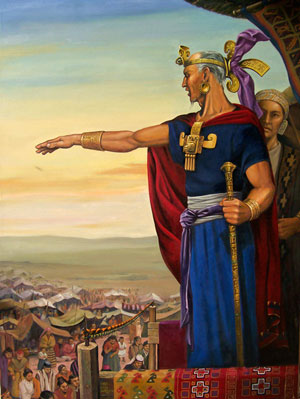 This reading also shows the long-lasting effects of a righteous king and true prophets on the society.14  Once King Benjamin and the prophets “did once more establish peace in the land” (Words of Mormon 1:18), King Benjamin “had continual peace all the remainder of his days.” 15 After King Benjamin’s armies had dealt with external threats, he then dealt with internal problems, such as false prophets.16 Reading these texts together shows that his own preaching and that of the true prophets led to a peace that  lasted until his death.

When we read the Book of Mormon carefully, even the small details begin to shape our understanding of the gospel. Understanding the relationship between Words of Mormon and Mosiah can help us all to understand King Benjamin and the Book of Mormon a little bit better. Even though we may not be able to read from the 116 pages, knowing that Words of Mormon 1:12–18 might be a small portion of what Joseph and Martin translated together changes the way we read these verses.

Brant A. Gardner, “When Hypotheses Collide: Responding to Lyon and Minson’s ‘When Pages Collide’,” Interpreter: A Journal of Mormon Scripture 5 (2013): 105–119.