Were There “Fiery Flying Serpents” along Lehi’s Trail? 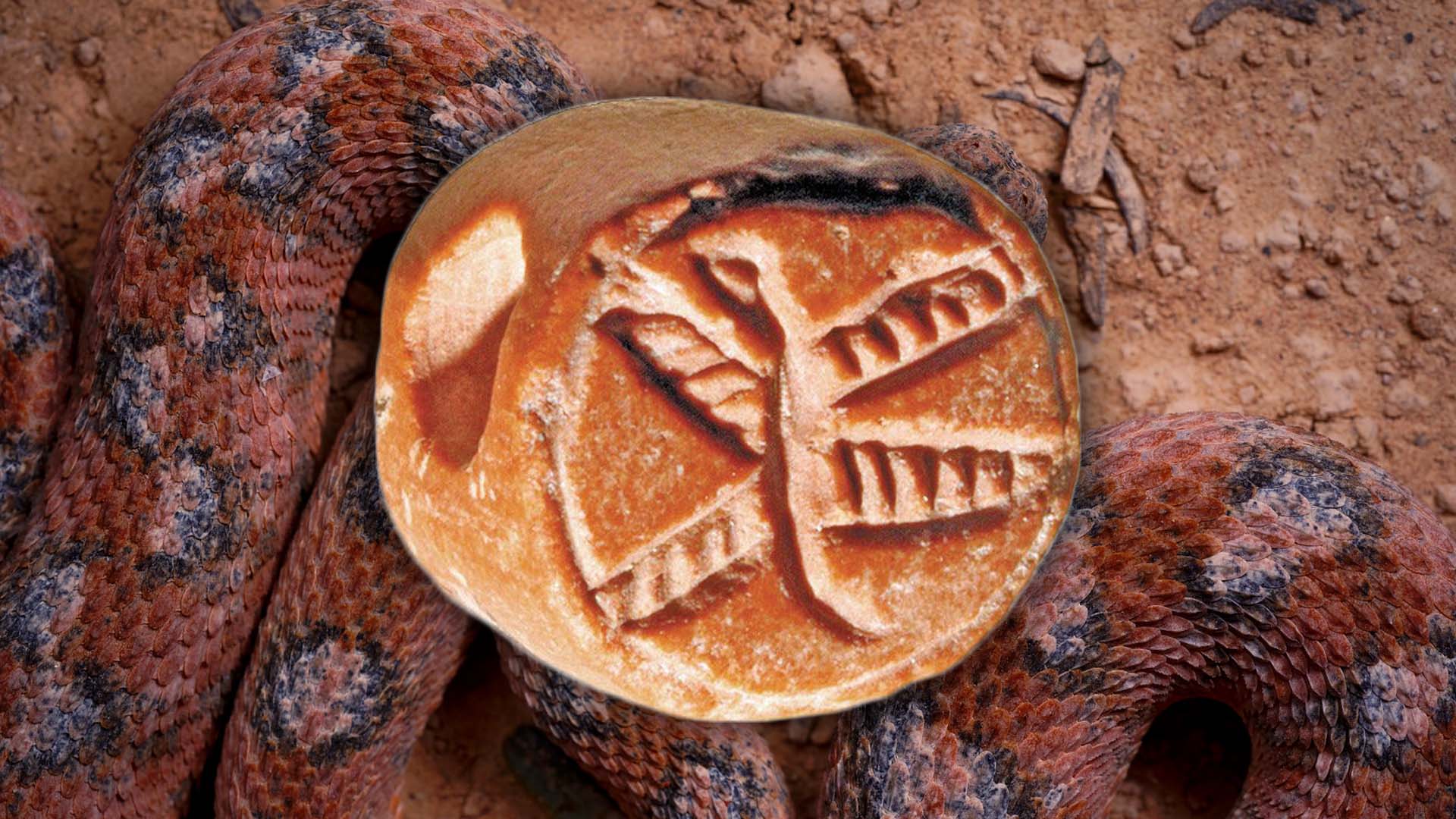 An ancient Israelite stamp seal impression with a flying serpent. Photo of a Palestinian saw-scaled viper by Matthieu Berroneau.
“He sent fiery flying serpents among them; and after they were bitten he prepared a way that they might be healed.”

As Nephi planned and prepared to build a ship, his brothers mocked him, saying he was a fool for thinking he could “build a ship … [and] cross these great waters” (1 Nephi 17:17). In response, Nephi reminded his brothers of several of the miracles the Lord performed during Israel’s Exodus from Egypt (see 1 Nephi 17:23–42), including the sending of “fiery flying serpents among them” and then, after they repented, providing the means by which “they might be healed” (1 Nephi 17:41). Modern readers may not readily appreciate how relevant this story was to Lehi and his family’s own circumstances at the time.

The Israelites’ encounter with the “fiery serpents” occurred in the region around the Gulf of Aqaba, a branch of the Red Sea (Number 21:4–9).1 Isaiah later characterized the “fiery flying serpent” as one of “the beasts of the south,” with “south” (negev in Hebrew) referring to the desert region of southern Judah (Isaiah 30:6).2

Biblical texts are not the only sources to describe this as a region infested with flying serpents. An account of the Assyrian king Esarhaddon (ca. 680–669 BC) describes traveling past “yellow snakes spreading wings” in this same region.3 The Greek historian Herodotus (ca. 484–425 BC) also reported hearing stories about “winged serpents” living in the Sinai/Arabian desert and even claimed to have seen the skeletal remains of some.4

All of these sources indicate that the desert regions to the south of Jerusalem were the primary habitat of fiery and/or flying serpents.5 This is the same region Lehi and his family passed through as they fled from Jerusalem, going down to the “borders near the shore of the Red Sea” and setting up a long-term camp along the shores of the Gulf of Aqaba (1 Nephi 2:6).6

Nephi and his brothers then traveled back through this region multiple times as they twice journeyed to and from Jerusalem (1 Nephi 3–5, 7). The family remained encamped near this area, at a site they designated the Valley of Lemuel, until the Lord commanded Lehi to leave (1 Nephi 16:9–11). Thus, as Neal Rappleye observed, “the bulk of the narrative in 1 Nephi takes place in this region between Jerusalem and the Red Sea, in the midst of the traditional habitat associated with the winged seraph-serpents.”7

Based on the details in biblical, historical, and archaeological sources, Israeli biblical scholar Nissim Amzallag argued that the “fiery flying serpent” should be identified with the saw-scaled viper (Echis coloratus), a venomous snake whose habitat includes most of western Arabia still today.8 If this correlation is correct, then Lehi and his family likely would have continued to encounter “fiery flying serpents” (the saw-scaled viper) even as they journeyed farther south into the Arabian wilderness.9

Nephi referenced the fiery flying serpents while the family was staying in Bountiful (1 Nephi 17:41), which was most likely located in the frankincense-producing region of Dhofar in Oman.10 According to Herodotus, in this area “great numbers of winged serpents … carefully guard each [frankincense] tree.”11 Other classical Greek sources also mention these snakes.12 Based on the details in these accounts, Amzallag has argued that these are also referring to the saw-scaled viper, which is known to live in both Yemen and the Dhofar.13

The South Arabian cultures that controlled the frankincense trade had serpent-related symbols and traditions similar to those found in Israel, including the production of bronze snake artifacts reminiscent of Moses’s brazen serpent.14 Thus, while in Bountiful Lehi’s family was still within the habitat of—and among cultures influenced by—the fiery flying serpents.

Scholars have long noted the presence of Exodus motifs throughout Nephi’s account of his family’s wilderness journey.15 Recognizing how the environment they traveled through overlapped with and was similar to that of the Israelite Exodus—including the same wildlife, such as the saw-scaled viper—brings to life how palpably like the Exodus the family’s journey must have seemed to the group of Israelite travelers. They faced the same dangers and similarly had to rely on the Lord for their protection. This is especially evident when considering the story of the fiery (flying) serpents.16

As several scholars have previously noted, in Numbers 21:4–9, the fiery serpents act as agents of the Lord, sent by Him to afflict Israel and bring them to repentance.17 According to some scholars, the nuances of the Hebrew imply that the serpents were released or let go by the Lord, thereby implying they were an ever-present danger that the Lord held at bay to protect Israel but were released due to Israel’s disobedience.18

As ancient Israelites, Lehi and his family would have shared this belief that the fiery flying serpents that they encountered on their journey were agents of the Lord. This made Nephi’s reference to that story an especially potent reminder of the real dangers the family could face if they did not heed the Lord’s counsel. As Rappleye has noted:

When Nephi reminded his brothers of the “flying fiery serpents” sent by the Lord to chastise the children of Israel for their murmuring (1 Nephi 17:41), it would have held a relevance that is often lost on readers today: they, too, were traveling and camping in the regions believed to be infested by flying serpents, and if they were not faithful, the Lord could just as easily punish them by unleashing those dangerous snakes.19

Yet this also came with a reminder of the Lord’s grace: just as the Lord had “prepared a way that [the Israelites] might be healed” by looking upon the brazen serpent (1 Nephi 17:41; see Numbers 21:6–9), so too could Laman and Lemuel and the rest of Lehi’s family be healed and protected if they would only repent and look to the Lord (see Alma 33:19–22; 37:38–47). This same blessing of healing and protection through Jesus Christ’s Atonement remains available to all today who look to the Lord and follow Him.

Neal Rappleye, “Serpents of Fire and Brass: A Contextual Study of the Brazen Serpent Tradition in the Book of Mormon,” Interpreter: A Journal of Latter-day Saint Faith and Scholarship 50 (2022): 217–298.