Why Did Isaiah Refer to the Heavenly Hosts as “Seraphim”? 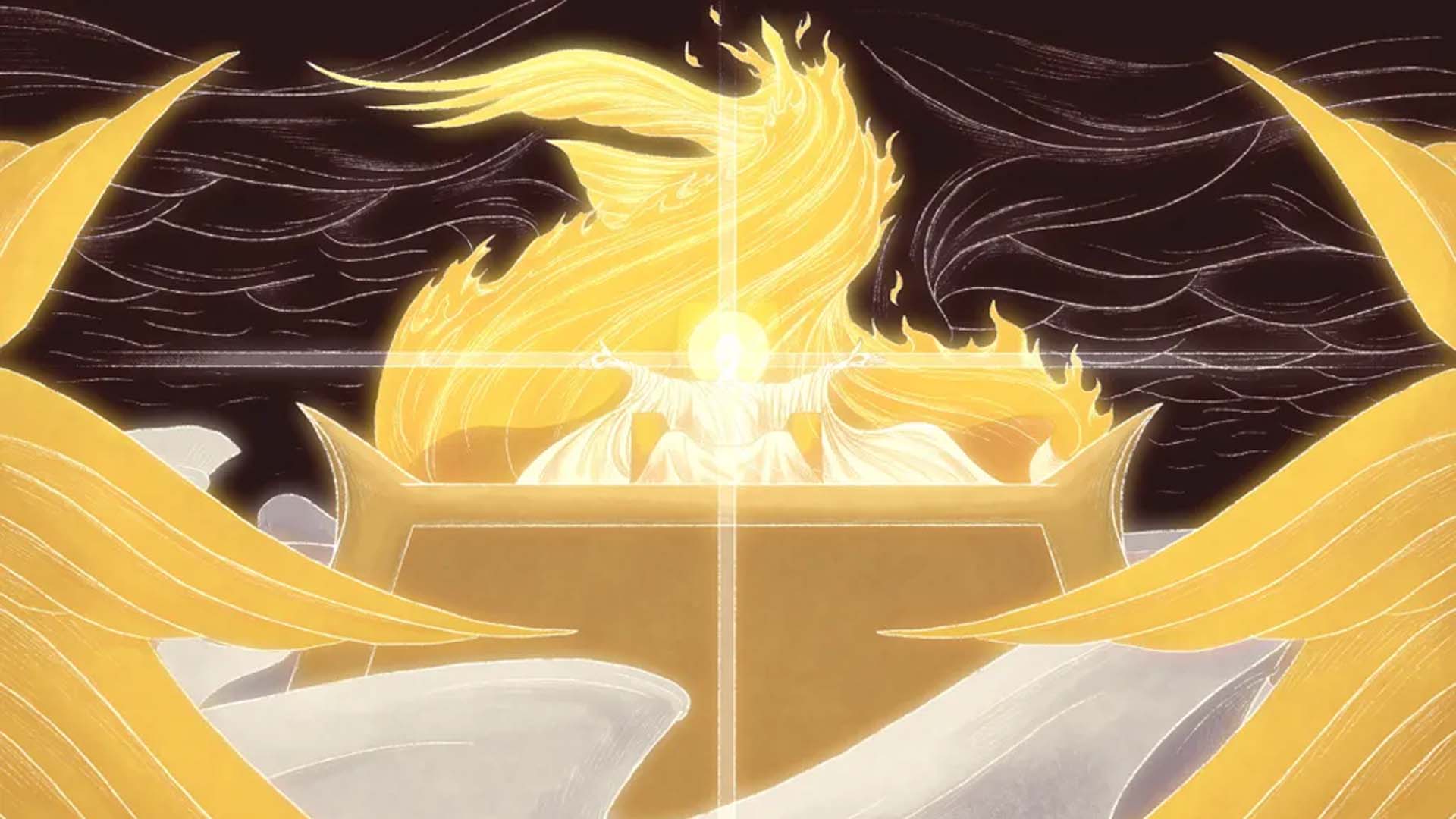 In many ways, Isaiah’s vision of God on His throne (Isaiah 6; 2 Nephi 16) is representative of biblical throne theophanies, which often include members of the divine council or heavenly hosts surrounding the throne and singing praises to God (compare also Lehi’s vision in 1 Nephi 1:8).1 Isaiah’s language is unique, however, in identifying the angelic beings surrounding God’s throne as seraphim, the plural form of the Hebrew word seraph (Isaiah 6:2; 2 Nephi 16:2). Many scholars of the Hebrew language and the ancient Near Eastern world have explored what this word might mean and the nature of these heavenly beings.

Several scholars have noted that seraph is related to a Hebrew verbal root that means “to burn” and thus may refer to the fiery appearance or nature of the angelic hosts.2 For instance, Donald W. Parry explains, “Based on the Hebrew root saraph (‘to burn’), the term seraph may be translated ‘burning one’ or ‘bright shining one,’ referring to the seraphs’ glorious condition and location near the Lord’s throne.”3 Similarly, William B. Nelson said that the seraphim were “probably so called because they shone brightly like fire.”4 Joseph Smith correctly understood this aspect of these beings when, as part of the Kirtland Temple dedication, he prayed  “that we may mingle our voices with those bright, shining seraphs around thy throne” (Doctrine and Covenants 109:79; emphasis added).5

Some scholars have also noted that the term seraph is used elsewhere in the Old Testament—including in other passages of Isaiah—to refer to “fiery serpents,” such as those that bit the Israelites in the wilderness.6 This has led some scholars to propose that the seraphim of Isaiah’s vision were somehow related to these serpents.7 According to Nelson, for example, “The seraphim were most likely serpentine in shape.”8 John Gee and other scholars have pointed out that numerous seals from Isaiah’s day depict snakes with multiple sets of wings, similar to the description of the seraphim in Isaiah 6:2.9 “These seals and sealings from Israel match the biblical description of the seraphim.”10

The thought of flying snake-like beings standing near the presence of God may indeed seem strange to modern readers, but it would have been consistent with the expectations of an ancient Near Eastern audience. As Gee has explained, “In Isaiah’s account, the seraphim are located above the throne. This follows Egyptian temple iconography, where rows of serpents are depicted above the shrine of the deity.”11 Likewise, two Israelite bronze bowls depict divine symbols (such as the tree of life) flanked on both sides by winged serpents.12

Serpents had many symbolic associations to people of the ancient Near East that can help us understand several of the roles and functions of seraphim.13 For example, serpents could serve as guardians or gatekeepers to sacred spaces, preventing the impure from entering holy places.14 They were also often represented as divine messengers and intermediaries.15 The “fiery serpents” could also be associated with purification and atonement.16

Each of these meanings is reflected in the role of the seraphim in Isaiah 6, and thus understanding these ancient Near Eastern symbolic associations of serpents can better help modern readers of scripture understand the scene in Isaiah 6 and why that prophet would use a term associated with serpents to describe these heavenly beings.

No one would want to stand before God in an impure state or to try to enter into His presence uninvited or unapproved. As Isaiah witnessed the heavenly scene of the Lord on His throne, he feared that he would be “undone” because he, “a man of unclean lips,” had seen God (Isaiah 6:5; 2 Nephi 16:5). Then a seraph stepped forward with a live coal taken from the temple altar and placed it on Isaiah’s mouth, saying, “Lo, this hath touched thy lips; and thine iniquity is taken away, and thy sin purged” (Isaiah 6:7; 2 Nephi 16:7). Having his lips cleansed, Isaiah was then able to speak with confidence and to witness and even participate in the proceedings of the divine council (Isaiah 6:8–13; 2 Nephi 16:8–13).

Israeli scholar Nissim Amzallag explained, “This plot clearly reveals that the seraphim … serve as gatekeepers who control access to the divine council” and function as “guardian[s] of the divine council and, by extension, of the divine palace.”17 It also illustrates their role as messengers and intermediaries, as Izaak J. de Hulster, a scholar of biblical symbolism, noted: “The seraphs also help commission an important person to a task … [and] participate in the in the communication of God’s word to a prophet.” Thus, “the seraphs of Isaiah 6 might be understood as carrying out an intermediary role as a type of divine messenger.”18

Moreover, Latter-day Saint scholar LeGrand Davies argued that the verbal root from which the term seraph derives is primarily used to refer to the “cleansing, purifying or refining of ritual objects, people, cities, etc.”19 Thus, according to Davies, both the “fiery serpents” in Numbers 21 and the seraphim of Isaiah 6 should be seen as agents of complete purification: “The seraphim acted as the agents of the ‘cleansing fire’ to Isaiah, as the ‘cleansing’ or ‘fiery serpents’ of the wilderness acted on the Israelites.”20 Trevor Cochell agreed, explaining:

Thus, the coal taken from the altar had what one scholar called “an atoning and purifying effect.”22 Another scholar said that the seraphim “are agents of divine redemption and healing.”23

All these functions add clarity to why the seraphim are mentioned so prominently in Isaiah’s personal account of his calling as prophet. Other aspects of the seraphim may also hold further symbolic meanings. Latter-day Saint scholars have suggested that symbolically the seraphim’s wings are like those of the creatures in Revelation 4:7, which Joseph Smith said are “a representation of power, to move, to act, etc.” (D&C 77:4).24 Likewise, the seraphim’s fiery, burning appearance is often symbolically linked to the glorious nature of these heavenly beings and their celestial abode.25

These powerful symbolic associations not only help readers understand why attendants of the heavenly throne would be described or symbolically represented as “fiery serpents” but also illustrate ways in which the seraphim ultimately typify Jesus Christ. He Himself was symbolized by the brazen serpent—referred to as a seraph in Numbers 21:8 (compare John 3:14–15; Helaman 8:13–15).26 Jesus Christ is the Holy One who stands as keeper of the gate (2 Nephi 9:41). He is our intermediary with the Father (2 Nephi 2:9, 28). And most importantly, it is only through His atoning sacrifice that all can be forgiven, cleansed, purified, and enabled to enter into the presence of the Father (Mosiah 3:18; 4:2). Thus, like all of God’s messengers, both mortal or divine, the seraphim ultimately represent Jesus Christ. All this symbolism adds vivid meaning to the truthfulness of Isaiah’s messianic witness.