Why Were Particular Plagues Sent against Egypt? 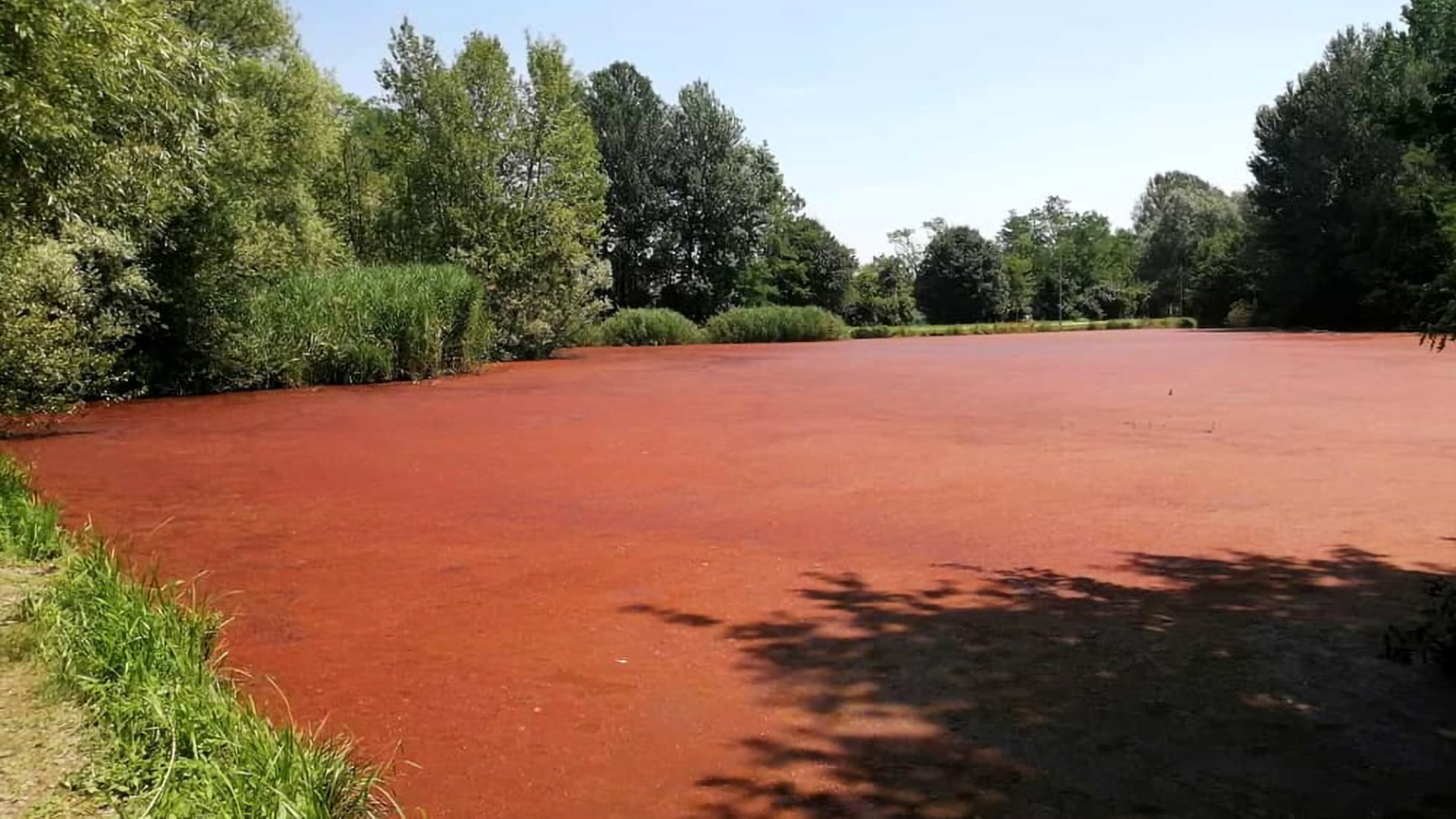 A red algae bloom in the wetlands of Parco delle Cave. Image via Milano Today.
“And I will … multiply my signs and my wonders in the land of Egypt. … And the Egyptians shall know that I am the Lord, when I stretch forth mine hand upon Egypt.”

The book of Exodus records a dramatic showdown between Pharaoh, who claimed to be a god and to have the support of the Egyptian gods, and the Lord, through his representatives Moses and Aaron. As Pharaoh defies the Lord’s demand to release the enslaved Israelites, a series of ten plagues is brought down upon Egypt to compel Pharaoh’s hand and demonstrate the Lord’s superior status as the true God (Exodus 7–12).

Celebrated for generations by Jews across the world during Passover, the account has taken on epic proportions and has been popularly memorialized in movie and song. Naturally, it has also attracted considerable attention from biblical scholars and Egyptologists as they have sought to better understand the significance of both the plagues as a whole and each plague individually. In recent years, scholars have increasingly emphasized how understanding ancient Egypt—its physical environment, its religion, and its royal ideology—clarifies why specific plagues were used by the Lord.

For example, academic studies of the seasonal cycles and natural phenomena of Egypt have found that the individual plagues and their order of occurrence can be tied the annual inundation of the Nile.1 In years of extremely high flooding, due to high rains at the source waters of a major Nile tributary in Ethiopia, algae-rich soil turns the waters blood-red, giving off a putrid smell, killing the fish, and making the waters undrinkable (compare Exodus 7:15–25). This sets off a chain reaction that leads to frogs fleeing the marshy banks for dry land and culminates in both humans and animals alike suffering from serious skin infections, thus accounting for plagues 2–6 (see table).

These events would have played out over the course of several months, beginning in July or August when the Nile flooding occurs and culminating around January. The next three plagues—the hailstorm, the swarms of locusts, and the thick darkness which could be “felt”—are all linked to seasonal winds occurring from February to April. Thus, the whole sequence would have culminated in the spring, corresponding to the timing of Passover.

This does not mean that the plagues were not divine “signs and wonders,” as the biblical account refers to them (Exodus 7:2). The Book of Mormon also refers to these types of divine punishments and destructions as “pestilences” (see Helaman 10:6). The Lord, on needed occasions, has used—and intensified—these natural phenomena in order to bring about divine justice and judgments. Doing so in Egypt conveyed to Pharaoh that each plague was no idle threat from Moses or the Lord—it was a real possible risk that he would have understood. This meant the pharaoh had no excuse for ignoring or dismissing the announcement of each new plague as fanciful or unlikely.

Using these phenomena also cut to the heart of Egyptian beliefs about their gods and kings. In Egyptian religion and ideology, it was the gods of Egypt—embodied by the Pharaoh as their living representative—who were supposed to control these processes and guarantee the natural order.2 As some biblical scholars have argued, individual plagues can be related to the responsibilities of specific Egyptian deities (see table)—and thus showed that it was the Lord, not the Egyptian gods, who actually wielded control over that aspect of the natural world (cf. Exodus 12:12; Numbers 33:4).3

Likewise, the Pharaoh, as divine king and representative of the gods, was believed to ultimately be in control of the natural world (cf. Exodus 6:1).4 It was the Pharaoh who was supposed to control the flooding of the Nile, and when the river was the color of blood, it was taken to be a sign of a weak king.5 For the ninth plague, “there was a thick darkness in all the land of Egypt” (Exodus 10:22). According to Latter-day Saint Egyptologist Kerry Muhlestein:

The darkening of the sun may be the most direct attack against Pharaoh’s ability to fulfill his royal duties in the face of Jehovah’s power. … The king was seen as being directly responsible for Egypt receiving sunlight or for illuminating the two lands. … The presence of the sun was a mainstay of Egyptian theological stability and royal ideology. Thus, Jehovah’s power over the sun was monumental. It was incontrovertible evidence that the king had been bested.6

Understanding the ancient Egyptian context not only explains the specific plagues and their sequence, but also their cumulative effect, which was to throw the natural order into total chaos. Muhlestein explained:

Contaminated water, too many frogs, various insect infestations, disease among humans and animals, storms, loss of crops, the sun being darkened, and loss of human life are all elements of disorder that touch on every aspect of Egyptian life. These calamities as individual catastrophes were just the sort of thing that the king was supposed to prevent, but their arrival in an unrelenting sequence could be seen as nothing short of chaos triumphing over order.7

The pharaoh was, first and foremost, supposed to maintain order and prevent chaos. Thus, as John Currid concluded, “The plagues were an overwhelming assault on Pharaoh and his status as a god in Egypt. … Ultimately, the principal aim of the plagues was the glorification of Yahweh and the recognition of his sovereignty over all.”8 Similarly, Nahum Sarna explained, “The pharaoh was a self-proclaimed god, the object of worship by his subjects. … Consequently, the plagues, the ignoble defeat, and the ignominious end of the god-king constitute a saga that breathes contempt for Egyptian paganism.”9

Nothing could have more effectively and clearly conveyed to the Egyptians (see Exodus 7:5) that the Lord—and not the Pharaoh or their gods—was in control of the natural world than throwing into chaos the annual cycle that normally brought life and prosperity to Egypt, and instead using it to bring devastation and destruction.

As Muhlestein has pointed out, part of the irony of the story is that the pharaoh did have the power to make the chaos stop—all he had to do was agree to let Israel go and let God prevail. “Yet in his arrogance, Pharaoh refused to comply with Jehovah’s request, and thus Pharaoh created the scenario that highlighted his impotence before God. This ultimately created chaos, the antithesis of everything Pharaoh was supposed to create but was powerless to do so when in conflict with the desires and decrees of Jehovah.”10

Today, many may find that when they resist God’s will for them in their life, it similarly may lead to chaos, albeit on a smaller scale. Instead of being like Pharaoh, “We can choose to let God prevail in our lives,” and, “We can choose to let God be the most powerful influence in our lives.” If we do so, President Russell M. Nelson has promised “you will experience for yourselves that our God is ‘a God of miracles.’”11

Kerry Muhlestein, “‘What I Will Do to Pharaoh’: The Plagues Viewed as a Divine Confrontation with Pharaoh,” in From Creation to Sinai: The Old Testament through the Lens of the Restoration, ed. Daniel L. Belnap and Aaron P. Schade (Salt Lake City: Deseret Book; Provo, UT: Religious Studies Center, Brigham Young University, 2021), 448–482.

Egyptian Perspectives on the Plagues of Egypt12