Why Were the Saints Driven from Missouri in the Fall of 1838? 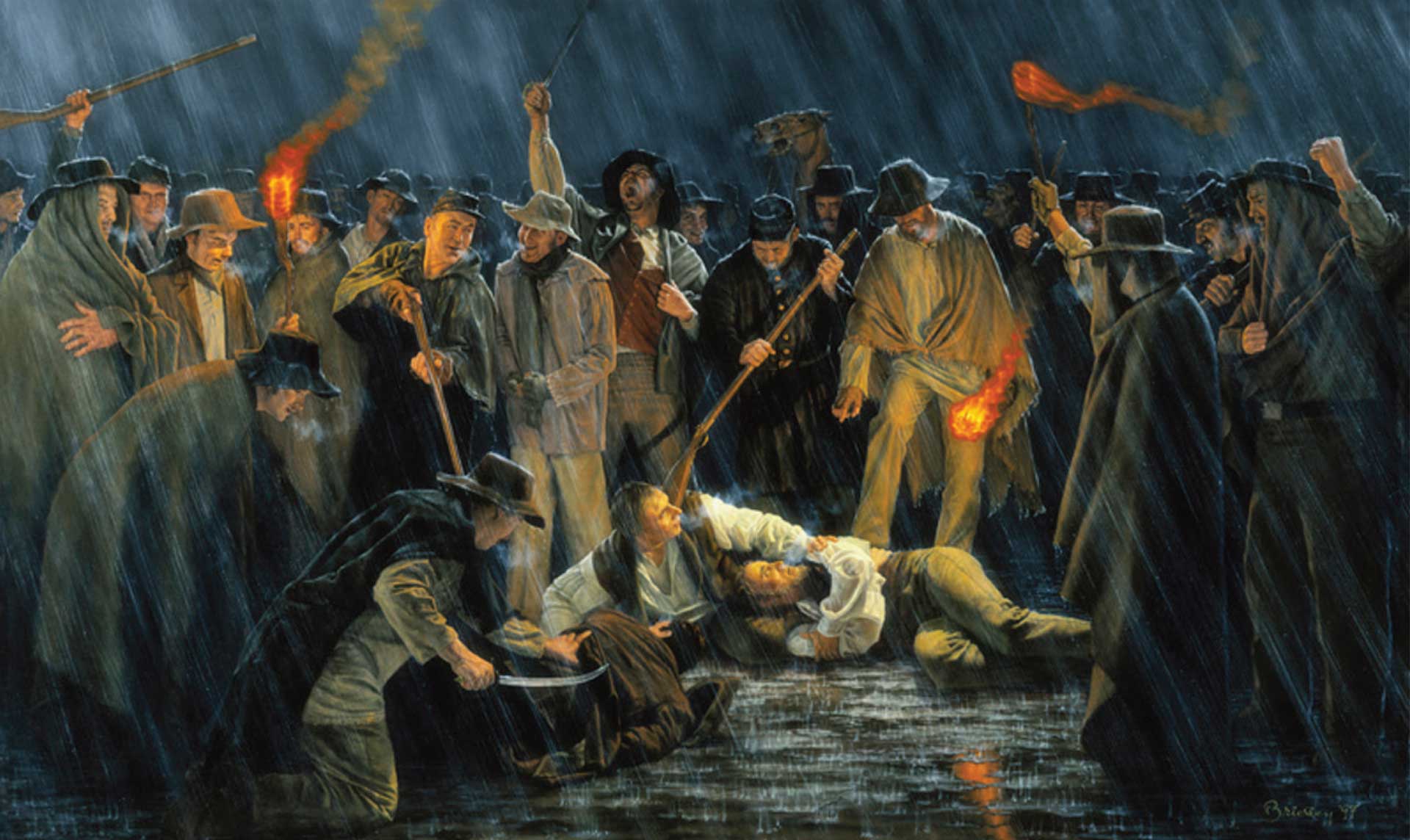 Cold Missouri Night by Joseph Brickey
“Remember thy suffering saints, O our God; and thy servants will rejoice in thy name forever.”

Early members of The Church of Jesus Christ of Latter-day Saints first began settling in Missouri in the summer of 1831, after Joseph Smith received the revelation that the future city of Zion was to be built in Jackson County.1 Over the next eight years, the number of Saints in the area constantly grew as more and more Saints sought to settle near Zion. The Saints’ relationship with neighbors not of their faith was tumultuous and rocky during that time, with hostilities reaching a breaking point in the fall of 1838. The governor issued an extermination order authorizing the militia to drive the Saints from the state at gunpoint. Joseph Smith and many other prominent Church members were arrested on trumped up and, in some cases, outright false charges.2

The circumstances that contributed to these events are complicated and multifaceted. They include “the uniqueness of Mormons’ faith, … their apparent disposition for allying with the Indians, their overall antislavery stance, and their rapidly growing political power and resulting voting blocs,” all of which were red flags for their neighbors.3 Legal historian Jeffrey N. Walker, however, argues that the timing of arrests and driving out of the Saints strongly suggests that one of the main driving factors was the greed of some leading Missourians who coveted the land settled by the Saints and wanted to prevent them from becoming property owners in Missouri.4

The Saints were violently driven out of Jackson County in 1833 and temporarily found refuge in nearby Clay County as they sought for legal redress. Eventually through the instrumentality of lawyer Alexander Doniphan, two new counties were formed in northern Missouri: Caldwell and Daviess. The northern part of Caldwell was informally designated for the Saints to settle.5

Around the time the Missouri Saints began settling Caldwell County, the Saints in Kirtland, Ohio, were also being driven from their homes, and many of them sought refuge in Missouri.6 Most of them arrived destitute, having used all their means to pay the Church’s building and financial debts before leaving Kirtland.7 Lacking means to purchase land in Caldwell County, many of the Saints instead opted to settle to the north of Caldwell in Daviess County, where much of the land had yet to be formally surveyed and made available for final purchase.8 Under the 1830s federal land sales law, so-called squatters on unsurveyed land could obtain formal “pre-emption rights” to land they had inhabited and improved. This meant that after the land was officially surveyed and mapped, squatters would have the right to purchase that land from the federal government before it was made publicly available to anyone else.9

The law allowed impoverished Saints to secure preemption rights to their property without having to pay until the township plat surveys were completed. Because of the backlog on these surveys, new settlers anticipated working their land and generating the income necessary to purchase the property (at $1.25 per acre).10

Several things had to happen before these lands would be open for sale. First, the official sale date of public lands had to be established, and the public had to be given notice. Then, the lands needed to be formally surveyed, and the public had to be notified that they survey was complete. If the survey was not performed in time for the public to receive sufficient notice before the sale, the date of the sale would be postponed. Finally, beginning on the first day of public sale, those with preemption rights would have a two-week statutory period in which they had to arrive in person at the local land records office to purchase their land.11

In the case of Daviess County in 1838, the public was notified in August that the sale date for public lands was set for November 12. The surveys were conducted in September, and public notice was sent out on October 21, 1838.12 It was right about that time that anti-Mormons in Missouri sprang into action. According to Sidney Rigdon, an anti-Mormon minister named Sashel Woods “called the mob together,” explaining that “the land sales (he said) were coming on, and if they could get the Mormons driven out, they could get all the lands entitled to pre-emptions.”13

Governor Lilburn W. Boggs issued the extermination order on October 27, 1838—less than a week after notice was given that the lands had been officially surveyed. Walker reported, “By November 1, 1838, massive numbers of troops forced a Mormon surrender at Far West. … Mormon travel throughout the northern counties was restricted from that point forward.”14 General John B. Clark then arrested more than fifty Latter-day Saints, including not only Joseph Smith and other prominent Church leaders, but also “the most prominent landowners in Daviess County.”15

Those who were arrested were held in custody or prison without due process until a “court of inquiry” could be held, which was postponed until November 12—the very day the sale of public lands began. The legal proceedings continued until November 29, thus allowing the two-week statutory period to elapse, after which more than half of the men held were simply released and several more were able to get out on bail. Only Joseph Smith and a few other key leaders were further held in Liberty Jail on the charge of treason, despite legal analysis revealing no valid grounds for such a charge.16

By the time any of the detained Saints were released, it was too late for them to finalize their legal claim to their lands. “Once the time for the holders of preemptions rights to exercise them had elapsed,” noted Walker, “the key actors in the preceding months’ anti-Mormon activities immediately purchased nearly eighteen thousand acres of Daviess County land,” most of which “previously had been settled and improved by Latter-day Saint occupants.”17

Among those capitalizing on the Saints’ losses were Sashel Woods and some of his family and associates. But they were not the only ones. “Other prominent figures in the Mormon War acquired significant property holdings in Daviess County. … Most of these individuals had not been residents of Daviess County prior to the land sales, indicating they were speculators who profited from the Mormons’ misfortune.”18

While there were certainly many complex factors that contributed to the difficulties Latter-day Saints had with their neighbors in Missouri, it is hard to argue with these orchestrated results. “It is an undisputable fact,” Walker concluded, “that key Missourians involved in the Mormon expulsion immediately seized a financial reward.”19 The timing strongly suggests that this was an intended result of the expulsion. Parley P. Pratt observed:

The Anti-Mormons were determined the Mormons should yield and abandon the country. Moreover the land sales were approaching, and it was expedient that they should be driven out before they could establish their rights of pre-emption. In this way their valuable improvements—the fruit of diligence and enterprise—would pass into the hands of men who would have the pleasure of enjoying without the toil of earning.20

The Saints had arrived in Missouri as citizens of the United States, where federal lands (bought by the United States in the 1803 Louisiana Purchase) were being offered to the public. They were seeking to build a Zion society—a place where the people of God could find peace on earth and have all things in common. Instead, they endured violent persecution and were driven out, in large part, to satisfy the political fears and financial greed of their neighbors. As Walker explained, “While popular history has painted the persecution as religiously motivated, the facts suggest a more base reason: greed, in its most ugly and insatiable form.”21 Prevented from acquiring permanent legal property rights, the Saints could much more easily be driven beyond the boundaries of the state of Missouri.

Recognizing the unbridled greed that played a motivating factor in the expulsion of the Saints from Missouri provides a tragic lesson in the atrocities and sufferings that can be enacted by those who are driven by an unrestrained desire to get gain. Public emotions can be whipped into a frenzy, and legitimate ideologies can be mobilized and catalyzed to serve personal or partisan ends. All people, on all sides of social and civil tensions, can learn lessons of civility and community well-being from close historical studies of cases such as this.