Book of Mormon Central / KnoWhys
Why Were Lehi and Nephi Guided by Angelic Escorts in Their Visions? 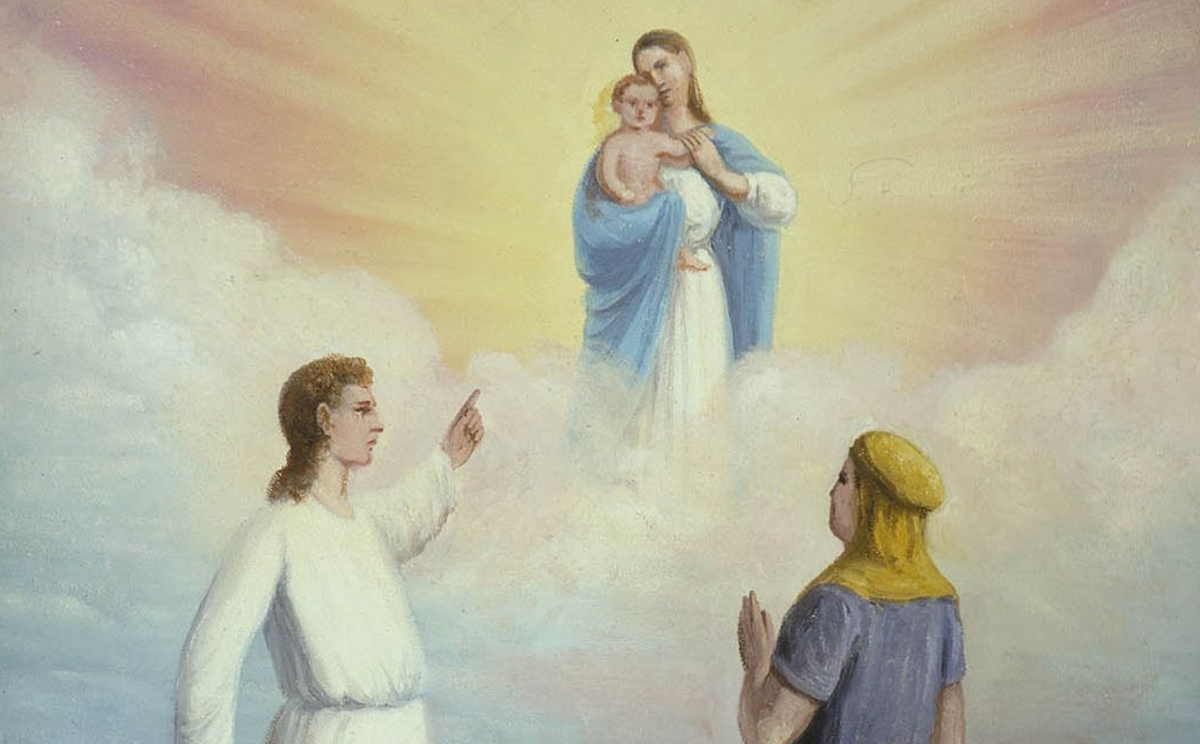 "Nephi’s Vision of the Virgin and the Son of God" by C. C. A. Christensen, via history.lds.org.
“I beheld that he was in the form of a man; yet nevertheless, I knew that it was the Spirit of the Lord; and he spake unto me as a man speaketh with another.”

Lehi and his son Nephi both experienced profound visions in the opening chapters of the Book of Mormon (1 Nephi 8, 11–14).1 A characteristic of both visions was that Lehi and Nephi were guided by angelic escorts during these experiences. Lehi opened the account of his vision by describing “a man . . . dressed in a white robe” who came and “stood before” him (1 Nephi 8:5). This man “spake unto” Lehi and “bade [Lehi] follow him” (v. 6). Lehi obligingly “followed him,” and quickly discovered that he had been led into “a dark and dreary waste” (v. 7). After this Lehi prayed to the Lord for deliverance and was answered with his famous vision of the tree of life.

As in Lehi’s dream, Nephi’s vision began with him encountering a heavenly personage, this time identified as “the Spirit of the Lord,” who transported Nephi to “an exceedingly high mountain” (1 Nephi 11:1). While asking Nephi a series of questions about Nephi’s knowledge of the Plan of Salvation, the Spirit of the Lord granted Nephi a vision of the life, ministry, and Atonement of the Lamb of God, the apostasy and restoration of Israel, and the end days. During this revelatory experience, Nephi “beheld that [the Spirit of the Lord] was in the form of a man” and that this personage “spake unto [Nephi] as a man speaketh with another” (v. 11).2

While the heavenly personage is identified in Nephi’s vision as “the Spirit of the Lord,” questions have been raised as to whether this refers to the Holy Ghost (the third member of the Godhead) or to the premortal spirit of Jesus Christ (Ether 3:16–17).3 Although arguments could be made for either interpretation, most commentators have favored the former.4 It would seem that what Nephi was seeing was so crucial, so fundamentally important in guiding the overarching theological message of the Book of Mormon, that the personage of the Holy Ghost himself appeared to Nephi and guided him on the right interpretive path.5 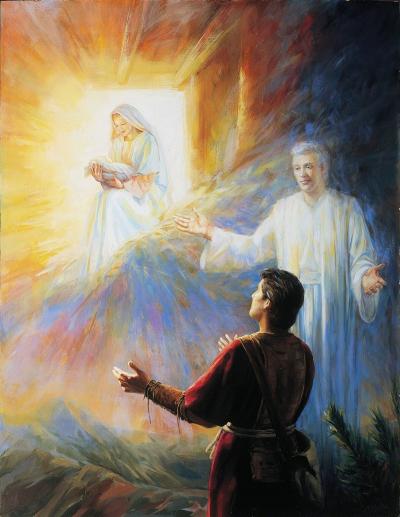 "Nephi's Vision of the Virgin Mary" by Judith A. Mehr

Whatever the case, the Spirit of the Lord soon departed from Nephi and was replaced by an unnamed “angel” who continued the vision (1 Nephi 11:12–14).6 This angel, also called the “angel of the Lord” (1 Nephi 11:34–36; 13:24, 34; 14:29), accompanied Nephi for the remainder of his vision, directing his attention towards crucial historical scenes and asking questions to draw out Nephi’s understanding of what he was viewing.7 At the end of the account of his vision, Nephi informed his readers that the angel was with him at every step, ensuring Nephi mentally perceived and spiritually internalized what he was seeing. “I bear record that I saw the things which my father saw,” Nephi testified, “and the angel of the Lord did make them known unto me” (1 Nephi 14:29).

Lehi’s dream and Nephi’s vision can rightly be classified under the scriptural and extra-canonical genre of “apocalypse.”8 The word apocalypse derives from the Greek apokalypsis, which means literally “unveiling” or “revelation.” An apocalyptic vision is a revelation which typically discloses or reveals secrets about the future of the world, the redemption of God’s people, and the terrible fate of worldly and otherworldly powers which oppose God. The classic example of an apocalyptic text is the book of Revelation in the New Testament, which gets its name from its opening lines: “The Revelation [Greek: apokalypsis] of Jesus Christ, which God gave unto him, to shew unto his servants things which must shortly come to pass; and he sent and signified it by his angel unto his servant John” (Revelation 1:1). The Old Testament book of Daniel is another text with strong apocalyptic themes (e.g. Daniel 7–12),9 and indeed, biblical scholars are convinced that New Testament and early Christian apocalypticism drew much of its inspiration from older Israelite and Jewish sources.10

One feature common to apocalypses, both Jewish and Christian, is the presence of a heavenly being who guides the recipient of a revelation through a visionary experience and interprets or clarifies what is being revealed.11 “In [apocalyptic texts], a human prophet sees a highly symbolic and complex vision that, in many cases, draws on elaborate mythological imagery. The nature of the vision is such that the prophet is incapable of understanding its meaning apart from interpretation by a heavenly being.”12 Thus, angelic escorts appear in the visions of Lehi, Nephi, and their contemporaries because in those days the subjects of these revelations were not already familiar and self-evidently recognized even by the prophet, as they are understood more readily today. 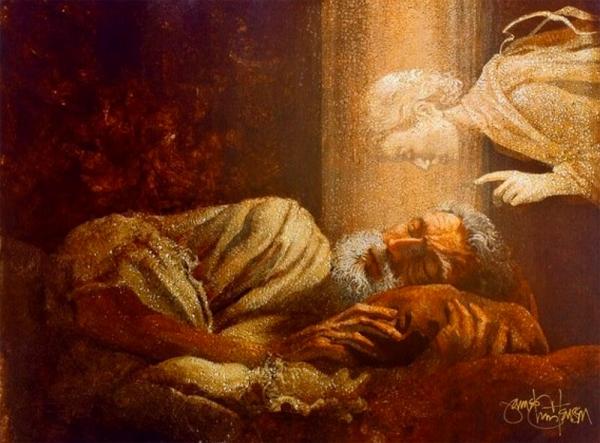 The role of the angelic escort is unmistakably the case in the Bible with Daniel, who was guided through his visions by angelic messengers (Daniel 8:15–16; 9:20–22; 10:10–14). In the book of Revelation, John the Revelator was shown a vision which was “sent and signified” by God through “his angel” (Revelation 1:1), and thereafter John witnessed seven angels each herald cataclysmic events at the end of days by sounding a loud trumpet (Revelation 8–11).13 Outside of the Bible, in extra-canonical texts, apocalyptic visions attributed to figures such as Enoch and Abraham likewise feature the prophet being met by a heavenly being who guides them through their journeys.14

Thus, angels or heavenly guides are a common element in apocalyptic visions, especially in intertestamental Jewish texts. There “the form of the apocalypses involves a narrative framework that describes the manner of revelation,” which may involve “visions and otherworldly journeys, supplemented by discourse or dialogue and occasionally by a heavenly book.”15 Such discourse and dialogue between the prophet and his angelic guide is precisely what readers encounter in the early visions of Lehi and Nephi, along with the heavenly book motif, reinforcing the appropriateness of classifying their visions as apocalyptic.16 These elements are found in ancient prophetic literature in all of these cases because their presence helped audiences in those days to understand and accept the messages being conveyed.

Besides situating them in their ancient cultural and religious contexts,17 reading the visions of Lehi and Nephi in their ancient apocalyptic literary setting helps modern readers better understand and apply the eternal truths revealed to these two great revelators. If, for instance, Nephi’s vision is read as an apocalypse in the scriptural sense, then there’s no surprise as to why he, like John some six centuries later, would be shown things “concerning the end of the world” (1 Nephi 14:21–30), including most crucially the restoration of the gospel and the redemption of scattered Israel. Both Nephi and John, as with other apocalyptic prophets and writers, were tasked to act as prophetic voices of warning. They bore “tandem testimonies of what God would do in the last days.”18

On a more individual level, recognizing the visions of Lehi and Nephi as apocalypses invites modern readers to orient themselves personally into the grand historical and symbolic scheme revealed in these passages. As Elder Boyd K. Packer taught, “You may think that Lehi’s dream or vision has no special meaning for you, but it does. You are in it; all of us are in it.”19 Just as the heavenly messengers guided them through the visions which reveal and clarify plain and precious truths, Lehi and Nephi become escorts who beckon their latter-day readers to “press forward through the mists of darkness” until they reach the tree of life and partake of its exquisite white fruit (1 Nephi 8:11, 24). 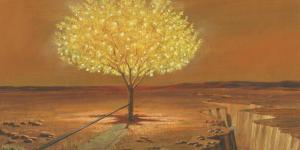 Why Are There So Many Similarities between the Dreams of Lehi and Joseph Smith, Sr.?
October 9, 2018