Why Hasn’t Lehi’s DNA Been Found? 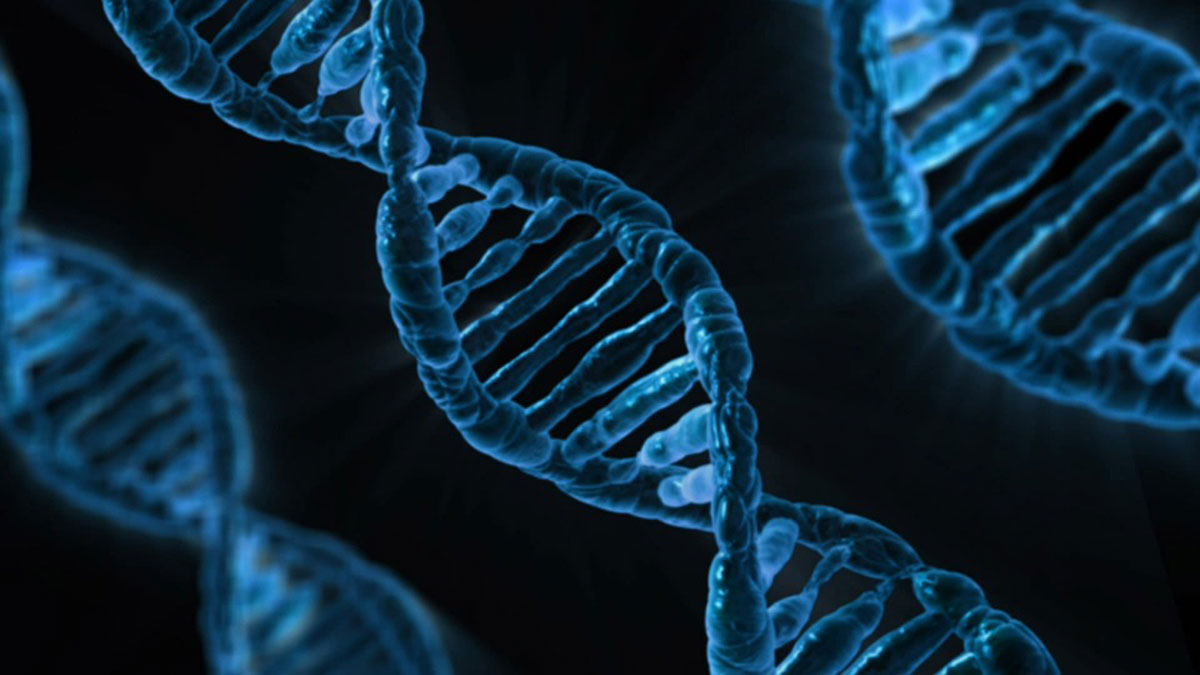 DNA via pixabay.com
“After thousands of years, all were destroyed except the Lamanites, and they are among the ancestors of the American Indians.”

Introduction, 2013 edition of the Book of Mormon

In recent decades, some people have wondered if DNA might provide any insight into Book of Mormon origins. Among these, some have proclaimed that DNA science definitively disproves the Book of Mormon,1 while others have declared just the opposite, arguing that there is positive DNA evidence supporting the Book of Mormon.2 In 2014, the Church published an essay on LDS.org explaining the most rigorous thinking, current science, and the complicated issues related to testing the Book of Mormon using DNA.3 As explained in that essay, the actual science is more complicated than both of these extreme views have supposed.

To date, genetic studies indicate that Native Americans are most closely related to East Asians,4 while no clear genetic relationship with the Middle East has been established.5 However, the best available DNA data has several limitations,6 making it likely that the migrations mentioned in the Book of Mormon would go unnoticed genetically.7 A key factor is that the Americas were already populated when Book of Mormon peoples first arrived. There is strong evidence that Book of Mormon peoples likely interacted with indigenous peoples almost immediately,8 forever complicating efforts to trace the DNA lineages of Jared, Lehi, Mulek, and their co-travelers.

One important limitation is the simple fact that no one knows what Jared’s, Lehi’s, or Mulek’s DNA actually looked like.9 Simply assuming it looked like DNA from the modern Middle East can be deeply misleading. A common problem in population genetics, known as founder effect, appears when the founders of a population had atypical genetic markers for the region they came from. For instance, an LDS geneticist from Italy found that his paternal genetic marker was more typical of East Asian ancestry. If something similar was the case with the founders of Book of Mormon populations, identifying their descendants using DNA would be impossible.10

Even if Jared’s, Mulek’s, and Lehi’s DNA were typical of the regions of their origins, the reality is that most genetic information from the past does not survive into present populations. Most DNA studies on Native Americans are dependent upon DNA markers which pass from one generation to the next along paternal and maternal lines. Because such markers do not get mixed from one generation to the next, these lineages are easy to trace back several generations. However, in total they only represent 0.01 percent of a person’s DNA.11 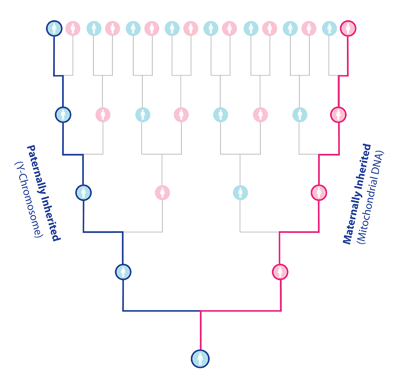 Chart showing how Y-Chromosome and Mitochondrial DNA are only represented by a small portion of a person's ancestry. Image by Book of Mormon Central.

Since these DNA markers only follow the maternal and paternal lineages, they leave out a lot about a person’s ancestry. For example, if one goes back 10 generations (only a couple hundred years in the past), they will have 1,024 ancestors in the tenth generation. However, the paternal and maternal DNA markers would only be able to detect one (for women) or two (for men) of these ancestors. This remains true even as the number of ancestors grows larger with each successive generation, meaning that the further back in time one goes, the less representative these markers become.12

Naturally, given these numbers, most maternal and paternal genetic signatures disappear from the gene pool over time in a process known as genetic drift. Scientists estimate that every 20 generations, only 2 out of 18 genetic signatures survive.13 According to John M. Butler, a forensic DNA scientist, “the majority of the people living today in Iceland had ancestors living only 150 years ago that could not be detected based on the [patrilineal and matrilineal] DNA … yet the genealogical records exist showing that these people lived and were real ancestors.”14

The other 99.99 percent of a person’s DNA is halved and recombined at every generation, making it difficult to trace its genealogical origins. Even this DNA does not account for all ancestors. Geneticists estimate that the average person has DNA from only 12 percent of their 1,024 ancestors from just a couple hundred years ago, a percentage that gets lower with each generation further back in time.15 Thus, again, genetic evidence becomes less representative of a person’s complete ancestry as one goes further back into the past. 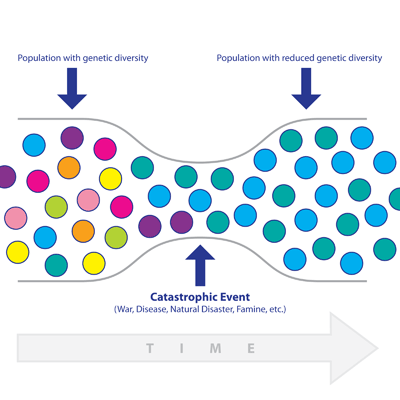 Loss of genetic information is accentuated by what some geneticists call population bottlenecks—outbreaks of warfare, natural disasters, and disease. In addition to the bottlenecks documented in the Book of Mormon (Alma 43–62; 3 Nephi 8–10; Mormon 2–6), the pre-Columbian American population underwent one of the largest bottlenecks in human history after European contact, when perhaps up to 90 percent of the population died off.16

These kinds of limitations led DNA scientist Michael F. Whiting to conclude, “It would be the pinnacle of foolishness to base one’s testimony” of the Book of Mormon “on the results of a DNA analysis.”18 With all the complexities of DNA science in mind, even defenders of the Book of Mormon must be cautious not to claim evidence where none exists.19 As concluded in the essay published by the Church, “DNA studies cannot be used decisively to either affirm or reject the historical authenticity of the Book of Mormon.”20 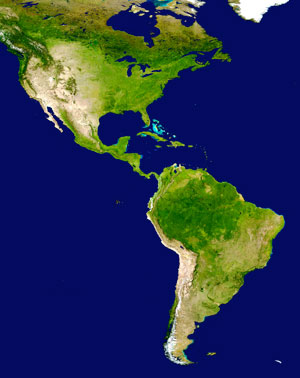 Satellite image of the Americas. Image via Wikimedia Commons

Faithful Latter-day Saints should not be afraid to honestly admit that DNA analysis is inconclusive. The Book of Mormon holds up well under scrutiny and does not need to be propped up by improper use of science. While genetic studies do not offer the evidence some have hoped for, many other disciplines such as archaeology, anthropology, linguistics, geography, geology, literary studies, and ancient legal studies continue to yield fruitful evidence which both supports and sheds light on Book of Mormon narratives.21

Some Latter-day Saints may be interested to know that despite the absence of his genetic signature, it remains likely that Lehi and his sons, living in the Americas 2600 years ago, are common ancestors of all Native Americans living today. According to basic statistical calculation and world population estimates, after going back 2000–3000 years, nearly everyone living then is a common ancestor for nearly everyone living now.22

Latter-day Saints, therefore, need not abandon the long-standing belief—originating with Joseph Smith and carried on by every prophet since—that Lamanites or the children of Lehi can be found all throughout the Americas, although this should be viewed more as a cultural and genealogical construct and not as genetic legacy. Thus, the blessings of Lehi’s seed can and should be extended to native peoples from both North and South America. As stated in the Introduction to the Book of Mormon, Lehi’s family is “among the ancestors of the American Indians.”

“Book of Mormon and DNA Studies,” Gospel Topics, on lds.org.

Jayne E. Ekins and Ugo A. Perego, “Is Decrypting the Genetic Legacy of America’s Indigenous Populations Key to the Historicity of the Book of Mormon?” Interpreter: A Journal of Mormon Scripture 12 (2014): 237–279.