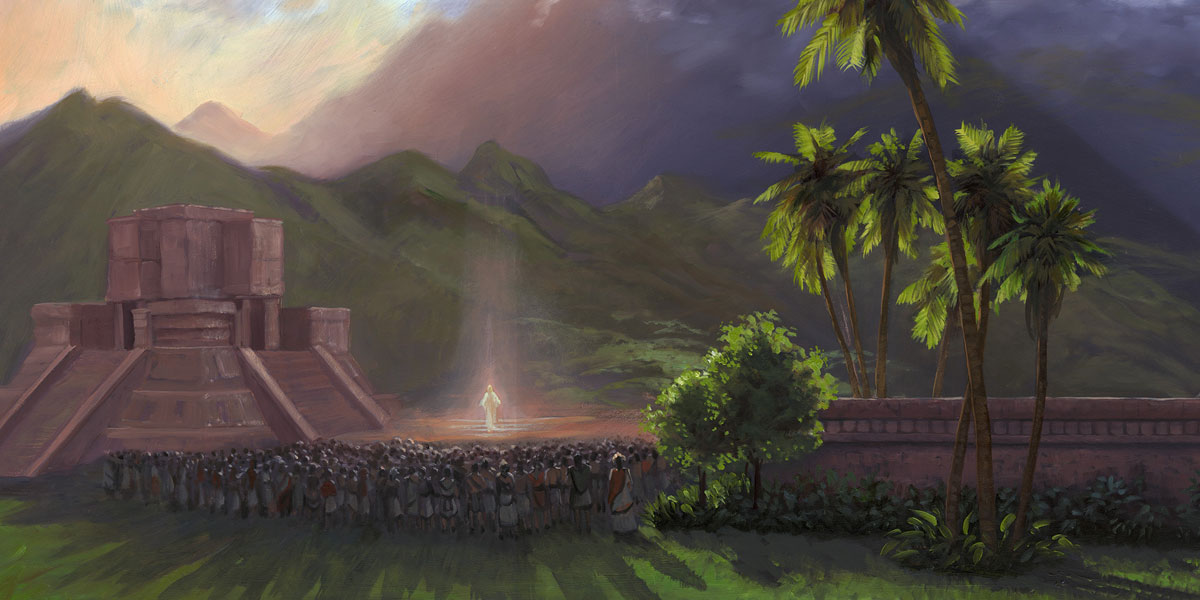 I Am the Light of the World by James Fullmer
"And no tongue can speak, neither can there be written by any man, neither can the hearts of men conceive so great and marvelous things as we both saw and heard Jesus speak."

To his apostles in Jerusalem, Jesus explained “Blessed are the eyes which see the things that ye see: For I tell you, that many prophets and kings have desired to see those things which ye see, and have not seen them; and to hear those things which ye hear, and have not heard them” (Luke 10:24). This teaching underscores the great blessing it was for the New Testament apostles to have been in the physical presence of Jesus Christ. They personally witnessed the miracles of the Savior’s ministry and heard His sermons and teachings from His own mouth.1

Being in the Savior’s immediate presence is a profound blessing and a transformative privilege. Hence, the book of 3 Nephi is a very important and significant book of scripture. In this volume of sacred text, thousands of witnesses saw Jesus Christ, listened to his teachings, and individually felt his resurrected body.2 Those who experienced this great blessing bore record that “no tongue can speak, neither can there be written by any man, neither can the hearts of men conceive so great and marvelous things as we both saw and heard Jesus speak” (3 Nephi 17:17).

Andrew C. Skinner has explained, “In a way, it picks up where Matthew, Mark, Luke, and John leave off and strengthens their messages. Even more significant, Third Nephi emphasizes the most important doctrines, principles, and themes found in the other Gospels.”3 As Jesus declared, “Verily, verily, I say unto you, that this is my doctrine, and whoso buildeth upon this buildeth upon my rock, and the gates of hell shall not prevail against them” (3 Nephi 11:39). 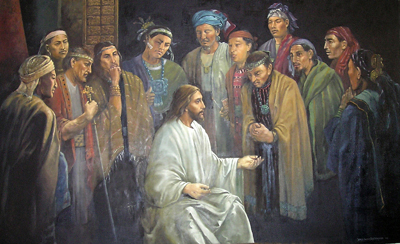 Recognizing that this sacred text offers a unique and unparalleled account of Jesus’ ministry, many scholars and careful students of the Book of Mormon have paid special attention to its narrative, themes, and teachings. Victor L. Ludlow has noted how covenants are thematically central to Christ’s discourse in 3 Nephi.4 Gaye Strathearn and Jacob Moody have proposed that Christ’s application of Isaiah holds special significance for the Book of Mormon itself as a sign for the gathering of Israel.5 Robert L. Millet has emphasized the special importance of Christ’s prayers and how they demonstrate the universal need to “communicate with God—often, regularly, consistently, intensely, reverently.”6

Charles Swift has offered a literary portrait of Jesus as the Divine Lord, remarking that this special account of His ministry allows “us to see more of Jesus as the glorified, resurrected God that he is.”7 Jerry L. Jaccard has proposed that, like music, 3 Nephi holds an “intentional tendency toward beauty, proportion, and order not only in the creation as a whole, but in the scriptural account of it as well.”8

Richard Lloyd Anderson has suggested that Book of Mormon “is a guidebook for our age because it collects foundational doctrines, and these are bound together in the central practice of partaking of the sacrament,” as portrayed in 3 Nephi.9 John W. Welch concluded that Christ’s sermon at the temple in Bountiful “restores covenantal and sacred meaning to the Sermon on the Mount,”10 and that in numerous ways 3 Nephi can be seen as opening to all people the blessings previously afforded only to the High Priest in the Holy of Holies.11 Many more enlightening studies have brought forth an abundance of noteworthy insights.12 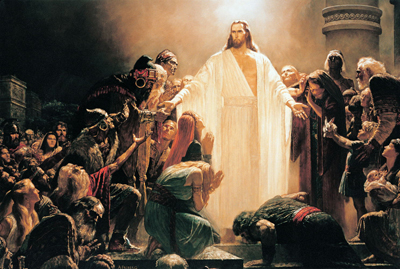 As the crowning jewel of the Book of Mormon, the accounts in 3 Nephi are of greatest worth and value. President Ezra Taft Benson taught that Third Nephi “contains some of the most moving and powerful passages in all scripture” and that it “is a book that should be read and read again.”13 Part of its immediate relevance and worth to modern readers is that the “record of the Nephite history just prior to the Savior’s visit reveals many parallels to our own day”14 and thus serves as a precious “pattern for preparing for the Second Coming.”15

Jewels, such as diamonds, are formed and purified under extraordinary pressures. Concerning Mormon’s editorial approach in selecting and organizing the overall narrative in 3 Nephi, Grant Hardy has noted,

The argument he is setting up seems to equate the signs among the Nephites of Christ’s birth with the sign of the coming forth of the Book of Mormon. [In both cases] these [signs] are preliminary warnings, which will be followed by a brief probationary period and then the destructions accompanying Jesus’ death will have their counterpart in the devastation that will take place at the Second Coming.16

Though terrifying and tremendous, these upheavals herald the dawning of a clearer, brighter, and lustrous day. During the final scenes leading up to the Savior’s visitation at the temple in Bountiful, the “people began to look with great earnestness for the sign which had been given by the prophet Samuel, the Lamanite” (3 Nephi 8:3). In modern times, prophets and apostles have similarly encouraged people to study the signs of the Lord’s coming and to anxiously prepare for His exquisite arrival.

Elder Neil L. Andersen remarked, “The thought of His coming stirs my soul. It will be breathtaking! The scope and grandeur, the vastness and magnificence, will exceed anything mortal eyes have ever seen or experienced.” Elder Andersen further invited, “May we prepare for His coming by rehearsing these glorious events over and over in our own minds.” 17 Christ’s resplendent visitation at the temple in Bountiful can help readers better understand and anticipate what it means for Him to come again. 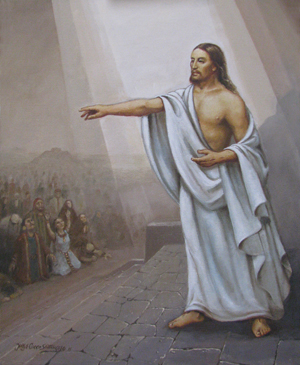 Yet 3 Nephi is far more than a key to discerning the signs of the times. It was written to help individuals, communities, and nations prepare themselves and to be refined, cut, and polished, to enter into the presence of the Lord. Elder Dallin H. Oaks has stated that “the faithful are taught to study the signs of [the Second Coming] and to be prepared for it” (emphasis added).18

3 Nephi, as a spiritual gem and model of purifying preparation, “contains those matters that the Savior himself felt were and are most important to the functioning of his church and absolutely essential for sons and daughters of God to internalize if they want to be exalted.”19 Welch concluded, “The book of 3 Nephi lays forth a holy template for how one may dwell forever in the house of the Lord Jesus Christ, the Son of God and the great and eternal High Priest of all mankind.”20

Thus all those who accept the reality of Jesus Christ’s visitation in 3 Nephi and follow His teachings delivered at the temple in Bountiful will be prepared to enter into His presence when the “curtain of heaven [will] be unfolded” and the beautifully radiant “face of the Lord shall be unveiled” (Doctrine and Covenants 88:95). As Strathearn has described, “While 3 Nephi may not be at the physical center of the Book of Mormon, it clearly serves as its crowning jewel.”21 Similarly, Skinner declared that 3 Nephi is “an anchor to our faith and a crown jewel of inestimable worth in our precious treasury of scripture.”22