Why Does Nephi Use Isaiah 29 as Part of His Own Prophecy? 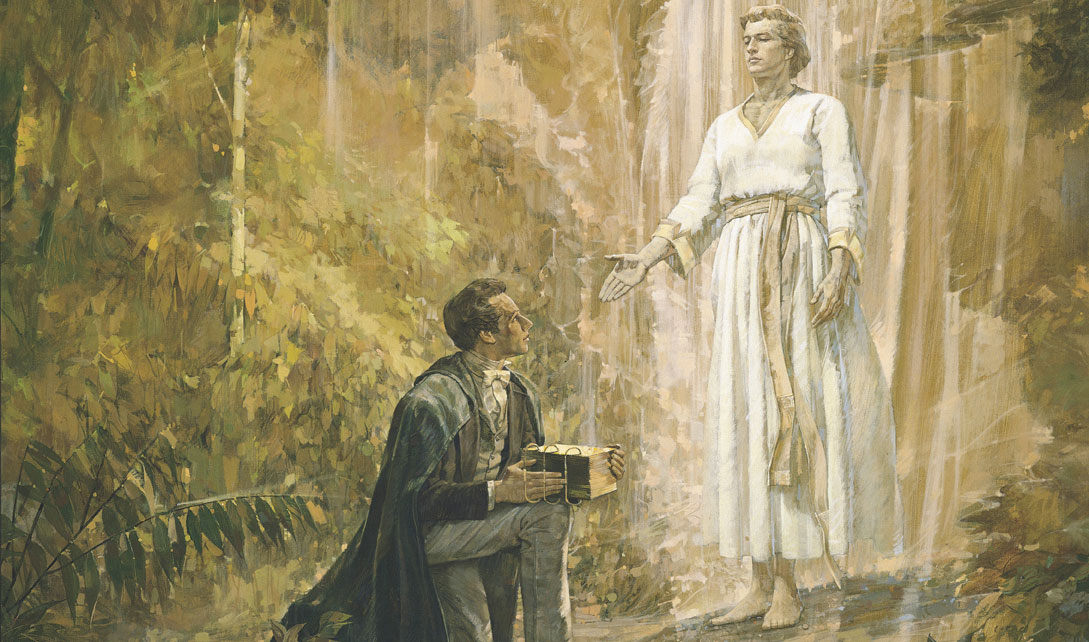 Joseph Smith received the gold plates as prophesied by Nephi. Image via lds.org
“For those who shall be destroyed shall speak unto them out of the ground, and their speech shall be low out of the dust, and their voice shall be as one that hath a familiar spirit”

According to Robert A. Cloward, “In the doctrinal and devotional writings of this dispensation, no chapter of Isaiah is more often cited” than Isaiah 29.1 The precedent was set by the Lord himself in 1820, when he paraphrased Isaiah 29:13 while telling Joseph Smith that none of the churches available at the time were true (see Joseph Smith—History 1:19). Many centuries earlier, however, the prophet Nephi linked Isaiah 29 to this dispensation by using several phrases and sometimes long blocks of text from Isaiah 29 and likening them to Joseph Smith and the restoration.

This has led a number of LDS scholars to the conclusion that Nephi is not actually quoting Isaiah 29 verbatim in 2 Nephi 27. Rather, Nephi is using Isaiah’s verbiage—and expanding on it—to express his own prophecy. “In his ‘own prophecy,’ Nephi uses many words and themes … from other chapters of Isaiah, including words that sound like Isaiah 29,” Cloward observed. “He attributes none of these to Isaiah. In fact, he repeatedly claims the words are his own or attributes them to the Lord.”3

Nephi had seen the Restoration and coming forth the Book of Mormon in vision (1 Nephi 13:32–42). When Nephi read about “a book that is sealed,” taken by men to “one that is learned, saying, Read this, I pray thee,” and then subsequently taken to “him that is not learned” (Isaiah 29:11–12), he found apt words to adopt in describing certain events which would unfold in the life of Joseph Smith (2 Nephi 27:15–19).

Isaiah’s description of “speech … whisper[ing] out of the dust” with a “familiar spirit” naturally reminded Nephi that the book he saw would come up out of the ground, carrying a spirit that resonates in the hearts of truth seekers everywhere (Isaiah 29:4; cf. 2 Nephi 26:16). Its powerful message would penetrate the hearts of those who were spiritually “deaf” and “blind” and lead their souls “out of obscurity, and out of darkness” (Isaiah 29:18; cf. 2 Nephi 27:29).

In Isaiah, Cloward explained, the sealed book is symbolic. “No specific book is mentioned” by Isaiah, whose “concern was the lost vision of his people, not books. … Isaiah’s symbolic sealed book is still sealed today.”4 But Nephi’s sealed book is real, and it has come forth in the latter-days.

It was Nephi who made Isaiah’s symbolic book into a literal book. Nephi likened the symbolic book in Isaiah’s simile to a literal, specific record the Lord had commanded him to write on gold plates. Nephi also foretold the latter-day role of his record in restoring vision, understanding, and doctrine to the house of Israel.5

There are both ancient and modern precedents for this kind of practice. Brant A. Gardner has suggested that this is akin to the later Jewish concept of pesher, an interpretive commentary on scripture that was believed to be inspired, attested in the Dead Sea Scrolls and other ancient sources.6 In more contemporary times, when Elder Bruce R. McConkie bore his final testimony, he insisted, “I shall use my own words, though you may think they are the words of scripture.”7

The understanding that Isaiah 29 and 2 Nephi 27 are distinct and separate prophecies has several implications. First, it clarifies the interpretation of Isaiah 29 in context, as a prophecy about the fall and restoration of Jerusalem, specifically.8

Second, instead of assuming that Nephi is giving a more accurate version of Isaiah 29, the expansions and rewordings can be understood as Nephi’s adaptations to what he saw in vision. Nephi recognized Isaiah’s words as suitable for describing his vision, but not necessarily perfect. So, as he adapted Isaiah’s words, he made expansions and emendations as he saw fit to reflect more accurately the future events he witnessed. This also means there is no need to expect more ancient manuscripts of the Isaiah text to confirm any of Nephi’s changes.

Third, if Cloward is correct, this means that it was Nephi’s prophecy, not Isaiah’s, that was fulfilled with Martin Harris’s visit to Charles Anthon and other scholars.9 The attribution of these events as a fulfillment of Isaiah 29 began with Joseph Smith and Martin Harris themselves. However, 2 Nephi 27 was not translated until a year after these events transpired, so it is not surprising that they would apply Isaiah 29 to these events instead.10

Finally, this provides yet another glimpse into the process of “likening.”11 This time, however, Nephi’s likening is different. Instead of direct quoting, followed by application, Nephi is actively applying Isaiah’s words while quoting them by adapting them to his prophetic vision. Furthermore, with the Joseph Smith Translation of Isaiah 29, there is yet another layer of likening, this time from a modern-day prophet.

Specifically regarding the JST Isaiah 29, Cloward noticed, “the Prophet confirmed that KJV Isaiah 29 and 2 Nephi 26–27 are different and independent texts. He consciously used part of each.”12 By doing so, “Joseph Smith chose to give the inspired translation of two-thirds of Isaiah 29 an application more apropos to the latter days. By copying Nephi’s words into the JST from verse 8 to the end, Joseph Smith likened Isaiah 29 to his own dispensation.”13

From Isaiah to Nephi to Joseph Smith, the words of Isaiah 29 have taken on new and relevant meanings for different times and places.14 “In this process, Isaiah’s sealed book was reinterpreted as Nephi’s gold plates and as Joseph Smith’s Book of Mormon. Isaiah’s dust of death was reinterpreted as Nephi’s source of renewed life and as Joseph Smith’s Cumorah. … This is the process of likening. Prophets do it readily. Students of the scriptures are urged to liken as well. … As readers do this, the Lord can reveal new truths to them and enlarge their understanding.”15