Why Does God Sometimes Send Angels to Help People? 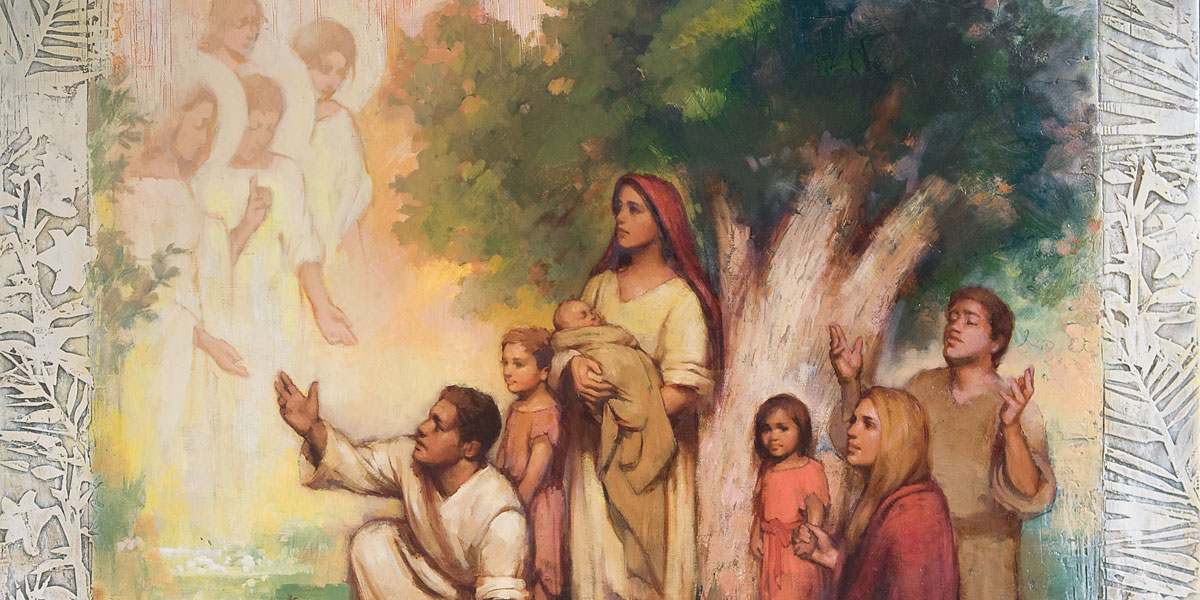 Resurrection Dawn by Annie Henrie Nader
"And the great God has had mercy on us, and made these things known unto us that we might not perish, … because he loveth our souls as well as he loveth our children; therefore, in his mercy he doth visit us by his angels …"

Among the many faith-promoting stories that have come to us from the experiences of the early Mormon pioneers, a particularly popular and inspiring account is that of Francis Webster, a member of the ill-fated Martin Handcart Company. As recorded by William R. Palmer, Webster would later recount the following experience:

I have pulled my hand cart when I was so weak and weary from illness and lack of food that I could hardly put one foot ahead of the other. I have looked ahead and seen a patch of sand or a hill slope and I have said I can go only that far and there I must give up for I cannot pull the load through it. I have gone on to that sand and when I reached it the cart began pushing me. I have looked back many times to see who was pushing my cart but my eyes saw no one. I knew then that the Angels of God were there.1

This story represents one of many accounts of the ministry of angels to the early Saints in this dispensation. Such divine manifestations created a real connection between God’s interaction with mankind in the modern world and ancient traditions regarding heavenly communications found in the Bible and the Book of Mormon.

The ancient record of the Nephites revealed to Joseph Smith contained many accounts of the ministry of angels, and helped to explain why God sends these heavenly messengers. Angels perform several different roles in the Book of Mormon. They came, among other reasons:

Angels appeared to many of the great prophets and missionaries of the Book of Mormon, including Lehi, Nephi, Jacob, King Benjamin, Alma the younger, Samuel the Lamanite, and others. For example, the record states that Nephi, the son of Nephi, grandson of Helaman,2 had such great “faith on the Lord Jesus Christ that angels did minister unto him daily” (3 Nephi 7:18). Also, angels came to the rescue when Nephi and Sam were attacked by Laman and Lemuel (1 Nephi 3:29), when the believers were persecuted by Alma the Younger and the sons of Mosiah (Mosiah 27:13), and when the Lamanites threw the brothers Nephi and Lehi into prison and sought to slay them (Helaman 5:21–48).

Mormon taught that one of the principal reasons for the ministry of angels is so that those who receive their visitation can then bear testimony of their reality and divine message and, therefore, build faith in others. 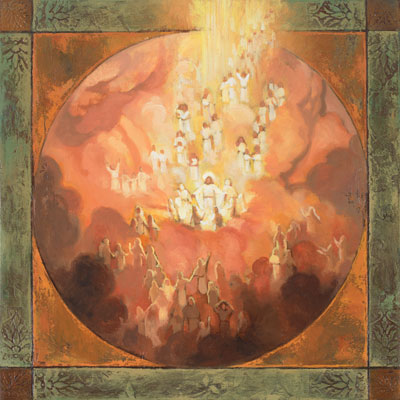 Between Heaven and Earth by Annie Henrie Nader

Mormon declared that God sends angels to “[show] themselves unto them of strong faith and a firm mind in every form of godliness” (Moroni 7:30; cf. Alma 12:20). He further stated that “it is by faith that angels appear and minister unto men” and that “if these things have ceased … it is because of unbelief” (Moroni 7:37). Believers should expect that where strong faith is present, God will send His heavenly ministers to aid His mortal children.

Mormon posited that when the “chosen vessels” of the Lord receive the word of Christ through angelic ministry, they then go forth “that they may bear testimony of him.” “And by so doing, the Lord God prepareth the way that the residue of men may have faith in Christ, that the Holy Ghost may have place in their hearts” (Moroni 7:31–32). Although not everyone receives the visitation of angels, those who have not may gain greater faith and testimony by listening to those whom God has chosen.

Mormon further taught that angels are sent “to fulfil and to do the work of the covenants of the Father, which he hath made unto the children of men” (Moroni 7:31). God is faithful to the covenants He has made with His children, and the visitation of angels demonstrates that faithfulness, as well as His mercy and love (Alma 24:14).

In this dispensation, the ministry of angels to “chosen vessels” such as the prophet Joseph Smith, and many other faithful saints in need of divine help, like Francis Webster, has served as a witness that God is still active in human affairs and that He still sends angels to assist when mortals have faith and great need.

Believers may sometimes wonder, "Why don't angels appear to me?" and mistakenly think that this is due to a lack of faith on their part. They would do well to remember a talk given by President Wilford Woodruff in 1896 in which he recounted many of his own experiences in Church history, including some in which angels ministered to him. He taught that in each of these experiences, he possessed the gift of the Holy Ghost, but in those where angels were manifest it was only because there was a specific purpose and nobody else could do what they were sent forth to do. He taught that the key thing for every Latter-day Saint was to always have the gift of the Holy Ghost and the Lord would see that they were directed right. President Woodruff explained:

“If the Lord sends an angel to anyone, He sends him to perform a work that cannot be performed [except] by the administration of an angel . . .

The Lord had sent angels to men from the creation of the world, at different times, but always with a message or with something to perform that could not be performed without . . .

Now I have always said, and I want to say it to you, that the Holy Ghost is what every Saint of God needs. It is far more important that a man should have that gift than he should have the ministration of an angel, unless it is necessary for an angel to teach him something that he has not been taught.”3