Why Does Alma Mention Three Kinds of Paths in One Verse? 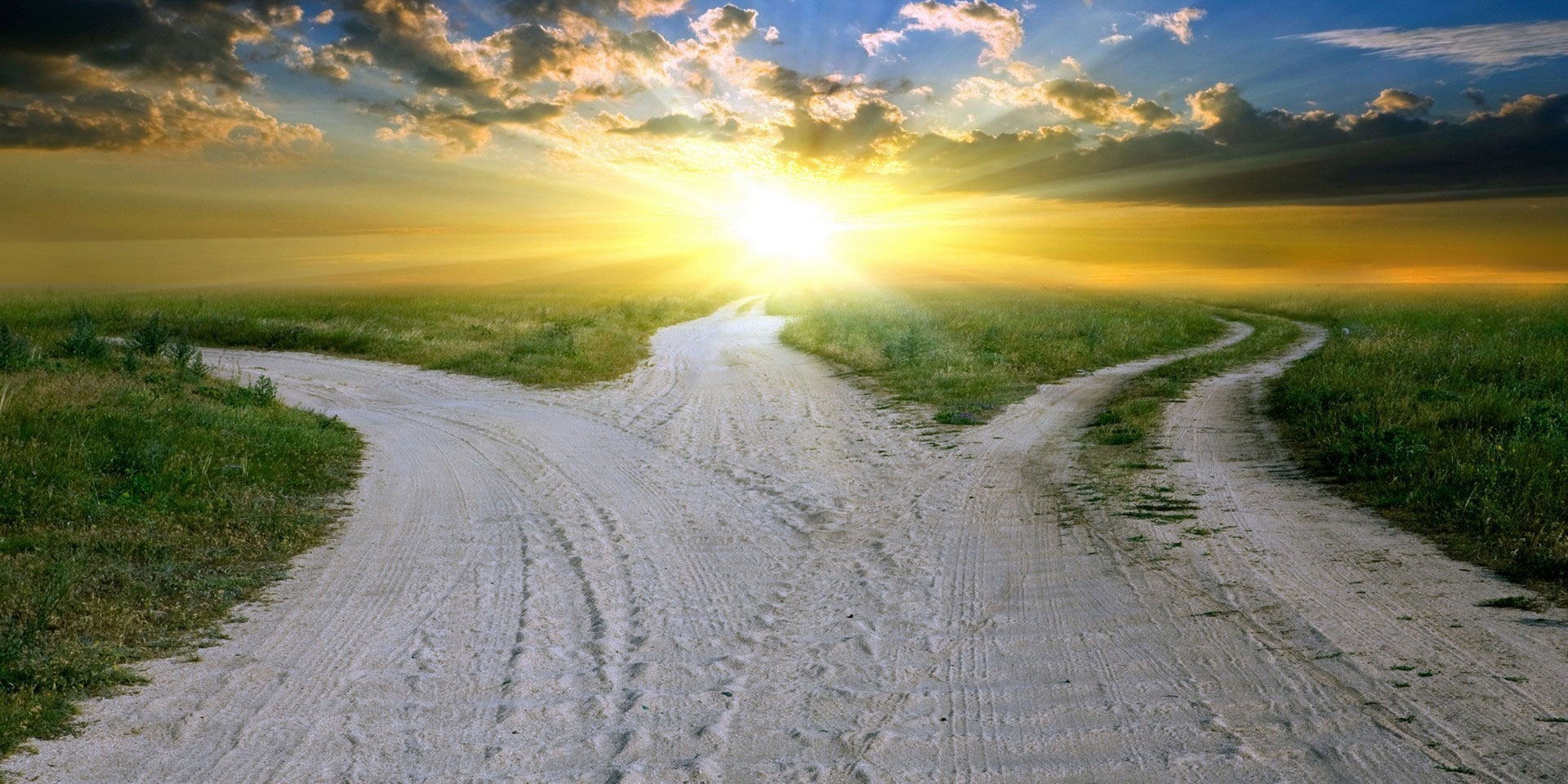 Alma 7 records Alma the Younger’s address to the righteous people of the city of Gideon,1 who were “not in a state of so much unbelief as were [their] brethren” in Zarahemla (Alma 7:6). Because of their state of spiritual readiness, Alma felt that these people could be taught more about the coming of their Redeemer to this world. He said that the Spirit of God had instructed him to “Cry unto this people, saying—Repent ye, repent ye, and [1] prepare the way of the Lord, and [2] walk in his paths, which are straight; for behold, [3] the kingdom of heaven is at hand, and the Son of God cometh upon the face of the earth” (Alma 7:9).2

Fulfilling this three-fold spiritual assignment and expanding upon it with three different images, Alma affirms that he perceives (1) that these people “are in the paths of righteousness,” (2) that they are walking “in the path which leads to the kingdom of God,” and (3) that they are “making [God’s] paths straight” (Alma 7:19).

These three images of the “paths” or “ways” evoke strong biblical precedents and relevant spiritual messages: 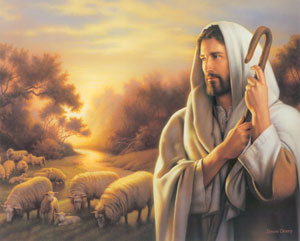 1.  “The Paths of Righteousness”

This phrase in Alma 7:19 is found once in the Bible, in Psalm 23:3. The only other place it appears besides Alma 7:19 and Psalm 23:3 is in 1 Nephi 16:5.3 The unforgettable Psalm 23 praises the Lord as the personal Shepherd who “restoreth my soul and leadeth me in the paths of righteousness for his name’s sake.”

2. “The Path Which Leads to the Kingdom of God”

Although this exact phrase is found nowhere else in scripture, the general imagery is not uncommon. In 2 Nephi 31:9, 17–21, Nephi talks about getting “into this strait and narrow path” (v. 19) and enduring on that path to ensure salvation in the “kingdom of God” (v. 21), a clear allusion back to Lehi’s dream of the Tree of Life and the one strai[gh]t and narrow path that leads to it. 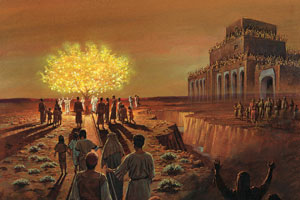 Also, the path that leads to the kingdom of God is likely also a recollection of, or a reference to, the ancient path that led to the temple in Jerusalem. See, for example, Psalm 84:5, the last clause of which refers (in Hebrew) to a highway or a raised, public road. The ESV and ASV Bibles render this as “the highways to Zion” and the NET Bible has “the roads that lead to your temple.” Similarly, Isaiah 35:8–10 refers to a “highway” called “the way of holiness” that will lead the redeemed “to Zion.”4

3. “Ye Are Making His Paths Straight”

The highway to Zion, or to the temple of Jerusalem, was also the path that Jehovah was to take as he came to Jerusalem to save (or after he had saved) his people. The people of the land were expected to build up this path in preparation for his coming. Psalm 68 speaks of the Lord, “him that rideth upon the heavens” (v. 4), coming in glory to save His people (see also vv. 7, 17– 18, 24–25). The Hebrew of Psalm 68:4 tells the people to “lift up” something which is not specified,5 but the ASV renders the phrase as “Cast up a highway for him that rideth through the deserts.” 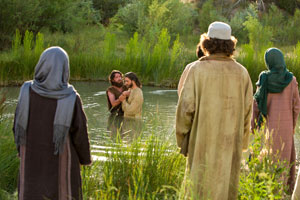 This translation choice may have been made with passages such as Isaiah 62:10 in mind, a passage which describes well the instruction to build up the path of the Lord that the redeemed would travel on to reach Zion. It states: “Go through, go through the gates; prepare ye the way of the people; cast up, cast up the highway; gather out the stones; lift up a standard for the people.” Similarly, Isaiah 57:14–15 speaks of the path that will be prepared for “him that is of a contrite and humble spirit” to come up to the Lord’s dwelling place. The people are admonished, “Cast ye up, cast ye up, prepare the way, take up the stumbling block out of the way of my people.” The path was to be built up, smoothed out, and made straight.

The passage that Alma likely had in mind when he used this phrase in Alma 7:19 (“making his paths straight”) is Isaiah 40:3–4:

The voice of him that crieth in the wilderness, Prepare ye the way of the Lord, make straight in the desert a highway for our God. Every valley shall be exalted, and every mountain and hill shall be made low: and the crooked shall be made straight, and the rough places plain.

This bold prophecy, one which was also known to Lehi and Nephi, who also spoke “concerning a prophet who should come before the Messiah, to prepare the way of the Lord” (see 1 Nephi 10:7; 11:27; 2 Nephi 31:4-18), stands in the same prophetic tradition that Alma draws upon here. 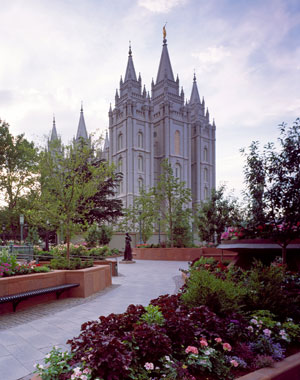 In Alma 7, the Chief Priest Alma delivered words that discharged his three-fold commission to speak openly to the people of Gideon about the way of the Lord, his paths, and the coming of the Son of God. In speaking profoundly and prophetically, Alma alludes to three uses of the word “path” from the Israelite temple tradition found especially in the Psalms and in Isaiah: the Lord’s paths of righteousness that lead to him, the path or sacred way that leads to the temple, and the path that the Lord will use in coming upon the face of the earth.

With the first, one can imagine several reasons why Alma would have alluded on this occasion to the Lord’s paths of righteousness in Psalm 23. Alma knew his audience well; he praised them as humble followers of Christ whose fathers and mothers had allowed themselves to be led out of captivity by Him (Mosiah 22). Indeed, the Lord had led the people of Gideon into a peaceful valley, as the Lord in Psalm 23 leads his people “to lie down in green pastures, . . . beside the still waters” (Psalm 23:2).

Regarding the second, one might well ask why Alma would have wanted the people in the city of Gideon to remember to be “in the path” or on the road that leads to the temple and the kingdom of God. At the time that Alma spoke to the people in Gideon, he had only recently stepped down from being the Chief Judge and was now focusing his efforts solely on his position and authority as the High Priest in the church and temple of God in the land of Zarahemla (Alma 4:17-18). Thus, he commends these people, living in a valley some distance from Zarahemla, for journeying to the holy temple in Zarahemla. 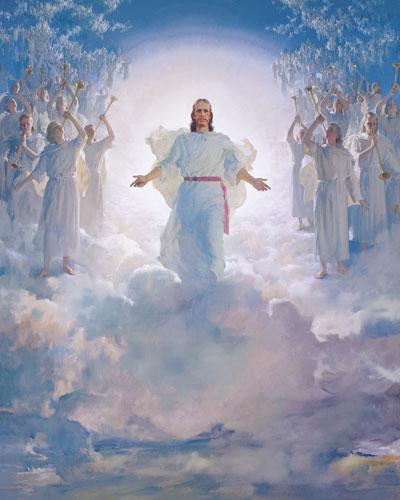 From the third, understanding the commandment to lift up, or build up, the highway that will welcome the coming Messiah helps readers to understand how this imagery could also have influenced Alma on this occasion. It was in Gideon that Alma discharged his assignment to speak of paths that are straight and of the coming of the Son of God on earth, and so it is here that he directly discloses that the Son of God “shall be born of Mary at Jerusalem, which is the land of our forefathers,” and then reveals information about the temptations, death, and atoning sacrifice that Jesus would perform there in the land of Jerusalem (Alma 7:10-13). Just as the prophetic highway led to the temple, Alma then welcomed all the worthy people of Gideon to come unto the Lord, to be baptized, washed, saved, and cleansed, to lay aside every sin and enter into a covenant to keep the commandments. They were expected to hear the words that they “shall have eternal life” (Alma 7:14-16). Alma wanted the people of Gideon to have confidence and faith that they had found that path, were being led by the Good Shepherd, and that they were helping to prepare the way both for the coming of the Lord and for others to follow that path.

The language in Alma 7:9 has many parallels to passages in the Psalms and Isaiah. Just as those passages apply their exhortations and acclamations to all the men and women in Israel, Alma applied each of all of these concepts to the congregation at Gideon as a whole. While it is also true that these prophecies can look forward specifically to the mission of John the Baptist (see 1 Nephi 10:7–8; 11:27; 2 Nephi 31:4–18; and Matthew 3:1–3; 4:14–17), every faithful person has a role to perform in making straight the way of the Lord and preparing the world for his coming. As Alma applied this rich imagery to the good people of Gideon, all readers of the Book of Mormon today can find themselves in these words and evaluate where they are along the path that leads to the Savior, and their progress in helping to make that path straight.