Why Did William E. McLellin Call the Book of Mormon the “Apple of My Eye”? 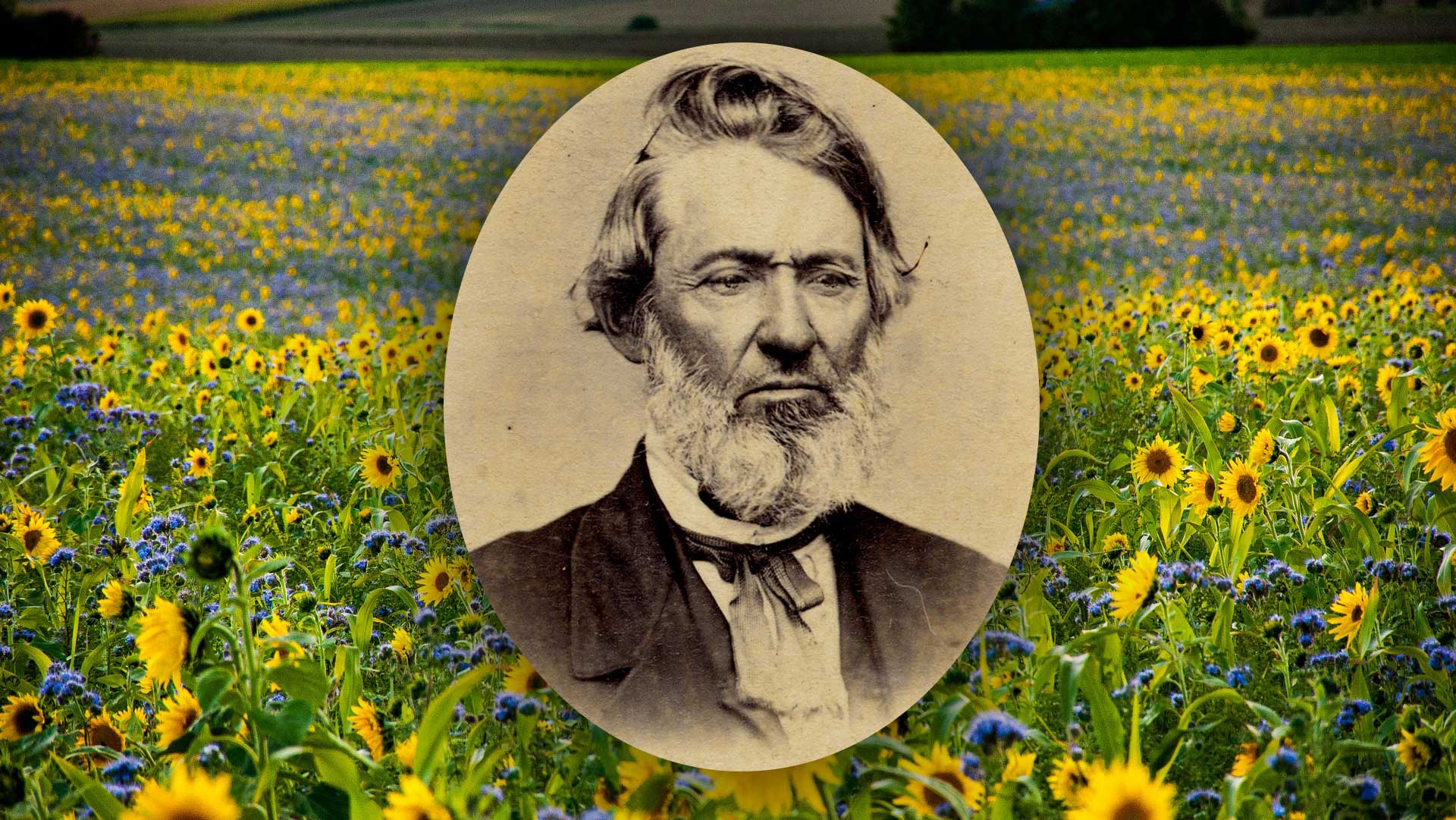 Portrait of William McLellin via The Joseph Smith Papers.
“Behold, thus saith the Lord unto my servant William E. McLellin—Blessed are you, inasmuch as you have turned away from your iniquities, and have received my truths, saith the Lord your Redeemer, the Savior of the world, even of as many as believe on my name.”

William E. McLellin joined the Church in Illinois in the summer of 1831 and was called as one of the original members of the Quorum of the Twelve in 1835. “But McLellin was inconsistent,” Steven C. Harper observed; “his determination wavered.”1 As a result, eventually “he broke with his leaders in the wake of the Kirtland financial difficulties of 1837 and was excommunicated in May 1838.”2

Decades later, anti-Mormon writer James T. Cobb contacted McLellin as part of his efforts to “establish the falsity of the Book of Mormon through an extensive examination of its origins.”3 McLellin probably seemed like someone who would be sympathetic to Cobb’s agenda—after all, not only was he excommunicated but he also “quickly became an active, even irascible, opponent of the church and personally hostile—to the point, apparently, of seeking to do violence—to Joseph Smith.”4 By 1880, when Cobb contacted him, McLellin had also become estranged from the various Restoration splinter groups.5

Yet the response Cobb received likely came as a bit of a shock to him. “When I thoroughly examine a subject and settle my mind,” McLellin explained, “then higher evidence must be introduced before I change. I have set to my seal that the Book of Mormon is a true, divine record and it will require more evidence than I have ever seen to ever shake me relative to its purity.” McLellin had read the arguments of critics like Cobb but insisted, “My evidences are above them all!”6

Principal among the evidences McLellin appealed to was the testimony of the eleven formal Book of Mormon Witnesses. He had known most of them personally, and it was their testimonies that converted him to the Church in the first place. On July 18, 1831, McLellin listened to Latter-day Saint missionaries preach, one of whom was David Whitmer. After his companion finished speaking, “D[avid] Whitmer then arose and bore testimony to having seen an Holy Angel who made known the truth of this record to him.”7

Over the next couple of weeks, McLellin continued listening to the missionaries preach. Then, knowing that they were headed for Independence, Missouri, McLellin started west on August 3, hoping “to get to Independence before them and see if the testimony of the other witnesses would agree with theirs.”8 On August 18, McLellin arrived in Jackson County, where he soon ran into David Whitmer again, this time with Martin Harris, whom McLellin now met for the first time. The two witnesses accompanied McLellin on a 10-mile journey out to one of the villages where Saints were gathering.9

The next day, McLellin met Hyrum Smith, brother of the Prophet Joseph and one of the Eight Witnesses. McLellin and Hyrum went into the woods for a private conversation that lasted four hours. “I inquired into the particulars of the coming forth of the record,” McLellin wrote in his journal, “of the rise of the church and its progress and upon the testimonies given to him [Hyrum].”10

Since first hearing about the Book of Mormon, McLellin had pondered all he had heard.11 Then, on August 20, he “rose early and betook [him]self to earnest prayer.” He wanted “God to direct [him] into truth.”12 As he prayed, McLellin had a realization: “from all the light that I could gain by examinations, searches, and researches I was bound as an honest man to acknowledge the truth and validity of the Book of Mormon and also that I had found the people of the Lord—The Living Church of Christ.”13 He was baptized later that day by Hyrum Smith.14

Over the next few months and years, McLellin would continue to have interactions with these three and other Book of Mormon Witnesses.15 This translated into a powerful testimony of and great love for the Book of Mormon. As a missionary—which included time as the companion of Samuel H. Smith, another one of the Eight Witnesses—the Book of Mormon and “evidences in its behalf” together with the witnesses’ “testimonies of its divinity” were “by far the most frequent [topics] in his sermons,” as he copiously recorded in his six missionary journals between 1831 and 1836.16

Despite his later disillusionment with Joseph Smith and the Church, his many experiences with the Book of Mormon Witnesses made a lasting impact on him. As he wrote to Cobb, “I became acquainted with all the Smith family and the Whitmer family, and I heard all their testimonies, which agreed in the main points; I believed them then and I believe them yet.”17

As he recalled later in life, one particular conversation with David Whitmer and Oliver Cowdery left him quite convinced of the honesty and veracity of their testimony. It was in late July 1833, “when mobbing reigned triumphant in Jackson Co.” The mob was specifically searching out McLellin and Oliver, and a reward was set on their heads. The two men had “fled from [their] homes, for fear of personal violence,” and both found themselves seeking refuge at the Whitmers’ settlement.18

“There, in the lonely woods” just outside the Whitmers’ farm, McLellin later recalled, “I met with David Whitmer and Oliver Cowdery.”19 McLellin confronted the two witnesses head on:

“Brethren, I never have seen an open vision in my life, but you men say you have, and therefore you positively know. Now you know that our lives are in danger every hour, if the mob can only catch us. Tell me in fear of God, is that Book of Mormon true?”20

Oliver Cowdery “looked at [McLellin] with solemnity depicted in his face” and responded: “Brother William, God sent his holy angel to declare the truth of the translation of it to us, and therefore we know. And though the mob kill us, yet we must die declaring its truth.”21 David corroborated what Oliver said. “Oliver has told you the solemn truth, for we could not be deceived. I most truly declare to you its truth!!”22 After hearing both men, McLellin responded: “I believe you. I can see no object for you to tell me falsehood now, when our lives are endangered.”23

Having received such powerful testimony first-hand from men he had known and served with for years, whose character and integrity he had observed directly, McLellin was right to demand a high standard of evidence from those criticizing the Book of Mormon. He held the book in deepest love and highest esteem and took the contents and doctrines of it very seriously and personally. So, in responding to Cobb, McLellin confidently and affirmatively went on the offensive.

When a man goes at the Book of M[ormon] he touches the apple of my eye. He fights against truth—against purity—against light—against the purist, or one of the truest, purist books on earth. I have more confidence in the Book of Mormon than any book of this wide earth! And it’s not because I don’t know its contents, for have probably read it through 20 times. I have read it carefully through within a year, and made many notes on it. It must be that a man does not love purity when he finds fault with the Book of Mormon!!24

In the present day, the opportunity to know and cross-examine the Book of Mormon Witnesses, as McLellin did, is gone. Hence, the writings and records of individuals like McLellin—who knew the witnesses well and questioned them about their experiences—are of tremendous value.

As Steven C. Harper observed, “It is hard to imagine someone better positioned to evaluate the testimonies of the Book of Mormon witnesses than William McLellin.” He had “no interest in sustaining” the Church, yet when it came to the Book of Mormon, “he was bound by the evidence to acknowledge its truth and validity.”25 Harper went on to add:

Thanks to the compellingly documented accounts of the witnesses’ testimonies left behind by McLellin and many others, seekers today too can make the rational and spiritual choice to embrace the testimonies of the Book of Mormon Witnesses and to enjoy and eternally cherish this fruit of God’s tree of life.