Book of Mormon Central / KnoWhys
Why Did the Wise Men Give Jesus Gold, Frankincense, and Myrrh? 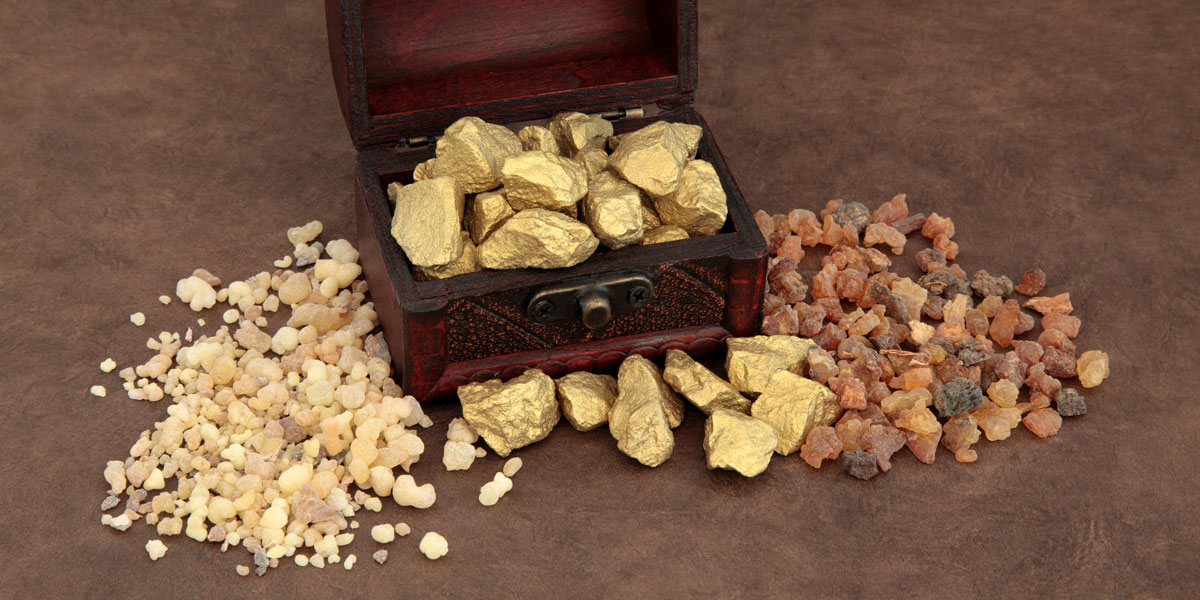 Gold Frankincense and Myrrh by Marilyn Barbone via Adobe Stock
“Behold, he offereth himself a sacrifice for sin, to answer the ends of the law, unto all those who have a broken heart and a contrite spirit; and unto none else can the ends of the law be answered.”

Shortly after Jesus was born, “wise men from the east” visited Him and gave Him gold, frankincense, and myrrh as gifts (Matthew 2:1). These gifts were all extremely valuable and expensive, and were the appropriate gifts for the “king of the Jews” as the wise men called Jesus (v.2). However, many people have shown that these gifts could be symbolic as well.1

Because crowns were traditionally made of gold, gold was thought to represent Christ’s kingship.2

The motif of Christ as King often appears in the Book of Mormon. However, many people do not recognize this because the Book of Mormon often uses words for “king” that modern readers associate with other things. The word Christ, for example, is Greek for “anointed one” and is often used to refer to kings, who were anointed when they received their coronation (see 2 Samuel 2:4).5

This word is the Greek equivalent of the Hebrew word Messiah, which also has the same connotations.6Therefore when we see “Christ” or “Messiah” in the Book of Mormon, one thing we should be thinking of is Christ’s role as Divine King.7

One occasion when the Book of Mormon mentions Christ’s role as priest is in 2 Nephi 2:7: “Behold, he offereth himself a sacrifice for sin, to answer the ends of the law, unto all those who have a broken heart and a contrite spirit; and unto none else can the ends of the law be answered.”8 The Old Testament refers to offering a sacrifice 49 times,9 and the Book of Mormon refers to it 5 times.10 In every case, offering a sacrifice refers to offering sacrifices according to the Law of Moses. Because these sacrifices were generally performed by priests, this verse is a reminder of Christ’s role as priest (see Hebrews 9:11).11

The power of Christ’s death and resurrection is the essence of the Book of Mormon, and it shows that Christ’s death is essential for all humanity: “Behold, they will crucify him; and after he is laid in a sepulchre for the space of three days he shall rise from the dead, with healing in his wings; and all those who shall believe on his name shall be saved in the kingdom of God” (2 Nephi 25:13).12 The Book of Mormon powerfully testifies that “the redemption of the people” is “brought to pass through the power, and sufferings, and death of Christ, and his resurrection and ascension into heaven” (Mosiah 18:2).

In a world where chaos sometimes holds sway, knowing that Christ is the king of the universe can bring comfort to our troubled lives.13 Christ rules over all that is, and will eventually triumph over evil, no matter how much evil we may sometimes experience.14 Because Christ is king, we can find peace.

Knowing that Christ is, as the author of Hebrews put it, “an high priest of good things to come,” (Hebrews 9:11) He can also help us as we go through life.15 The high priest of the Old Testament entered into the Holy of Holies once a year with the blood of an animal to atone for sins.16 But Christ, “by his own blood” has “entered in once into the holy place, having obtained eternal redemption for us” (Hebrews 9:12). Because Christ, the ultimate High Priest, has offered Himself for each of us, we can turn to Him to find redemption and to reconcile ourselves with God.17 Finally, because of Christ’s death and resurrection, we can all overcome death and pain. Christ's power allows all of us to be freed from the troubles of mortality, including physical death.18

Especially during the Christmas season, we can all remember the power of Christ’s Atonement and resurrection and the power He has to help us through our own lives. And when we think of the gold, frankincense and myrrh offered by the wise men, we can all remember Christ’s roles of king and priest and the power of his death and resurrection.19 These gifts, given by the wise men, remind us all of Christ’s gifts to us. These gifts can give us hope, reconciliation with God, and freedom from death.

“Scholars Focus Conference on Third Nephi,” Insights: The Newsletter of the Neal A. Maxwell Institute for Religious Scholarship 28, no. 6 (2008): 3–4.