Book of Mormon Central / KnoWhys
Why Did the Nephites Practice Baptism? 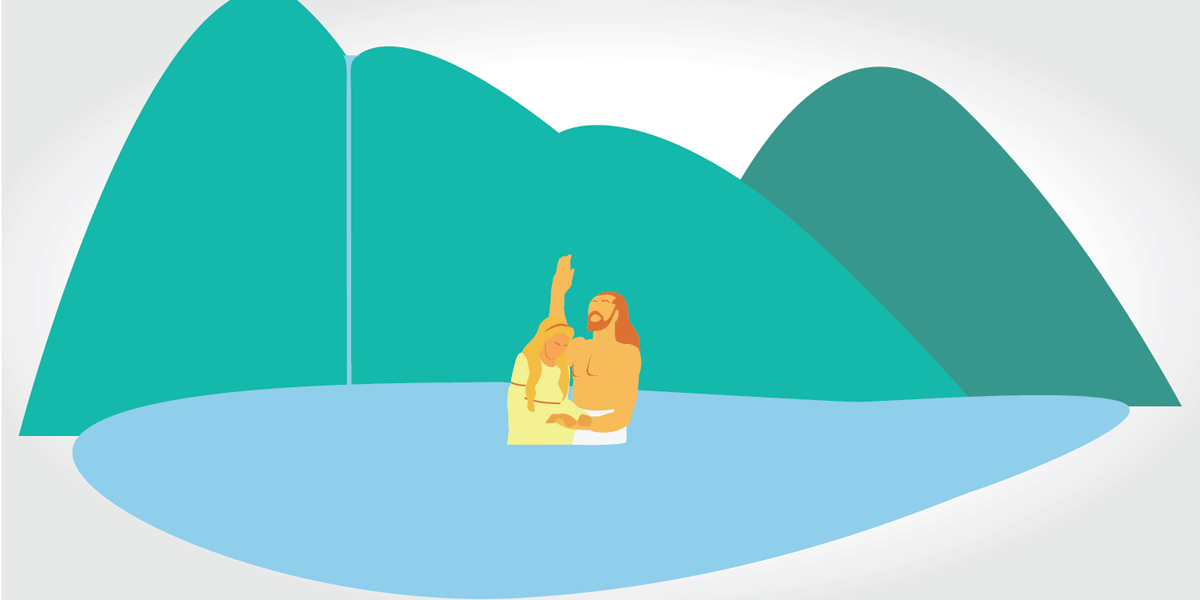 Image by Book of Mormon Central
“Behold, here are the waters of Mormon (for thus were they called) and now, as ye are desirous to come into the fold of God, and to be called his people, and are willing to bear one another’s burdens, that they may be light …. Now I say unto you, if this be the desire of your hearts, what have you against being baptized in the name of the Lord, as a witness before him that ye have entered into a covenant with him, that ye will serve him and keep his commandments, that he may pour out his Spirit more abundantly upon you?”

In Mosiah 18, Alma the Elder, who had been one of King Noah’s priests until being converted by Abinadi’s preaching, led a large group of people to be baptized in the “waters of Mormon.” Mosiah 18:1 says that Alma first “repented of his sins and iniquities,” and then “began to teach the words of Abinadi.” Those who believed his teachings went to a place called “Mormon,”1 where there was “a fountain of pure water” (vv. 4–5).

In the ancient world, baptism and other rituals for cleansing were required to be done with “pure water” (see Hebrews 10:22; cf. Ezekiel 36:25), which is likely why Mosiah 18:5 specifies this aspect of the waters of Mormon. When Alma and his people fled from King Noah into another land, they chose their new home based on the fact that it was also “a land of pure water” (Mosiah 23:4).

When Alma began to baptize people, he declared that their baptism would be “a witness before [the Lord] that ye have entered into a covenant with him” (Mosiah 18:10,13). Later on, when the righteous people of King Limhi wanted to be baptized, they understood that baptism was meant to be “a witness and a testimony that they were willing to serve God with all their hearts” (Mosiah 21:35; cf. 3 Nephi 7:25).

A covenant is a promise between two parties, each agreeing to do something for the other, if the other keeps his or her side of the promise. Alma’s teachings in Mosiah 18 provide one of the best accounts in all of scripture to help those who are newly baptized know what they must do to keep their covenant with the Lord:

God, for His part, promises to:

The covenant pattern used in Mosiah 18 follows the pattern found in the covenant made by the Lord with Israel at Mt. Sinai, and the experience of Alma can be compared to that of Moses.2

Interestingly, the name Mormon likely comes from an Egyptian word meaning "love, desire, or wish." When the people of Alma entered into the baptismal covenant and formed a church at the waters of Mormon, it was based on the principles of “love” and “good desires” (Mosiah 18:21, 28). Alma the younger would later speak of the “song of redeeming love” that his father and others had sung at the waters of Mormon (Alma 5:3-9, 26; see Mosiah 18:30).3

From Mosiah 18 and other examples, it is clear that in the Book of Mormon baptism is a symbol for the covenant that mortals make with God.4 No other book of ancient scripture makes this point as clearly.

Alma and his people, wherever they were, made finding sources of “pure water” a priority (Mosiah 23:4). This suggests that Alma and his people recognized how important baptism and spiritual purity would be in building up the Church of Christ in their new land.

What may not be immediately clear to readers is that Alma’s description of the baptismal covenant is tied into the atonement of Jesus Christ—in that he asked recent converts to imitate Christ’s perfect love—charity. Such “love” is reflected in the Egyptian meaning of Mormon, and is also at the heart of what it means to be a Latter-day Saint—or “Mormon,” as some might say. Alma asks his followers to, like Christ, love one another by suffering vicariously the pains of others and having compassion on those who are in need of help and comfort. This is what the Savior does for us, and what we commit to do for others.5

When we renew our covenants as we partake of the Sacrament, we have the opportunity to remember what Christ has done for us through His love and atoning sacrifice. We can reflect on what it means to take upon ourselves His name and evaluate how well we are following Him and doing what He would do.

Elder Robert D. Hales, “The Covenant of Baptism: To Be in the Kingdom and of the Kingdom,” November 2000, online at lds.org.

Elder Bruce D. Porter, “The First Principles and Ordinances of the Gospel,” October 2000, online at lds.org.