Why Did Jesus Minister to the People One by One? 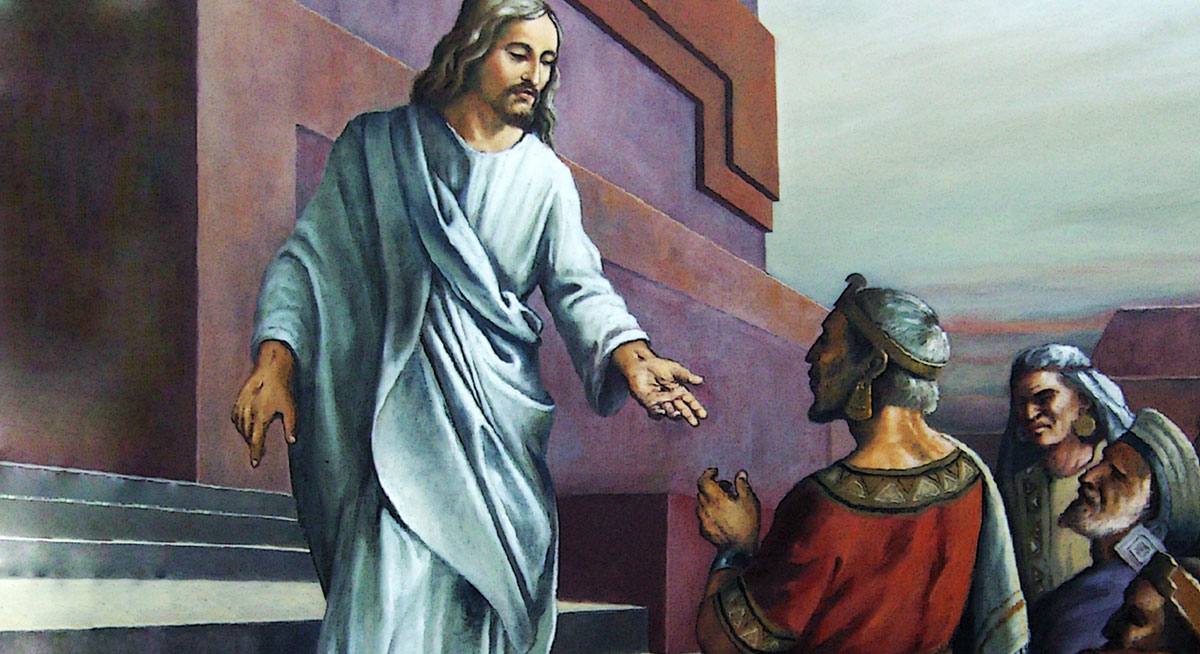 Christo en America, Jorge Cocco Craquelure
"And he took their little children, one by one, and blessed them, and prayed unto the Father for them."

When Jesus ministered to individuals among the Jews, His blessings were often accompanied by acts of physical contact. For instance, “when He healed Peter's mother-in-law of a fever, Jesus ‘touched her hand’ …. Jesus again ‘put forth his hand, and touched’ a man with leprosy to make him whole …. He touched the eyes of two blind men as He healed them …. He healed deafness and a speech impediment when He put His fingers ‘into’ a man's ears …. He ‘put his hands upon’ a blind man …. He healed a demoniac child when He ‘took him by the hand and lifted him up’ …. [and He] healed Jarius' daughter when He ‘took her by the hand’ and raised her from the dead.”1

Third Nephi, sometimes referred to as the fifth Gospel in Latter-day Saint circles, describes Christ's post-Resurrection ministry to the Nephites in terms similar to those used in the four New Testament Gospels. It emphasizes the individual experiences of the Nephite people with the resurrected Messiah, noting their direct physical contact with as well as His laying on of hands as the symbolic act of transmitting authority and power.2 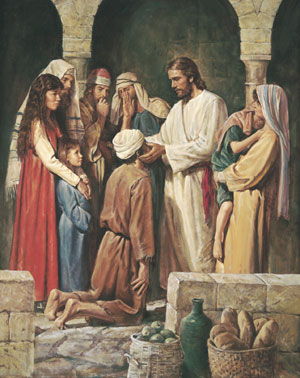 For example, when Christ first appeared to the people at the temple in the land of Bountiful, He invited them to feel His side, as well as His hands and feet, “and this they did do, going forth one by one until they had all gone forth” (3 Nephi 11:15, emphasis added). Later Jesus asked the people to bring forth any who were sick or afflicted, “and he did heal them every one” (3 Nephi 17:9, emphasis added). After this, Jesus prayed for the people and then “took their little children, one by one, and blessed them, and prayed unto the Father for them” (v. 21, emphasis added).

Jesus “touched with his hand the disciples whom he had chosen, one by one” and “gave them power to give the Holy Ghost” (3 Nephi 18:36–37). And in his parting blessing, Jesus “spake unto his disciples, one by one,” asking them what they desired of him after he would be gone back to the Father (3 Nephi 28:1, emphasis added). The Savior’s personal touch was a strong and memorable part of his presence and loving ministry.

Concerning Christ’s pattern of intimately ministering to individuals, Holzapfel noted, “According to the Book of Mormon model, ministering often occurs ‘one by one’ as disciples come in contact with the Savior and with one another. In many cases a personal ‘touch’ is a symbolic means of transmitting God's love and power to an individual.”3

The transmission of priesthood authority and the performance of priesthood ordinances are particularly symbolic of Christ’s concern for individuals.4 Paul the Apostle taught that every person must individually “work out your own salvation with fear and trembling” (Philippians 2:12). Elder Russell M. Nelson similarly affirmed, “Only as an individual can one be baptized and receive the Holy Ghost. Each of us is born individually; likewise, each of us is ‘born again’ individually.”5 It is thus through the ordinances of the priesthood, administered one by one to every child of God who is willing to accept them, that Jesus Christ is able to “draw all men unto [Him]” (3 Nephi 27:15). 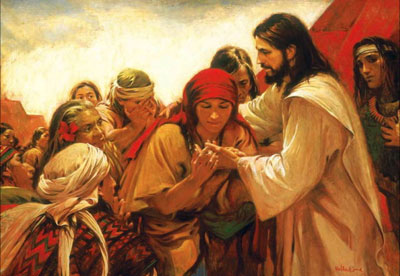 John W. Welch has noted that “under the old law, entrance into the Holy of Holies and into the presence of the Lord was the unique privilege of the High Priest,”6 which stands in sharp contrast to the individual immediacy of the Savior’s contact with people in 3 Nephi. Jesus Christ’s resurrected visitation to nearly “two thousand and five hundred souls” at the temple in Bountiful signified a dramatic expansion of the availability of His presence (3 Nephi 17:25).

Welch explained that the High Priest’s “privilege of entering into the presence of God foreshadowed or typified the same honor that will come to all of God’s righteous children” and that Christ’s Sermon at the Temple “extended the covenantal promise of this sacred privilege to all worthy men and women, who will stand someday in the literal presence of God."7 Holzapfel similarly concluded, “As disciples of Jesus Christ, we should recognize that Jesus swept away the legalistic regulations of the Mosaic code and touched those who had been considered ‘untouchable’ under the law.”8

Christ’s visitation to the people in Bountiful thus sends a very personal message to every reader of the Book of Mormon: Jesus Christ is a living, resurrected, and glorified being, and He has made Himself personally available to all those who are willing to come fully unto Him. This pattern continues into the Latter-days, as the Lord has invited, “seek the face of the Lord always” (Doctrine and Covenants 101:38), and has promised, “the days will come that you shall see him; for he will unveil his face unto you, and it shall be in his own time, and in his own way, and according to his own will” (Doctrine and Covenants 88:68; cf. 93:1). These invitations are evidence that in His own time and way, Christ will personally visit all who come unto Him.

Temples continue to be sacred spaces where the Lord or his authorized servants personally and individually minister to God’s children. President Howard W. Hunter taught, “Temples are sacred for the closest communion between the Lord and those receiving the highest and most sacred ordinances of the holy priesthood.”9 Concerning His temples in modern times, the Lord has declared, “my presence shall be there, for I will come into it, and all the pure in heart that shall come into it shall see God” (Doctrine and Covenants 97:16).

Jesus Christ’s pattern of ministering one by one to all of God’s children—especially in the precincts of holy temples and through the ordinances of the holy priesthood—ultimately shows His boundless love for every individual. Concerning Christ’s visitation to the Nephites, Hugh Nibley remarked, “He appears entirely to individuals. He always appears to individuals. That’s what atonement is. He greets them one by one, he gives them the signs and tokens one by one, he converses with them one by one, he blesses the children one by one.”10 Elder Ronald A. Rasband concluded, “Certainly, there is a very profound and tender personal message here. Jesus Christ ministers to, and loves us all, one by one.”11

Richard Neitzel Holzapfel, “One by One: The Fifth Gospel's Model of Service,” in A Book of Mormon Treasury: Gospel Insights from General Authorities and Religious Educators (Provo, UT: Religious Studies Center, 2003), 378–388.