Book of Mormon Central / KnoWhys
Why Did Ancient Israelites Lift Their Hands in Praise? 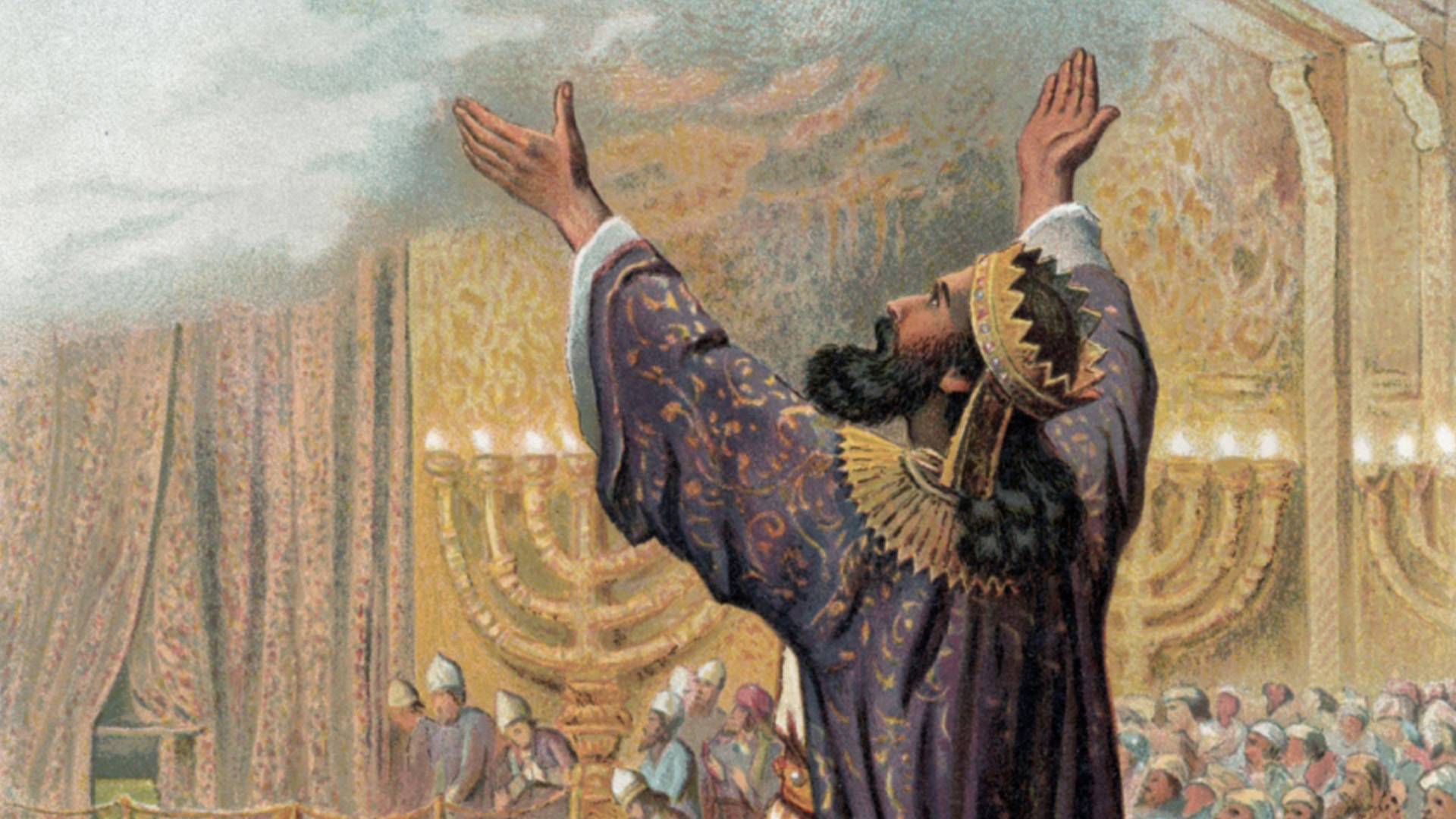 Solomon's prayer at the consecration of the temple. Artist unknown.
“And Ezra blessed the Lord, the great God. And all the people answered, Amen, Amen, with lifting up their hands: and they bowed their heads, and worshipped the Lord with their faces to the ground.”

The books of Ezra and Nehemiah detail how the ancient Israelites gave praise to the Lord when they rebuilt a temple back in Jerusalem following the Babylonian captivity. The children of Israel “sang together by course in praising and giving thanks unto the Lord. … And all the people shouted with a great shout” (Ezra 3:11). Nehemiah adds that the Israelites lifted up their hands while praying and worshipping the Lord: “And all the people answered, Amen, Amen, with lifting up their hands: and they bowed their heads, and worshipped the Lord with their faces to the ground” (Nehemiah 8:6).

Accounts of praying with uplifted hands are recorded multiple times throughout the scriptures, most often in connection to the first temple in Jerusalem. When Solomon dedicated his temple, he offered the dedicatory prayer “before the altar of the Lord … with his hands spread up to heaven” (1 Kings 8:22, 54). Many psalms related to the temple, such as Psalm 63, also describe the temple petitioner praying with their hands stretched towards the heavens: “Thus will I bless thee while I live: I will lift up my hands in thy name” (Psalm 63:4). The Apostle Paul similarly mentions praying by “lifting up holy hands, without wrath and doubting” (1 Timothy 2:8).

David M. Calabro has identified various ancient Near Eastern inscriptions that may offer some insight to this ancient practice. According to Calabro, these inscriptions “show that the prayer gesture essentially consisted of raising both hands with the palms facing outward. There was also a dynamic element, however, in the degree to which the hands were extended upward.”1 Isaiah may have been describing the varying degrees of lifting hands up when he spoke of one who would “spread forth his hands in the midst of them, as he that swimmeth spreadeth forth his hands to swim” (Isaiah 25:11). Should this relate to the prayer gesture, it “would imply that the gesture could involve some motion of the arms comparable to swimming (such as, perhaps, raising the hands and then lowering them).”2

Calabro has noted multiple possible interpretations of this ancient form of prayer.3 First, by exposing the hands and heart, it could show the Lord that the petitioner was pure and able to stand in the presence of the Lord. This is perhaps exemplified by Psalm 24:4, in which the requirements presented to enter the temple are offered as “clean hands, and a pure heart.” This purity could, however, be perverted when these gestures were performed unworthily. Thus, in Isaiah the Lord states that when Israel will “spread forth your hands, I will hide mine eyes from you” because “your hands are full of blood” (Isaiah 1:15).

The unworthiness of a people who performed sacred gestures such as praying with uplifted hands is similarly seen in Alma’s ministry to the Zoramites. When Alma and his companions arrived, they found that “the Zoramites were perverting the ways of the Lord” (Alma 31:1; cf. v. 11). As a part of this perversion, each Zoramite would climb the Rameumptom “and stretch forth his hands towards heaven, and cry with a loud voice,” offering a rote prayer (Alma 31:14). Mormon and Alma do not necessarily condemn this form of prayer, but the Zoramites’ open use of this sacred supplication procedure, which was typically reserved for temple worship, may have been the reason Alma and his companions “were astonished beyond all measure” by the Zoramites’ prayers (Alma 31:19).

Another observation is that this gesture may have “the purpose of attracting God’s attention” or may express “a desire for contact with God.”4 This suggestion may be supported in Psalm 63, which is offered by a temple petitioner seeking God’s presence (vv. 1–2). Calabro noted a possible set of ritual actions undertaken by the petitioner in approaching God, including lifting up their hands in prayer (v. 4), then rejoicing “in the shadow of [God’s] wings” (v. 7), which Calabro notes could be “perhaps alluding to an embrace,” and finally clasping God’s right hand (v. 8).5 Although it is possible to understand these references metaphorically, the temple petitioner here may be describing a set of ritual actions.6 Matthew B. Brown also identified such a ritual action in connection to this and other psalms.7

Other interpretations of the significance of these solemn gestures, such as showing one’s surrender before God, expressing one’s humility and desire to serve God, and requesting a specific blessing, have also been offered. It is important to remember that these “interpretations are not mutually exclusive; in fact, it is not out of the question that all of these interpretations of the raised-hand gesture coexisted even in ancient times.”8

Better understanding the gestures of approach used by the ancient Israelites can be instrumental for Latter-day Saints and can also offer additional context for many restored practices performed today. For example, similar to the people’s shouting “with a great shout” (Ezra 3:11), Latter-day Saints perform the Hosanna Shout at temple dedications or other significant meetings. This is done with uplifted hands, reminiscent of how the people prayed with uplifted hands at the dedication of the new temple in Jerusalem (see Nehemiah 8:6).

The temple is a holy and sacred place, and the gestures of approach performed therein are seen as equally sacred. Understanding this, Latter-day Saint readers can better understand the Lord’s rejection of some people for their wickedness in perverting these sacred gestures (see Isaiah 1:15; Alma 31:11). Temple goers can also recognize how temple worship today is a sacred and time-honored holy event, and patrons should take the greatest care to ensure that they honor and respect each of the Lord’s dedicated temples.

Understanding how ancient Israelites worshipped the Lord and praised him with raised hands can also add much helpful context to the scriptures. These gestures of approach and praise offered in the ancient temple can add to our understanding of how ancient Israelites viewed the temple and their relationship with the Lord as they worshipped Him there and submitted humbly to His covenantal guidance—and, by extension, how and why Latter-day Saints might better understand and appreciate all that the temple offers them in building their eternal relationship with the Lord.