Book of Mormon Central / KnoWhys
Why Did Alma Face Such Great Political Challenges as the Chief Judge? 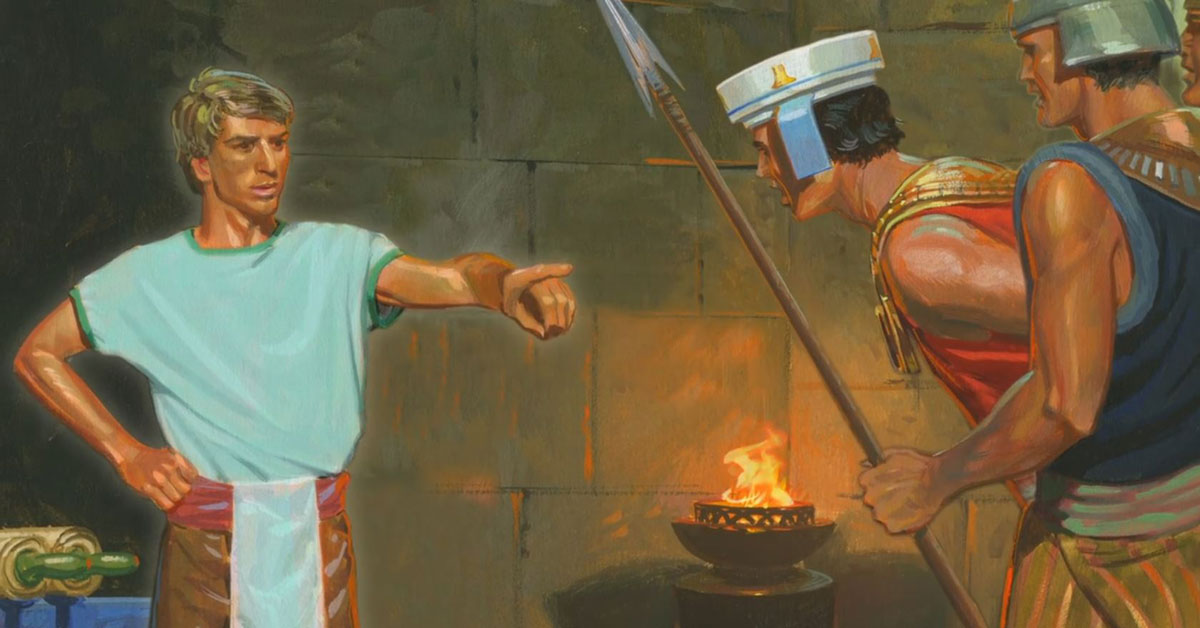 Still Image from “Alma and Nehor” via Gospel Media Library
“And it came to pass in the commencement of the fifth year of their reign there began to be a contention among the people …. And it came to pass that the people assembled themselves together throughout all the land … in separate bodies, having much dispute and wonderful contentions one with another”

Alma the Younger faced multiple challenges as the first chief judge of the Nephite people. All alone, without counselors or legislative committees, he had to figure out how their new form of government should work. There were no administrative handbooks or precedents. In his very first year in office, he had to adjudicate a high-profile case of enforcing priestcraft with the sword (Alma 1),1 quell a violent political insurrection (Alma 2–3), and address religious apostasy. This led to pride and inequality so great he decided, after eight years, to step down as chief judge to dedicate himself to preaching (Alma 4). The challenges Alma faced during these pivotal years of transition can be better understood by stepping back and looking at broader social, political, and religious forces going on in Zarahemla during this period.

“At this time,” explained John W. Welch, “the land of Zarahemla had become a very diverse place because of several major demographic changes.”2 First, there had been the merger of the Nephites and the Mulekites two generations earlier (Omni 1:12–19). Nephites were the ruling lineage, but a greater number of the people were of Mulekite origin (Mosiah 25:2, 13). The Nephites and the Mulekites had been united for two generations (Omni 1:19), and even bonded together by covenant (Mosiah 4–5). However, there was no doubt an undercurrent of tensions between them, especially if the Mulekites began to recognize and assert their perceived rights to rule as heirs of the Davidic monarchy.3

The People of Limhi

“Adding to the demographic complexity,” Welch also noted, “the people of Limhi had made a dramatic escape from the city of Nephi and arrived in the land of Zarahemla” toward the end of Mosiah’s reign (Mosiah 22).4 These people had separated themselves from the main body of Nephites and returned to the land of Nephi two generations earlier (Omni 1:27–29; Mosiah 6:1). Under the reign of three different kings (Zeniff, Noah, and Limhi), these people forged their own separate identity, independent of either Nephite or Mulekite groups in Zarahemla. We have no explicit details on how well they were integrated into society at Zarahemla, but assuming “normal social conditions prevailed,” then “it is unlikely that many of these newcomers or refugees were fully assimilated as equal citizens into the upper levels of Nephite society.”5

The People of Alma

“To compound matters further,” continued Welch, “the arrival of … people led by Alma the Elder added to the growing political diversity in Zarahemla,” and they “introduced new religious dimensions into the situation.”6Alma the Elder brought with him strong anti-monarchy ideals (Mosiah 23:6–15), and his people were united by covenant baptism (Mosiah 18). He immediately became influential with Mosiah, who granted him authority to establish churches that were apparently independent of the already existing temple priests in Zarahemla. Although this move was no doubt well intentioned and inspired, it “created several political problems,” such as setting the precedent for “less desirable religious, hereditary, or political groups, such as Nehor’s followers … to seek or assert the right to equal privileges and circumstances.”7

And beyond that, there was the underlying tribal structure of Nephite society itself. There were still Jacobites and Josephites, descendants of Lehi’s last two sons. There were also Zoramites, who maintained a strong enough tribal identity that they would soon (before the eighteenth year of the reign of the judges) separate themselves from the central Nephite government and build a countercultural center in a land they called Antionum (Alma 31:3).

Amidst this growing diversity, there were increasing dissensions from the teachings of King Benjamin among the rising generation—including, for a time, the sons of Mosiah and Alma the Younger. This led to contention and persecution between believers and dissenters, and forced Alma the Elder to “blot out” the names of those who would not repent (Mosiah 26–27).8

Mosiah attempted to carefully balance this very complex social, political, and religious environment as he transitioned the Nephites from a monarchy to a system of judges deriving its legitimacy from the variously assembled voices of the people (Mosiah 29:39).9 Yet, as Alma the Younger took over as chief judge, Zarahemla was clearly in a novel, precarious political situation.10 To make matters worse, Alma had to navigate this tricky transition without the mentorship of his father, Alma the Elder, or King Mosiah, as both passed away within the first year of his reign (Mosiah 29:45–46).

Recognizing all this diversity brewing in Zarahemla helps us appreciate the perfect storm it created in Alma’s day. While Mosiah’s own reign was likely complicated by these emerging political realities, these competing political tensions reached a head during Alma’s reign as chief judge.11 With social fissures lurking just beneath the surface, things began to unravel quickly within the first year of the reign of the judges. The challenges Alma bravely and faithfully faced as chief judge can be seen as direct results of the tensions embroiling Zarahemla.

The religious fault lines, unsettled by these political and social fractures, were the first to rumble. With a law which had “no power on any man for his belief” (Alma 1:17), and with many among the rising generation dissenting from the church of God, the way for an alternative religious order was opened up. Nehor filled that void by preaching the flattering doctrine that “all mankind should be saved at the last day,” regardless of their sins (Alma 1:4).12 Nehor crossed a line when he used violence to enforce his views, and thus he was tried and sentenced to death (Alma 1:7–15).13 This, however, “did not put an end to the spreading of priestcraft through the land” (Alma 1:16). The order of the Nehors would remain a long-term problem for Alma, not only as the chief judge but especially as the high priest.

Just as Alma was restoring the order and strength of the church, after years of diligent labor (Alma 1:26–28, 33), the delicate political harmony in the land began to unravel. In the fifth year of his reign as chief judge, Amlici and his supporters tried to reestablish the monarchy (Alma 2:1–2). When their attempt failed, they revolted, “consecrate[d] Amlici to be their king” (Alma 2:9), and started a bloody civil war (Alma 2:3–15). This would become a recurring problem for the Nephites and their federated peoples: 14 years later, a man named Amalickiah led a revolt seeking to be made king (Alma 46:3–10), and 9 years after that the group known as “king-men” wanted “to overthrow the free government and to establish a king over the land” (Alma 51:5).

Most of all, the desire for some to become kings and overlords fueled this conflict. All of these groups—the Amlicites (cf. Amalekites),14 the Amalickiahites, and the king-men—appear to share the Semitic root mlk, meaning “king,” and may have been Mulekite (another mlk root) in origin.15 It would make sense that the people of “high birth” who “sought to be kings” (Alma 51:8) in these movements were connected in some way with the Mulekite royal line and the accompanying desire of some to be elevated in power and superiority.

Alma succeeded in quelling the rebellion started by Amlici, but not without great bloodshed (Alma 2:35–38; 3:26). In the aftermath of this conflict, Alma had some success organizing and growing the church of God, but eventually challenges again arose (Alma 4:1–11). At this point, Alma came to realize that he could not successfully address the long-term challenges of both the church and the nation, and so he stepped down from the judgment seat, choosing to focus on his ministry as high priest (Alma 4:11–20).

Recognizing the complex social factors that erupted during the early years of the reign of the judges can help readers better understand why Alma faced such daunting challenges as the first chief judge. It also makes it clear that these were not the result of failures on Alma’s part as a leader. Rather, the social, political, and religious tensions in Zarahemla were, in effect, a ticking time bomb, bound to blow-up regardless of who was put in place as chief judge. All things considered, Alma handled the challenges he faced admirably, and ultimately realized that the only lasting solution would come through preaching “the word of God” (Alma 4:19; cf. Alma 31:5).

All this helps us not only to understand these repercussions that extended on into Nephite history, but also to avoid similar problems in our day by learning valuable lessons from the past.

David Charles Gore, The Voice of the People: Political Rhetoric in the Book of Mormon (Provo, UT: Neal A. Maxwell Institute, 2019).