Why Are Later Jewish Sources Relevant to Texts in the Book of Mormon? 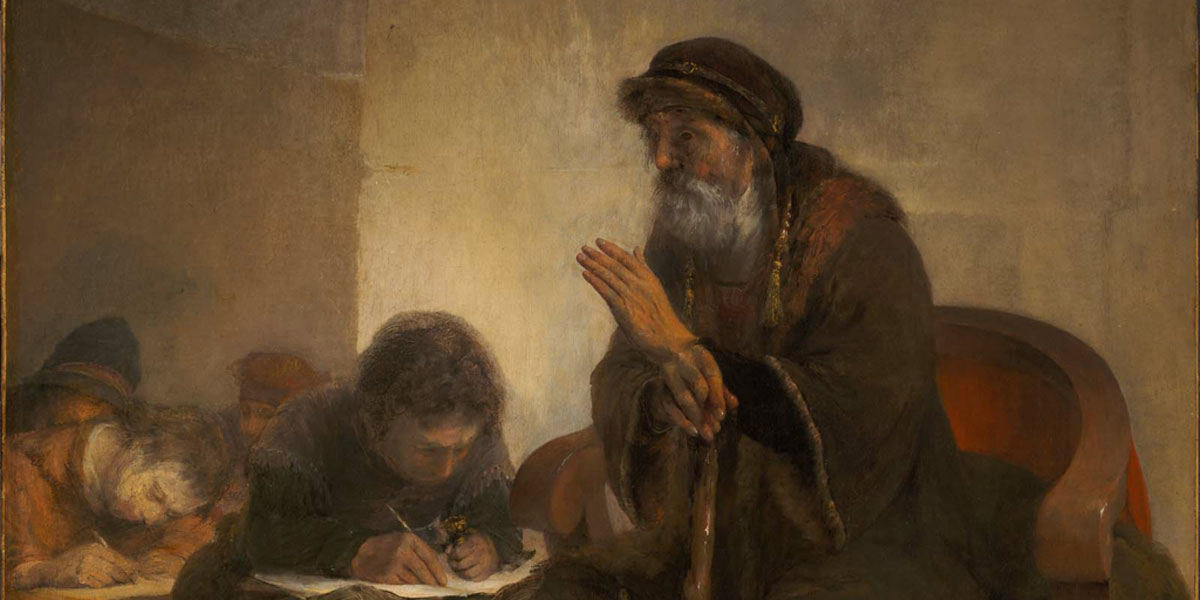 Sometimes, when reading the Book of Mormon, we find examples of things that exist in later Jewish sources, but that we have no evidence of from Book of Mormon times. 3 Nephi 4 records that the robber Zemnarihah was hanged, and that the tree he was hanged on was cut down.1 This is similar to Rabbinic teaching written years after Lehi left Jerusalem.2 As another example, a Jewish book from around the time of Jesus known as Biblical Antiquities, written by an unknown author called Pseudo-Philo, contains material that is very similar to Jacob 4–6.3

Such findings pose an interesting question: How could there be so many legal and literary similarities between details found in the Book of Mormon and texts written so many years after Lehi left Jerusalem?4

One possible answer to this question is that these early Jewish texts may well preserve details from hundreds, if not thousands, of years before they were written.5 The works of a Rabbi known as Rav from the third century A.D. is a good example of this. In his writings, Rav analyzed a verse which reads, “By his power he stilled the Sea; by his understanding he struck down Rahab” (Job 26:12, NRSV). This is generally understood to be a reference to the ancient image of God waging war against a cosmic monster that was thought to live in the sea.6 This idea is preserved in other parts of the Old Testament (see Isaiah 27:1), so, one might have expected that Rav would turn to another Old Testament verse to explain this passage.7 Instead, he turned to an ancient Near Eastern text from more than 1400 years before his own time.

In that case, at a site called Ugarit, north of Israel, archaeologists discovered in the 1930s a document from roughly 1200 BC, describing this cosmic monster.8 This text refers to the monster as the “Prince of the Sea,” a phrase that only appears in this text and not in the Old Testament.9 Surprisingly, this is the exact phrase that Rav used to describe the monster. In Rav’s commentary, God spoke to the “Prince of the Sea,” and gave him an order.10 When he refused, “God trampled on him and killed him, as it is said, ‘By his power he beat down the sea, and by His understanding He smote Rahab.’”11 This is one intriguing example of a rabbinic Jewish source preserving things from centuries before its own time. 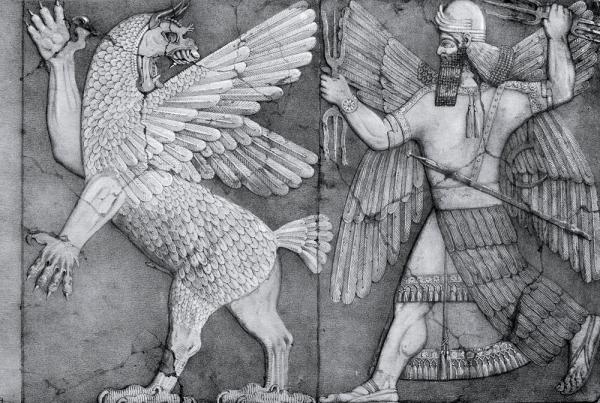 A bas-relief thought to be of Marduk and Tiamat from a temple at Nimrud dates the legend to at least the reign of Ashurnasirpal II (883-859 BC). Image via Wikimedia Commons

Another example of this comes from a rabbinic commentary on Job 9, written in the land of Israel in Roman times. Job 9:8 states that God “spreadeth out the heavens, and treadeth upon the waves of the sea.” The Rabbis commenting on this biblical verse connected it to an ancient Babylonian text known as the Enuma Elish.12 In this text, the God Marduk killed the sea-monster Tiamat and created the world’s oceans from her body.13

The Rabbis who commented on the verse in Job described treading on the waves of the sea using a word that is never used in biblical texts to describe this event.14 However, almost exactly the same word appears in the Enuma Elish to describe the killing of Tiamat.15 This rabbinic text reads, “What did God do? He trampled the water, and walked on it … as it is said, ‘He walked on the back of the sea’.”16

Ultimately, we cannot always know why or how some similarities exist between the Book of Mormon and ancient Jewish texts written after Lehi’s time. Some of these similarities may simply stem from two groups of people independently interpreting passages from the Old Testament in similar ways. However, the specific examples discussed above present several other possible explanations. In at least some cases, the Rabbis and other ancient Jewish authors may have preserved, through their oral laws, various expressions and practices that go back to times well before the life of Lehi. These things may have been preserved from that common cultural source also by the Nephites. Legal systems and norms were remarkably stable in the ancient Near East, and numerous practices were in fact handed down from generation to generation.

Indeed, changing the law in ancient societies was relatively rare. They had high respect for their laws (see Psalm 19:7-9). Among the Nephites, amending the law was even discouraged as a form of possible “wickedness” (see Mosiah 29:23). And since the Nephites aimed to obey the law strictly (2 Nephi 5:10; Jarom 1:5; Alma 30:2-3), they would have been careful to follow important practices of their inherited laws. These perspectives go a fair distance toward explaining why, not just a few, but many practices of the Nephites find counterparts in Talmudic provisions.17

These attitudes are instructive for us today. Any society based on the rule of law needs to encourage respect for established precedents and honorable officials. Such respect is nurtured by honoring, preserving, and sustaining the law. Just as the ancients preserved texts and traditions over the centuries, we are reminded of the importance of preserving honorable traditions today. The Church of Jesus Christ of Latter-day Saints has taken great care to keep and preserve records for future generations, often at great expense and sacrifice,18 and as commanded by scripture: “A record shall be kept” (D&C 21:1). Such efforts remind us of how important fundamental continuity is the Church.

The same can be said on a personal and family level as well. The people who preserved stories and ideas in ancient times did not know whom they would be benefitting, or in what way. However, the effort they spent in preserving these things proved to be useful to generations yet unborn. Our efforts to keep records by keeping personal journals and writing family histories may also prove to be important to our descendants many years in the future,19 preserving the blessings of liberty not only to ourselves but also to our posterity.20 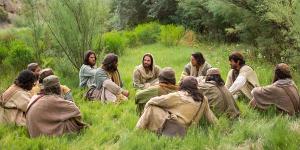