Vered Jericho Sword of Ancient Israel 600bc Steel by Shad Brooks
“The hilt thereof was of pure gold, and the workmanship thereof was exceedingly fine, and ... the blade thereof was of the most precious steel”

The sword of Laban is one of the most iconic objects in the Book of Mormon. It was passed down from generation to generation (Mosiah 1:16) and was apparently still being used in battle even during the time of King Benjamin (Words of Mormon 1:13). In June of 1829,1 the Lord told Oliver Cowdery, David Whitmer, and Martin Harris: “you shall have a view of the plates, and also of the breastplate, the sword of Laban” (Doctrine and Covenants 17:1). David Whitmer stated that this prophecy was soon fulfilled.2

Yet the Book of Mormon does not give much information about how the sword looked. Nephi simply stated that “the hilt thereof was of pure gold, and the workmanship thereof was exceedingly fine, and ... the blade thereof was of the most precious steel” (1 Nephi 4:9).3

Thanks to archaeological discoveries in recent decades, however, we now have more information about what this sword might have looked like.4 In the 1980s, archaeologists discovered a sword that has many similarities to Laban’s sword.5 It was found in Jericho, a city near Jerusalem, where Laban was from, and it dates from around 620 BC, when Laban lived.6 Most surprising of all, it was made out of steel, just like Laban’s sword.7 Most surviving swords from this time period in the ancient Near East were made out of iron or bronze, so this sword, made out of steel, is a close match to the sword of Laban described in the Book of Mormon.8 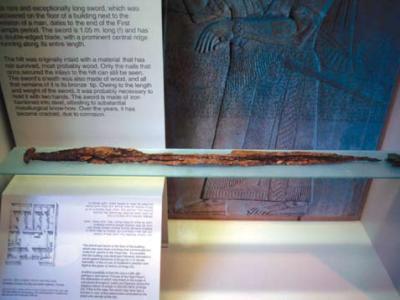 This sword from Jericho dates to about 600 BC and is on display in the Israel Museum. Photograph by Jeffrey R. Chadwick

The Jericho sword is three feet long and three inches wide, which is surprisingly long for the ancient Near East.9 However, it would have been much more difficult for Nephi to cut off Laban’s head if the sword were any shorter than this,10 so it is likely that Laban’s sword was roughly this size as well.11

Another interesting detail is that, according to a metallurgical study of the Jericho sword, “the iron was deliberately hardened into steel.”12 Ironworkers can accidentally produce lower-quality steel as part of the smelting process, but this iron was intentionally hardened into high-quality steel.13 If the same was true of Laban’s sword, this could explain Nephi’s comment that it was made of “most precious steel” (1 Nephi 4:9).14

Finally, it is possible that the sword of Laban had words engraved on it. Joseph Smith and Oliver Cowdery once saw a large room which contained many plates. “The first time they went there the sword of Laban hung upon the wall; but when they went again it had been taken down and laid upon the table across the gold plates; it was unsheathed, and on it was written these words: ‘This sword will never be sheathed again until The Kingdoms of this world become the Kingdom of our God and his Christ’.”15

It is hard to know if this was a somewhat symbolic vision, a vision of a real location with real items, or an actual cave which they visited in upstate New York. In any case, if they were seeing the actual sword of Laban, either in vision or in person, then this gives us one more detail about its appearance. 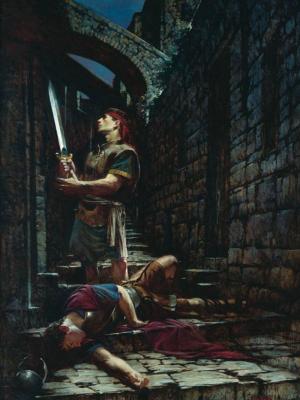 I Did Obey the Voice of the Spirit by Walter Rane. Image via lds.org

This situation can offer valuable lessons for us today. When we have questions about the Book of Mormon that we do not have good answers to right now, we should simply remember the Sword of Laban, and know that the answers will come eventually.22 Neal Rappleye, commenting upon Sam Wineburg’s illuminating case study on historical thinking,23 has explained that “Wineburg found that mature historical thinkers displayed patience with the unknown. They were able to call attention to apparent contradictions without immediately seeking to resolve them.” Although this is uncomfortable, “mature historical thinkers ‘sat with this discomfort’ as they continued to review additional sources.” In the process, “they exercised what Wineburg called the ‘specification of ignorance’: a practice of identifying when you do not know enough to understand something.” One must then conclude with “‘cultivating puzzlement’: being able ‘to stand back from first impressions, to question … quick leaps of mind, and to keep track of … questions that together pointed … in the direction of new learning.’”24

If we will put some of our questions aside, for now, knowing that they will be answered eventually, we can develop a mature faith that will stand the test of time.