What Sacrifices did Lehi Offer to God in the Wilderness? 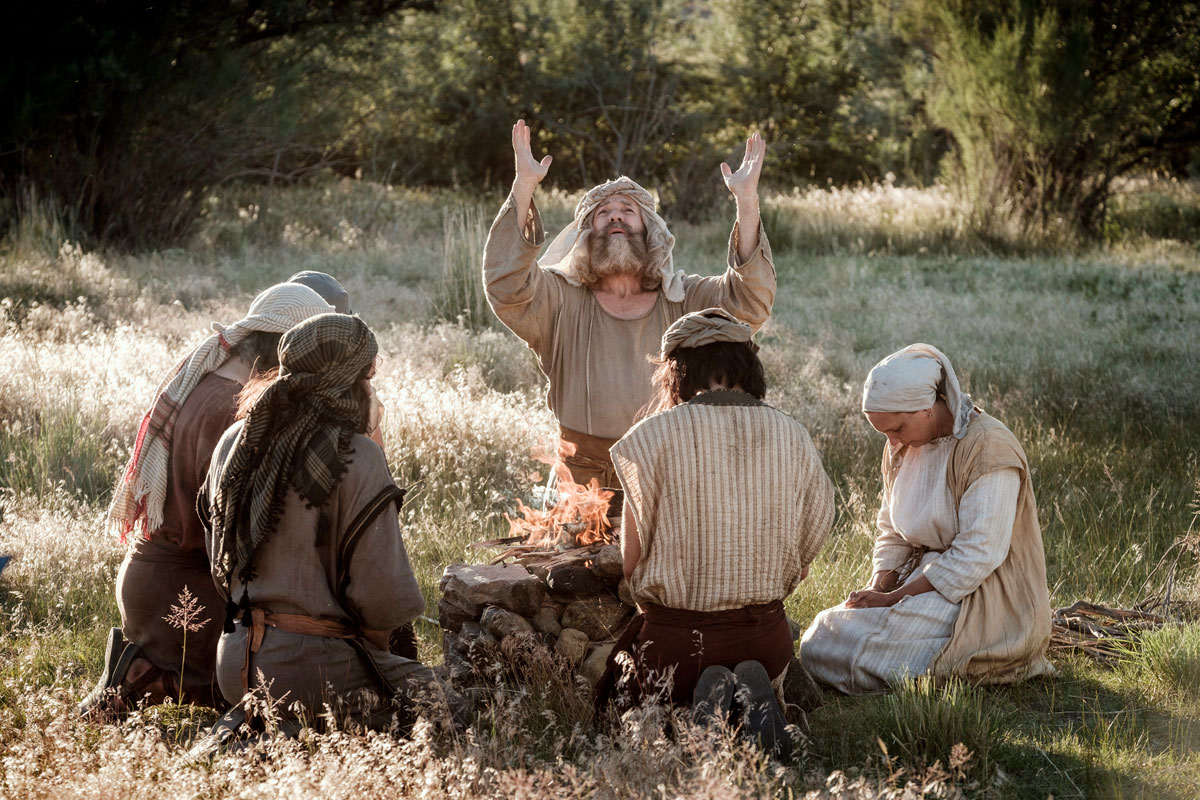 “Lehi and family offer burnt sacrifice” via Gospel Media Library
“They did give thanks unto the Lord their God; and they did offer sacrifice and burnt offerings unto him”

The Prophet Nephi recorded that on several occasions Lehi and his family offered sacrifices during their time in the wilderness (1 Nephi 2:7; 5:9; 7:22). In an important study of Lehi’s wilderness experience, Professor S. Kent Brown provided insight into why Lehi offered more than one kind of sacrifice.1

In ancient Israel, the peace offering (or well-being offering) may have been the most common form of sacrifice. These were freewill offerings, made after the fulfilment of a vow or to give thanks for other blessings. Reasons for gratitude could include deliverance from captivity, danger, sickness, or the completion of a safe journey by desert or sea.2 The common motivation behind such offerings was one of “rejoicing,”3 and they were considered “a spontaneous expression of love for God.”4

An offering taken from the flock or herd could be either male or female. After the animal was slain and the appropriate parts were offered to God upon the altar, the meat would then be shared between the one who offered it and his family in a joyful meal of fellowship before God (Leviticus 3:1–17; 7:12–15).

When Lehi first arrived at the Valley of Lemuel, he had just been delivered from those who had sought his life, and the Lord had protected him and his family on their journey through to the wilderness. Nephi wrote that Lehi “built an altar of stones and made an offering unto the Lord and gave thanks unto the Lord our God” (1 Nephi 2:7), so this was likely a peace offering of the thanksgiving variety. Similarly, he would likely have performed similar sacrifices upon each of the safe returns of his sons from their dangerous trips back to Jerusalem.

On the two later occasions, however, Lehi offered not only “sacrifice” but also “burnt offerings” (1 Nephi 5:9; 7:22). Why would this additional sacrifice have been needed?  Brown observes that, unlike sacrificial peace offering “a burnt offering was made for atonement—and more specifically, purging—after one had committed sin” (Leviticus 1:4).5 In contrast to the peace offering, which could be either male or female, the burnt offering was always a male animal; it was not eaten, but was entirely burnt upon the altar before God. When sin had occurred, it was necessary for repentant individuals to first offer a sacrificial burnt offering seeking atonement from God before they could offer a peace offering to participate in a meal of fellowship. As one biblical scholar explained,

Only after the head of the family had made expiation for his own sins and for those of his family, rendering himself and his family acceptable to God, were they in a position to enjoy a festive meal before God . . . .

The whole offering [i.e. burnt offering] with its atoning merits was foundational to an offering that emphasized fellowship. The whole offering rendered the offeror acceptable to God. Afterward he was free to fellowship with his family or clan before God in a festive meal featuring portions of the offering of well-being.6

Brown observed that this order of things is consistent with what Nephi recorded about his family’s situation and actions. When Lehi and his family first arrived in the valley of Lemuel, they had been obedient to the Lord’s commandments and gave thanks by offering up a peace offering. When Lehi’s sons returned to their camp with the plates of brass, however, sin was an issue. Laman and Lemuel had murmured (1 Nephi 3:5; 4:4), had become angry, had spoken many hard words, had beaten their younger brothers, had been reproved by an angel who had to intervene, and still had doubted that it was possible for the Lord to deliver Laban into their hands (1 Nephi 3:28–31). Before their safe return, their mother Sariah had also complained against Lehi (1 Nephi 5:1–2). These would have required repentance and the need to seek atonement from God.

When Lehi’s sons returned to the camp for the second time with Ishmael’s family, sin was also an issue because of the rebellion of Laman and Lemuel and the sons of Ishmael. They wanted to return to Jerusalem (1 Nephi 7:7). They had also become angry, bound their brother, and attempted to abandon him to be killed by wild beasts (1 Nephi 7:16). Although they subsequently repented and sought Nephi and the Lord’s forgiveness, the issue of sin was clearly an issue that needed to be resolved within the entire family. Burnt offerings were a necessary step before full reconciliation with God could take place. This subtle difference between each of the references to Lehi’s sacrifices may be missed by most readers but are consistent with Israelite practices of the time.

Lehi was bringing to the altar sacrifices that would atone for sin, sin that would stain the camp and those within it. And in each case, one can readily detect sin in the prior behavior of family members, whether it took the form of complaining, family jousts, or the taking of human life. Here, Lehi sought to free his extended family from the taint of unworthiness so that he and they would be able to carry out the purposes of the Lord.7

The practice of animal sacrifice before the death of Christ pointed to the work and blessings offered by our Savior and Redeemer. It showed that it could only be through Jesus Christ that we could attain lasting peace and reconciliation with God and others. It was also was a reminder to all that the cost of redemption from sin was costly. The God of Israel came down among men and suffer and die in order to provide a way for us to return to God’s presence and find happiness there. It cost His life to bring us life eternal.

Following his death, Jesus abolished the practice of offering up sacrifices through the shedding of blood, and he then commanded, “Ye shall offer for a sacrifice unto me a broken heart and a contrite spirit” (3 Nephi 9:19–20). He promised that we can thus be sanctified by the gift and power of the Holy Ghost and have eternal fellowship with God and salvation in his kingdom (3 Nephi 27:19–20).

In his Sermon at the Temple, Jesus taught the Nephites that, before we come before him in worship, we must repent of our sins and seek reconciliation with God and with those whom we may have offended.

The promises of the Gospel of Jesus Christ and its covenant blessings inspire us to look forward to joyful heavenly reunions with alienated or departed friends and loved ones. In eternal fellowship, the sanctified will “have place to sit down in the kingdom of God, with Abraham, with Isaac, and with Jacob, and also all the holy prophets, whose garments are cleansed and are spotless, pure and white” (Alma 5:24).

Book of Mormon Central, “How Could Lehi Offer Sacrifices Outside Jerusalem?” KnoWhy 9 (January 12, 2016).

Book of Mormon Central, “Why Did Jesus Tell All People to Sacrifice a Broken Heart and a Contrite Spirit?”  KnoWhy 198 (September 29, 2016).