Book of Mormon Central / KnoWhys
What Does Mary Whitmer Teach Us About Enduring Trials? 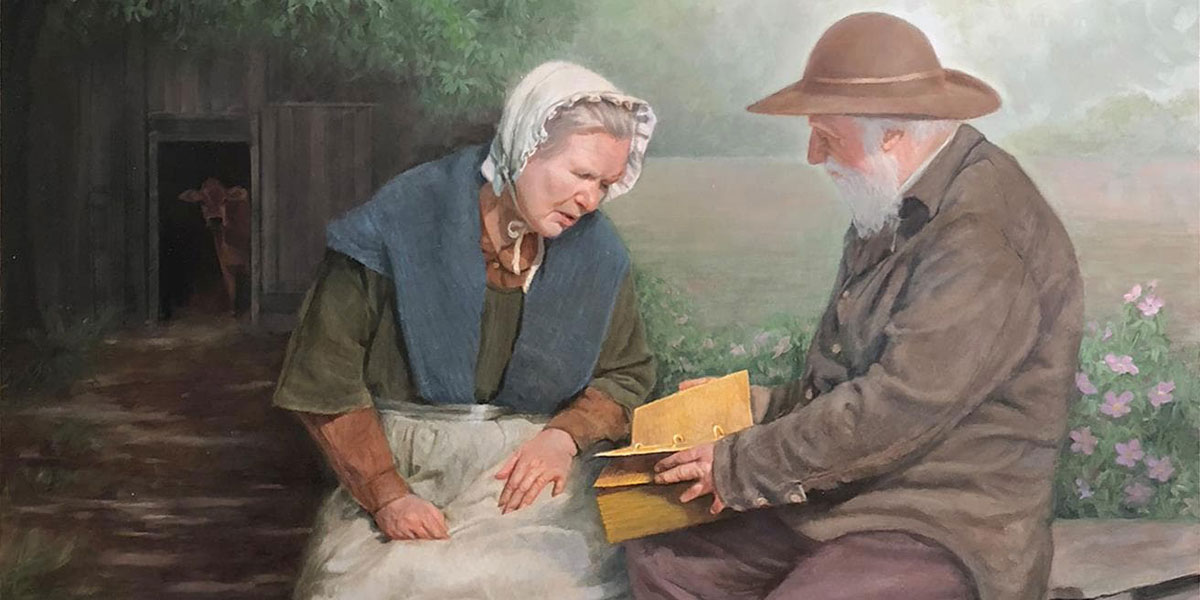 “Mary Whitmer and Moroni” by Robert T. Pack
“Wherefore, the Lord God will proceed to bring forth the words of the book; and in the mouth of as many witnesses as seemeth him good will he establish his word; and wo be unto him that rejecteth the word of God!”

The Three and Eight Witnesses of the Golden Plates stand out in Latter-day Saint History. Their testimonies are among the first words that many read in the Book of Mormon, and they stood by these testimonies to the end of their lives, despite trial and personal disaffection with Joseph Smith.1

But there are “unofficial” witnesses,2 including some of the prominent women of the early Restoration. They also stood by what they saw, heard, and felt through similar disaffections, hardships, and trials. And their names and stories should be remembered. 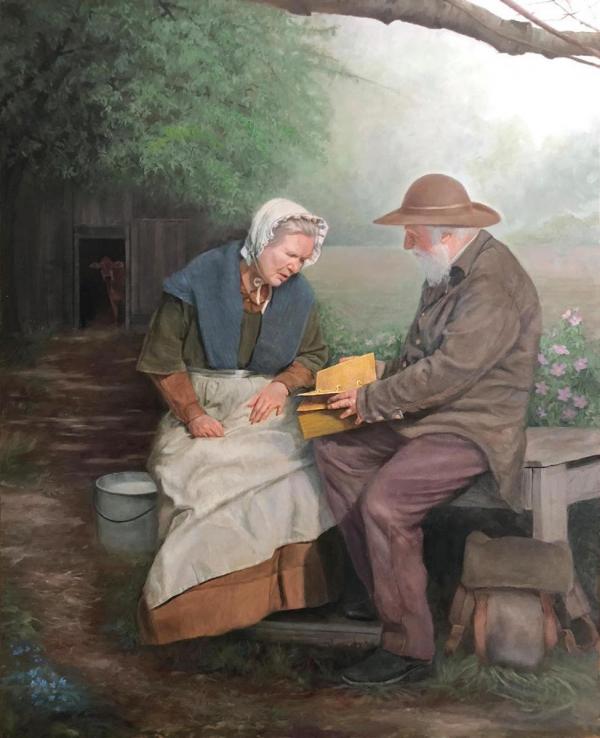 Among these women, Mary Whitmer is unique. Other than the Three and Eight Witnesses—who included her sons—she is the only known person to have seen the Golden Plates. Her experience was incredible and its importance, both to her personally and to the work of translation, should not be understated.

Joseph Smith and Oliver Cowdery began the translation of the Book of Mormon in April 1829, but persecution intensified quickly. Eventually, for safety, and so the work could continue uninterrupted, Joseph, Emma, and Oliver relocated to the home of the Whitmer family in Fayette, NY.

Though miracles attended their decision to help the young prophet and his family, the decision to take in and support three more adults was not an easy one.3 Peter and Mary Whitmer had a large family, and the burden would fall especially hard on Mary.4 With Joseph and Oliver focused on the translation and contributing little to their own upkeep, Mary bore the brunt of “cooking, cleaning, and caring for the visitors.”5

David Whitmer said that his mother never complained of the burden, but that she may have felt that the labor was too much.6 Joseph and Oliver, who would grow tired during translation, “often skated rocks on a pond.”7 Elvira Mills related that, “[Mary] thought that they might as well carry her a bucket of water or chop a bit of wood as to skate rocks on a pond,” and “[s]he was about to order them out of her home.”8

One day though, in the course of her chores, she went to the barn and met a stranger carrying something like a knapsack. Although she was frightened of the man at first, “…[H]e spoke to her in a kind, friendly tone, and began to explain to her the nature of the work which was going on in her house, and she was filled with inexpressible joy and satisfaction.”9

The man—an angelic messenger—opened the knapsack, showed Mary a bundle of plates, and “turned the leaves of the book of plates over, leaf after leaf, and also showed her the engravings upon them.” He told her “to be patient and faithful in bearing her burden a little longer” and made the promise that if Mary did, “she should be blessed; and her reward would be sure, if she proved faithful to the end.”10

“From that moment,” related her grandson decades later. “…[M]y grandmother was enabled to perform her household duties with comparative ease, and she felt no more inclination to murmur because her lot was hard.”11

Of her testimony, he said, “I knew my grandmother to be a good, noble and truthful woman, and I have not the least doubt of her statement in regard to seeing the plates being strictly true. She was a strong believer in the Book of Mormon until the day of her death.”12

Without Mary Whitmer’s support, the translation of the Book of Mormon would have come to a screeching halt. The appearance of the messenger with the plates provided Mary with spiritual and physical solace which she needed to help move the work forward.

Mary was the only known woman to have actually seen the plates. Beyond this, Mother Whitmer’s witness of the golden plates’ reality came before the Three and Eight Witnesses had received theirs.13 This is important. While her testimony is not canonized alongside those of her sons, its sheer existence—the messenger's actual appearance to her with the plates—serves as a critical reminder that the Lord is mindful of the prayers and needs of all His children, male and female.

In our individual lives and trials, we may not have the tangible witness that she experienced. We may instead have the blessing of the wives of the sons of Lehi, in the midst of a spiritual wilderness, to be strong and bear our journeyings without murmuring (1 Nephi 17:2). We may receive the blessings of the people of Alma, who in the midst of their persecutions, heard the voice of the Lord saying, “Lift up your heads and be of good comfort…I will also ease the burdens which are put upon your shoulders, that even you cannot feel them” (Mosiah 24:12-15). We may receive the blessing of Abish, who in the midst of turmoil, was able to reach out to a fellow daughter of God, who eased her sorrow (Alma 19:28-29). We may receive the strength of the mothers of Helaman’s Stripling Warriors, to not doubt that God will deliver us (Alma 56:47-48).

As he did for Mary Whitmer and countless men and women throughout the scriptures, the Lord will speak to each of us at our times of need. We can each receive our own witness of the truthfulness of the work.

Royal Skousen, “Another Account of Mary Whitmer’s Viewing of the Golden Plates,” Interpreter: A Journal of Mormon Scripture 10 (2014): 35-44.