Book of Mormon Central / KnoWhys
Was the Requirement of a "Broken Heart" Known Before the Time of Christ?

Was the Requirement of a Broken Heart Known Before the Time of Christ
"Behold, he offereth himself a sacrifice for sin, to answer the ends of the law, unto all those who have a broken heart and a contrite spirit; and unto none else can the ends of the law be answered."

Lehi, in his blessing to his son, Jacob, taught that the Messiah would offer himself up as a sacrifice for sin, which would benefit “all those who have a broken heart and a contrite spirit” (2 Nephi 2:7).1

Most Latter-day Saints are familiar with the idea of a sacrifice of a broken heart and contrite spirit as a new standard that Jesus established after his crucifixion, which was the “infinite sacrifice” (Alma 34:10, 14) after which no more animal sacrifices would be accepted.  Jesus, just before his visit to the Book of Mormon peoples after his resurrection, made a statement to that very effect: 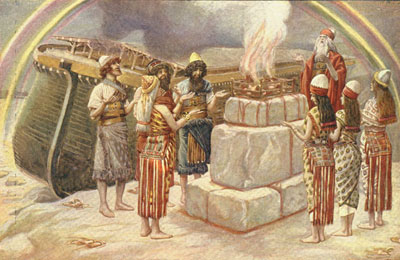 If this was a new standard instituted by the Savior after his death, then how did Lehi know about it and expect his people to live by it even though they still lived the Law of Moses and offered animal sacrifices?

The idea of offering a sacrifice of a “broken heart and contrite spirit” is rare in the Old Testament and does not appear in the New Testament at all. The idea that this teaching came directly from Jesus is unique to 3 Nephi.2

However, as Dana Pike, a BYU professor of ancient scripture, pointed out, although animal sacrifices were done away when Jesus fulfilled this part of the Law, main aspects of the principles and ordinances of the Gospel have been in place from the foundation of the world. Regarding the Law of Sacrifice, he explains: 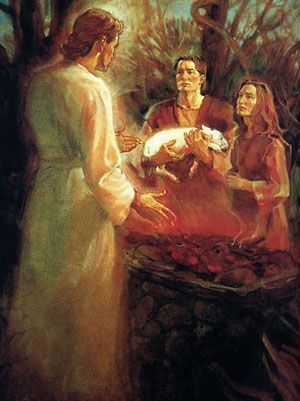 Just as the doctrines of faith in Christ, repentance, and baptism by water and by the Spirit were taught from the time humans first lived on the earth, so likewise the law of sacrifice was introduced to Adam and Eve at their expulsion from Eden (Moses 4:27). … Latter-day Saints therefore accept that just as faith, repentance, obedience, and other gospel requirements were necessary to qualify for the salvation prior to Jesus’s mortal ministry, the requirement that premeridian disciples of the Lord participate in all aspects of the law of sacrifice with heartfelt devotion was also expected by the Lord throughout those earlier millennia; it was not something originally announced to Nephite survivors when the Son of God concluded his saving mission.3

Pike justifies this conclusion by noting that “while passages in the Old Testament and the early portion of the Book of Mormon that convincingly mention the offering of a broken heart as a sacrifice to God are relatively few in number, they do exist.”4

The two principal examples that he cites come from the Psalms.

Pike explains that these two usages, along with the early Book of Mormon use of the terms “broken heart” and “contrite spirit,” “are sufficiently clear to indicate that this concept was taught and understood among God’s covenant people prior to the mortal mission of Jesus Christ. The need for a disciple of the Lord to offer a broken heart and contrite spirit was presumably part of the law of sacrifice from the very beginning. It was not initially instituted by Jesus in 3 Nephi 9:19–20.”5

Although the doctrine of sacrificing “a broken heart and a contrite spirit” does not appear explicitly in the New Testament,6 many would expect this would be a doctrine that could only be introduced in the Christian era and may find fault with the Book of Mormon for putting the notion in the mouth of the 7th Century B.C. prophet Lehi. 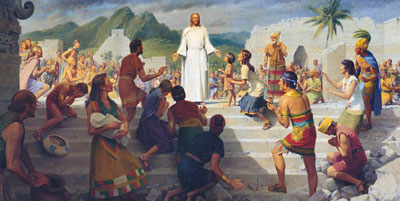 However, as Professor Dana Pike has demonstrated, this concept, although rare, is found in the Old Testament, specifically in passages from the Psalms that likely predate the time of Lehi. This provides evidence to support the notion that Lehi and his descendants could have been aware of the requirement to sacrifice “a broken heart and a contrite spirit” along with their animal sacrifices. Furthermore, it demonstrates that the more spiritual type of sacrifice was what was truly important, especially because the typological animal sacrifices would be done away with when the Messiah came to perform the true and infinite atoning sacrifice.

This presents an important lesson for modern Book of Mormon readers. No matter what sacrifice we offer to the Lord—be it our time, our talents, etc. – If this is not done with the true sacrifice of our hearts and spirits, then it cannot be fully acceptable to the Lord.

In 3 Nephi 12:19, Jesus gave as the essence of the new law the commandment “that ye shall believe in me, and that ye shall repent of your sins, and come unto me with a broken heart and a contrite spirit.” As Elder D. Todd Christofferson has observed, “As you seek the blessing of conversion, you can offer the Lord the gift of your broken, or repentant, heart and your contrite, or obedient, spirit. In reality, it is the gift of yourself—what you are and what you are becoming.”7