How Was the Transfiguration of Jesus and the Three Nephites a Temple-Like Experience? 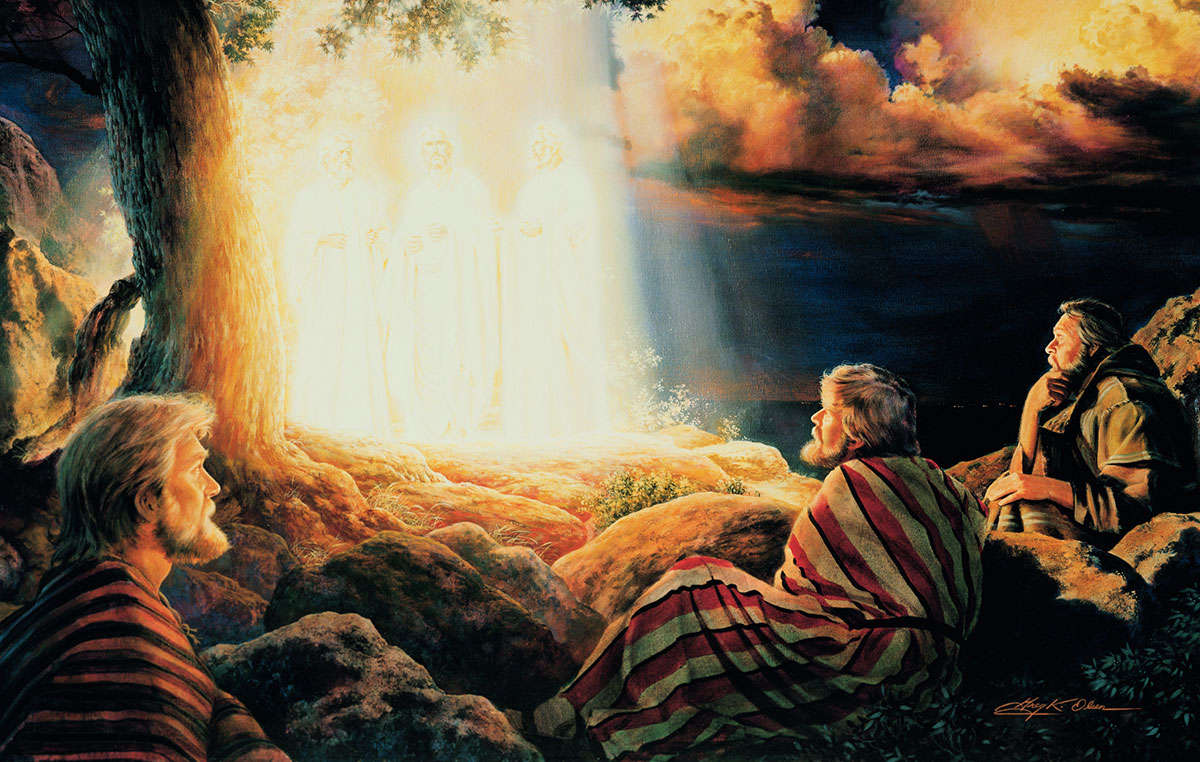 The synoptic gospels record that Jesus was transfigured in the presence of His three apostles Peter, James, and John (Matthew 17:1–13; Mark 9:2–10; Luke 9:28–36).1 These accounts agree with each other on the general details of what transpired at the transfiguration:

The individual gospel accounts offer slightly differing details that add to this episode. For instance, the Gospel of Matthew reports that the voice out of heaven (God the Father) declared not only that Jesus was His beloved son, but that He was “well pleased” with Him (Matthew 17:5).2 Luke reports that sleep came upon the three disciples during part of the event (perhaps because of the exertion that sometimes accompanies divine visitations or manifestations) and that the three awoke to behold Jesus’s glory and the two heavenly beings who stood with Him (Luke 9:32).3 Only Matthew says that Jesus touched them and bade them “arise” (Matthew 17:7). The Gospels of Matthew and Mark both record that it was Jesus himself who swore the disciples to secrecy about what transpired on the occasion (Matthew 17:9; Mark 9:9), a detail absent in Luke’s report, although Mark and also Luke affirm that they told no one the “things . . . they had seen” (Mark 9:9-10; Luke 9:36, see also 9:21).

Restoration scripture offers insight into this episode. A revelation received by the Prophet Joseph Smith in 1831 clarified that we have not yet received the full account of what occurred at the transfiguration, but that it apparently included a vision granted to the disciples of the final celestialization of the earth (Doctrine and Covenants 63:20–21).

A textual variant in the Joseph Smith Translation of Mark 9 also raises questions about who it was precisely that appeared to Jesus at the transfiguration:

The name Elias as it appears in the Greek New Testament is simply the Greek rendering of the name Elijah. However, the JST reading of this verse in Mark, together with the explanations in Matthew 17:13, indicate that “the disciples understood that [Jesus] spake unto them of John the Baptist and also of another who should come and restore all things.” It may be that John the Baptist and Moses were the ones at the Transfiguration rather than Elijah and Moses. In addition, the name Elias can refer to several messengers who are called to act in the capacity of an Elias, a forerunner or preparer. Perhaps, then, John the Baptist (Elias) came to prepare Jesus to be received into the presence of the translated prophets Moses and Elijah.4 This reading would be in harmony with how Elias is used broadly as a type for “forerunner” or for one who comes as a restorer in Joseph Smith’s revelations (and in the New Testament and even other nineteenth century Christian literature, for that matter).5 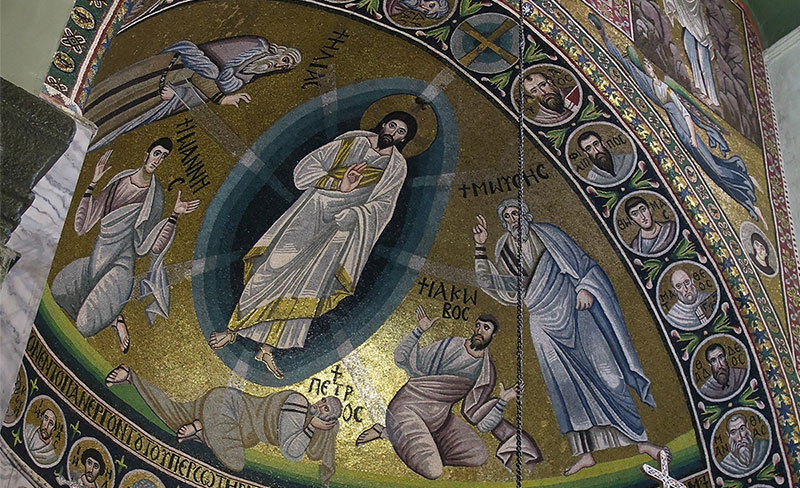 Mosaic of the Transfiguration of Christ above the altar in the chapel at St. Catherine's monastery in the Sinai. Photo by Laura Paskett.

Another occasion of “transfiguration” is recorded in the Book of Mormon (3 Nephi 28:15, 17). Here, the resurrected Lord was not the one transfigured. He had already been glorified. But three of His chosen disciples in the New World experienced a similar transfiguring event, including a greater fullness of blessings than circumstances had allowed Peter, James, and John to receive in the middle of Jesus’s Galilean ministry.

As recorded in 3 Nephi, after his previous appearances among the righteous people at the temple in Bountiful, the resurrected Jesus visited privately with His twelve New World apostles and offered them the opportunity to ask something of Him after He had returned back to the Father (3 Nephi 28:1). Three of those Nephite disciples wanted to ask, but “durst not speak unto [Jesus] the thing which they desired” (3 Nephi 28:5). Jesus, however, knew what they desired: “Behold, I know your thoughts, and ye have desired the thing which John, my beloved, who was with me in my ministry, before that I was lifted up by the Jews, desired of me” (v. 6). In other words, Jesus knew that these three disciples desired to “tarry until [Jesus] come in [His] glory,” and thereby be able to “prophesy before nations, kindreds, tongues and people” (D&C 7:3).

In response to this righteous desire, Jesus promised the three Nephite disciples:

These remarkable promises of divine transformation were then followed by a glorious vision. In this vision, “the heavens were opened, and they [the three Nephite disciples] were caught up into heaven, and saw and heard unspeakable things. And it was forbidden them that they should utter; neither was it given unto them power that they could utter the things which they saw and heard” (3 Nephi 28:13–14).

The text in 3 Nephi goes on to explicitly call this event a “transfiguration” twice (3 Nephi 28:15, 17), and comments that the three Nephite disciples “were changed from this body of flesh into an immortal state, that they could behold the things of God” (v. 15). Although he wanted to write more about this incident, including the names of the three Nephite disciples, Mormon was forbidden to do so (v. 25). What he was allowed to say was that “[the three Nephite disciples] are as the angels of God, and if they shall pray unto the Father in the name of Jesus they can show themselves unto whatsoever man it seemeth them good” (v. 30). 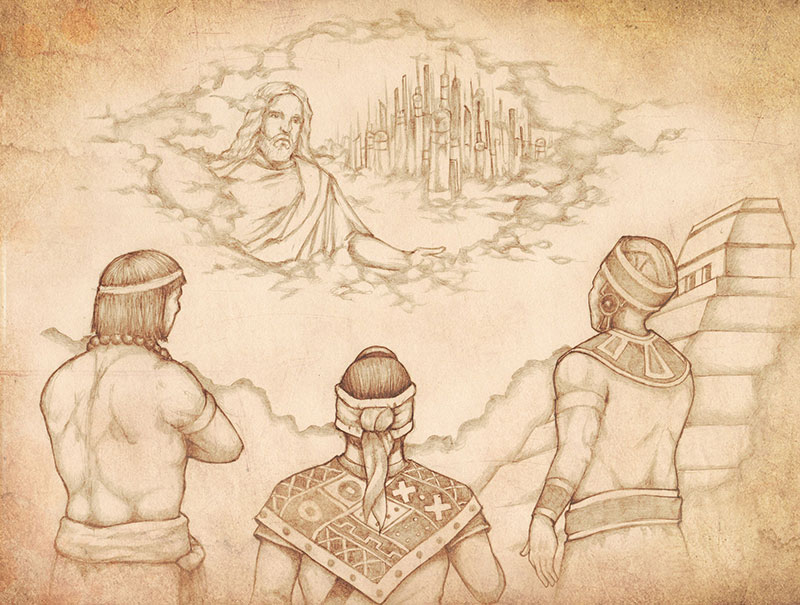 The Three Nephites see a vision of Christ. Drawing by Jody Livingston.

The shared elements in these transfiguring events reported in the synoptic gospels and in 3 Nephi invite the question, Can a wider pattern of sacred temple features be discerned as standing behind these two encounters with the divine? And why would the holy temple of ancient Israel be a point of common origin linking them? Because the law of Moses and the temple in Jerusalem were foundational for both the Jews in Galilee and the Nephites in Bountiful, one should not be surprised to find Moses and the holy temple of ancient Israel as a precedent in both of these spheres.

Indeed, the New Testament accounts of Jesus’ transfiguration share several elements with Moses’ encounter with God on the mount (as well as other Jewish motifs).6 The most obvious of these are the high mountain setting, Jesus being accompanied on the mountain by three companions, a cloud overshadowing the scene, a divine voice coming out of the cloud, and Jesus’ changed countenance and white clothing.

The fact that Moses himself was one of the personages who appeared to Jesus and the disciples during the Transfiguration leaves little doubt that the gospel writers wanted their readers to thematically link the supernal experience of the Old Testament lawgiver and prophet Moses with that of Jesus.7

Additionally, the element of Peter wanting to build “tabernacles” for Jesus, Moses, and Elias/Elijah further associates this episode with the temple. The Greek word used to describe the “tabernacles” Peter wanted to build (skēnē) is the same word used in the ancient Greek translation of the Hebrew Bible for the Tabernacle of Moses. A few scholars have even suggested parallels between the Transfiguration and the Jewish Feast of Tabernacles.8

Christians through the centuries have also recognized the significance that the transfiguration of Jesus held for the doctrine of theosis or deification (the teaching that Christ’s disciples had the potential to become like God).9 Several elements in the Transfiguration narrative were likened to the glorious transformation of believers at the time of Jesus’ return in early Christian literature.10 As one scholar noted, “This sense of transformation, theosis, can be detected in [the] account of the transfiguration.”11

Likewise, temple and deification themes are also unmistakable in the transfiguration of the three Nephite disciples, such as the three Nephites being promised that they would enjoy a “fullness of joy” and “sit down in the kingdom of [the] Father” where they would be one with Jesus and the Father (3 Nephi 28:10). The detail that the three Nephite disciples were “caught up into heaven, and saw and heard unspeakable things”—things that were “forbidden them that they should utter”—additionally links this passage to the temple and the process of becoming like God.12

Although we can only glimpse a small part of the power and expansiveness of each of these transfiguration experiences of Moses, Jesus, and the Three Nephites, we can begin to absorb more of their spirits of holy promise into our souls as we embrace and interlace them all.

Little wonder that the Savior, Moses, Elijah, and another Elias (John the Baptist?) would choose to appear to Joseph Smith and Oliver Cowdery in the Kirtland Temple when the time came to restore important priesthood keys (D&C 110). These keys would enable the Prophet to restore the ordinances of the temple, gather the house of Israel, and make available again the blessings of Abraham, thus providing God’s children the opportunity to return back to their Father’s presence and partake of eternal life, exaltation, and a fullness of joy (D&C 124:37–44; 132:7–24).13

This KnoWhy was made possible by the generous support of the Dow and Lynne Wilson Family.

Kenneth L. Alford, “I Will Send You Elijah the Prophet,” in You Shall Have My Word: Exploring the Text of the Doctrine and Covenants, ed. Scott C. Esplin, Richard O. Cowan, and Rachel Cope (Provo, UT: Religious Studies Center; Salt Lake City, UT: Deseret Book, 2012), 34–349.