How was Pahoran a Strong Leader in Turbulent Times? 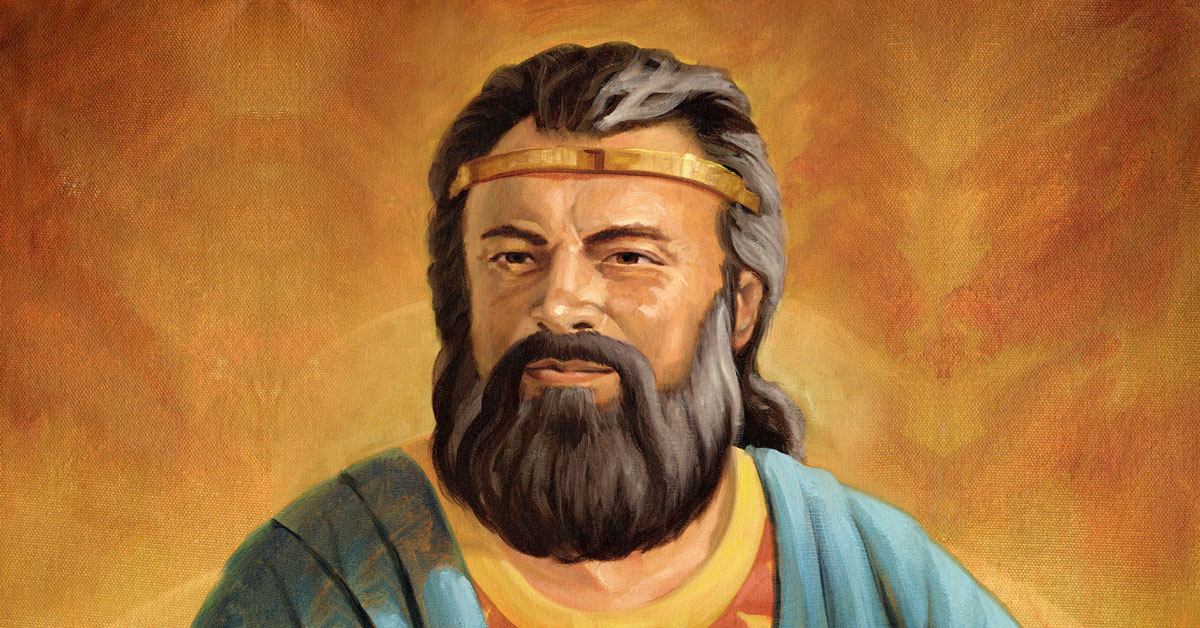 Pahoran by James Fullmer
“I, Pahoran, who am the chief governor of this land, do send these words unto Moroni, the chief captain over the army. Behold, I say unto you, Moroni, that I do not joy in your great afflictions, yea, it grieves my soul.”

Many great prophets, righteous leaders, and courageous heroes standout to readers as they follow the Book of Mormon’s complicated narrative threads. Everyone who reads the book can gain an appreciation and admiration for Lehi and Nephi, King Benjamin, Abinadi, both Alma the Elder and the Younger, and the sons of Mosiah. In the war chapters of Alma, valorous heroes like Capitan Moroni, Teancum, and Helaman with his stripling warriors fill the pages with their larger-than-life deeds.

In addition to these beloved and well-known figures, there are also many less recognized and often unsung heroes in the Book of Mormon: righteous men and women who go unnoticed by causal readers, and often fail to make a lasting impression upon the minds of even studious Book of Mormon readers. Pahoran, for example, was the chief judge or governor of the Nephites during one of the most tumultuous times in Nephite history, and is even a Book of Mormon author, since his letter to Moroni was embedded directly into the book of Alma (see Alma 61). Yet he often goes unseen in Capitan Moroni’s long shadow.

Careful consideration of the clues and details about Pahoran reveals him to be a principled and righteous leader worthy of study and emulation.

Pahoran took his father’s place as the chief judge and governor at the end of the twenty-fourth year of the reign of the judges (Alma 50:39–40). Initially, he may have been reluctant to fill the judgment-seat, but circumstances thrust leadership upon him.1 Immediately, as his reign began in the twenty-fifth year, the king-men arose and sought to have the law amended to allow monarchies to be established (Alma 51:1–6). Recognizing the divine origin of the Nephites laws, and threat monarchy posed to the freedom of the people, “Pahoran would not alter nor suffer the law to be altered” (Alma 51:3).2 This decision was backed up by the voice of the people, illustrating that from the beginning of his reign, Pahoran gained loyal support from his people (Alma 51:7).

As this matter was just being resolved, news reached Zarahemla of an invading Lamanite army. Seeing an opportunity, the king-men “would not take up arms to defend their country” (Alma 51:12–13). This created a dangerous situation.3 No doubt recognizing the serious risk this posed for the Nephite people, Pahoran granted necessary emergency powers to Capitan Moroni to allow him to handle this urgent situation in a timely manner (Alma 51:15–16).

Pahoran fades in the background as the narrative shifts focus to war efforts away from the capital. When Pahoran comes back into focus five years later (in the thirtieth year), it becomes clear that things at Zarahemla have been just as eventful as on the front lines. In response to a scathing rebuke from an understandably frustrated Moroni (Alma 60), Pahoran reveals that the internal dissention of the king-men has continued. The king-men were able to seize power at Zarahemla, were deliberately withholding support from Moroni’s armies, and colluding with the Lamanite attackers (Alma 61:3–5, 8).

This should not be taken to suggest that Pahoran was a weak leader. The majority of the Nephites’ eligible fighting men were out in the field, leaving the capital vulnerable. Pahoran was able to escape to Gideon, however, and establish a stronghold there. At Gideon, Pahoran rallied enough support for his cause that “those who have risen up in rebellion … do fear us and durst not come out against us to battle” (Alma 61:5–7). The situation had become a stalemate.4 From here, Pahoran “was somewhat worried concerning what we should do, whether it should be just in us to go against our brethren” (Alma 61:19).5

It was in this context that Pahoran received Moroni’s letter. No wonder he was able to so graciously reply, despite Moroni’s incensed tone.6 Pahoran knew Moroni’s stern rebuke did not matter at the moment (Alma 61:9), for there were larger issues at stake. Now was no time to get indignant about Moroni’s accusations. Pahoran recognized that Moroni was largely right about the circumstances in Zarahemla (minus Pahoran’s own involvement).7 What’s more, Pahoran actually received Moroni’s letter with joy, because it helped him see the best way out of his predicament (Alma 61:19).

Moroni had said, “Behold, the Lord saith unto me: If those whom ye have appointed your governors do not repent of their sins and iniquities, ye shall go up to battle against them” (Alma 60:33).8 With some added manpower and the experienced military leadership of Moroni, Pahoran knew they could overcome the stalemate and tip the odds in their favor. He quoted Moroni’s revelation back to him while trying to convince him to bring reinforcements to Gideon, so that together they could take back Zarahemla (Alma 61:14–20).9

And that’s exactly what happened (Alma 62:1–7). Pahoran was restored to the judgment-seat, the traitorous king-men were legally dealt with and peace was restored (Alma 62:8–11).  Thanks to a more stable political situation in Zarahemla, Pahoran determined to take a more active role in ending the war once and for all. He joined Moroni on the march to Nephihah, with provisions and reinforcements, and he actively helped reclaim that strategically important city (Alma 62:14–26).10 Pahoran actively led troops in the battle field until the war was over, when he finally returned to his judgment-seat, at the end of the thirty-first year (Alma 62:44).

Pahoran would remain the chief judge for another eight years before passing away (Helaman 1:2). His death precipitated a crisis in leadership, illustrating just how important he had been to stability of the Nephite government at a crucial time in its history.11 The importance of good leadership is widely recognized today, and many books have been written about the best leadership principles for business and politics.12 Commonly recognized principles of good leadership include leading by example, recognizing that leadership is about people and relationships, being willing to admit mistakes, understanding the value of listening, and working together to achieve more.

Remarkably, the brief of account of Pahoran’s activities available to readers today distills the essentials of leadership. Pahoran’s example yields twelve leadership principles that could be appropriately applied today:

Most important of all, in his nearly fifteen years as chief judge, he lived up to his oath of office:

to judge righteously, and to keep the peace and the freedom of the people, and to grant unto them their sacred privileges to worship the Lord their God, yea, to support and maintain the cause of God all his days, and to bring the wicked to justice according to their crime. (Alma 50:39)14