How Does the “Mosiah-First” Translation Sequence Strengthen Faith? 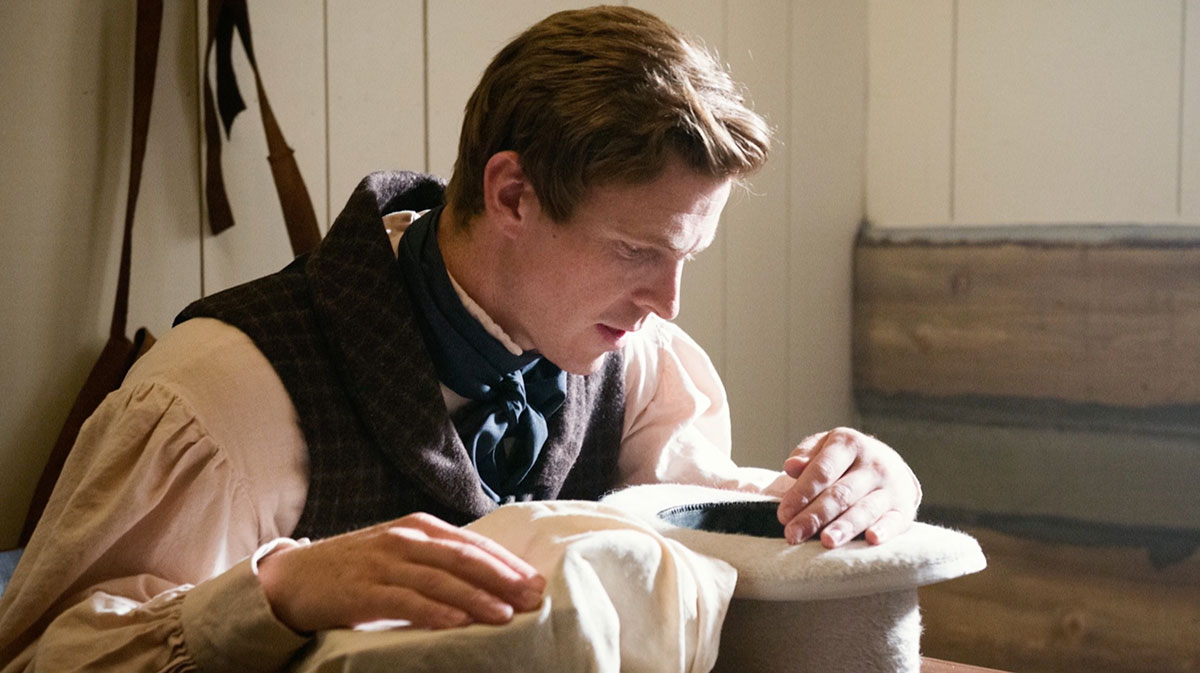 Still Image from “Seer Stones and the Translation of the Book of Mormon” via LDS Church History.
“Wherefore, I chose these things, to finish my record upon them, which remainder of my record I shall take from the plates of Nephi.”

Many readers of the Book of Mormon naturally assume that Joseph Smith translated its books in the order that we find them today, that is, beginning with the Title Page, and then translating 1 Nephi 1:1 through Moroni 10:34. It may be surprising to learn that the books from the Small Plates of Nephi (1 Nephi through Words of Mormon) almost certainly came last in the translation process, after the completion of Mormon’s abridgment of the Large Plates of Nephi (Mosiah through 4 Nephi), followed by the books of Mormon, Ether, Moroni, and the Title Page.

This unexpected translation sequence is due to the fact that the first 116 pages of the Book of Mormon’s translation—which contained a record called the book of Lehi—were lost by Martin Harris in the summer of 1828. When the translation resumed in April 1829, it appears Joseph Smith picked up where he had left off, namely in the early chapters of Mosiah,1 rather than retranslating Mormon’s record from the beginning.2

Thankfully, the Lord had a plan, more than two millennia in advance, to compensate for the lost book of Lehi. Important ancient documents were often “doubled,” and backup copies provided a safeguard against loss or damage.3 In keeping with this ancient practice, the Lord told Nephi to keep two sets of records—a historical and public record on his Large Plates, and a shorter, more spiritually focused record on his Small Plates.4 Thus, Nephi’s Small Plates contained an abbreviated account of what was on the book of Lehi, which was recorded in Nephi’s Large Plates (see 1 Nephi 19:1).5 Hundreds of years later, the Lord inspired Mormon to append Nephi’s Small Plates to his own abridgment (see Words of Mormon 1:3–7).6

This explains why the books from the Small Plates would show up last, rather than first in the translation process—that was their order on the plates themselves. When it came time to publish the Book of Mormon, Joseph and Oliver moved the transcription of Nephi’s Small Plates to the beginning of the text, where it provided an ideal starting point and replacement for the lost book of Lehi. 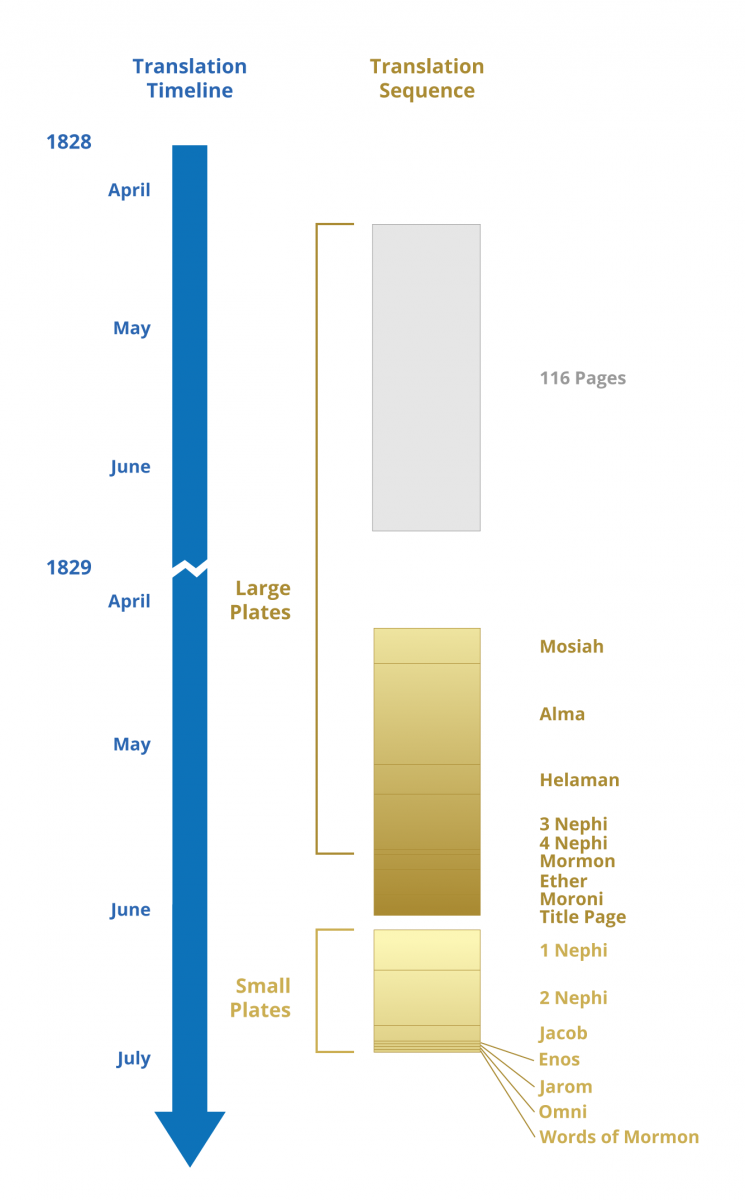 This chart depicts how after the 116 pages were lost, Joseph Smith translated from Mosiah to Moroni before returning to translate the small plates. Image by Book of Mormon Central.

This order of translation, commonly called the “Mosiah-First” theory or sequence, is strongly supported by multiple lines of evidence and is now favored by a solid scholarly consensus.7 Besides making clear sense of the manuscript and historical data, this understanding of the translation sequence also provides fascinating and somewhat unexpected evidence for the Book of Mormon’s authenticity. This is because many passages from Mormon’s abridgment of the Large Plates, as well as from the books of Mormon, Ether and Moroni, refer back to content from the Small Plates, even though the Small Plates hadn’t even been translated yet!

For instance, in Alma 36:22 Alma says that he thought he saw God even as Lehi had seen Him, “sitting upon his throne, surrounded with numberless concourses of angels, in the attitude of singing and praising their God.” Those words are a direct quote from the prophet Lehi found in 1 Nephi 1:8.

In Alma 50:23 Mormon stated that “there never was a happier time among the people of Nephi, since the days of Nephi, than in the days of Moroni.” This is surely a direct allusion by Mormon back to 2 Nephi 5:27, where Nephi had said that his people “lived after the manner of happiness.”8 Likewise, when the Amlicites set a mark upon their foreheads, Mormon declared, “Thus the word of God is fulfilled, for these are the words which he said to Nephi” (Alma 3:14). Mormon’s following statement, which shows how the curse of the Lamanites also came upon the Amlicites, is an obvious and extensive utilization of 2 Nephi 5:21–24.9

In yet another example, when Alma delivered his famous sermon on faith, he referred to the fruit of the Tree of Life as being “sweet above all that is sweet” and “white above all that is white” (Alma 32:42). This is a reference to the fruit in 1 Nephi 8:11 which Lehi described as being “most sweet, above all that I ever before tasted” and “white, to exceed all the whiteness that I had ever seen.” Similar allusions to Lehi’s and Nephi’s visions of the Tree of Life, as well as other content from Nephi’s Small Plates, can be found scattered throughout Mormon’s abridgment and Moroni’s conclusion.10 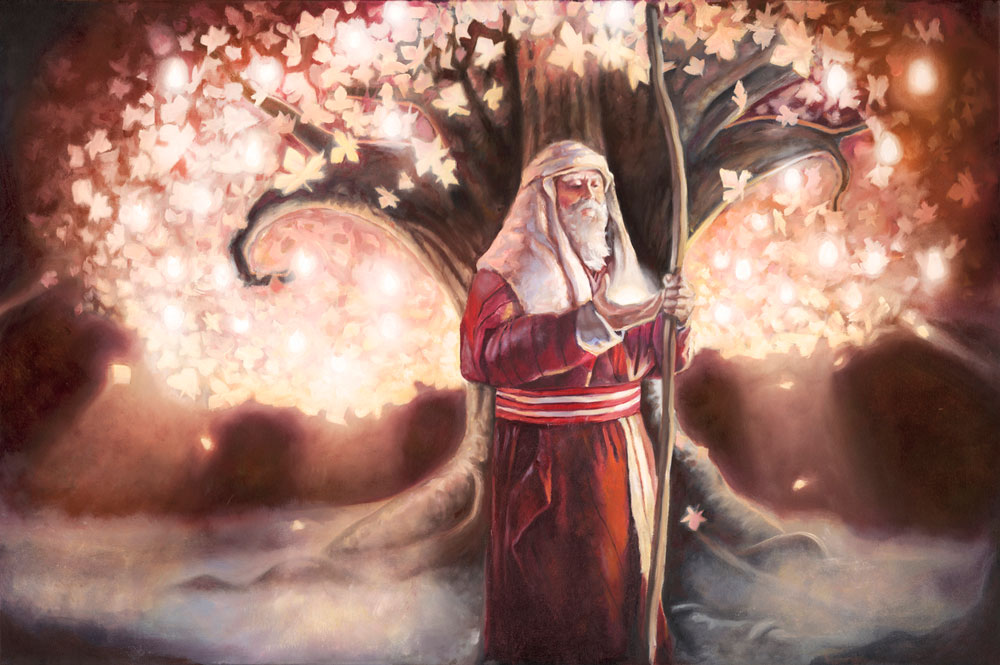 Into the Light by Lehi Sanchez. Submitted to Book of Mormon Central's 2018 Art Contest.

These relatively frequent allusions and references back to earlier textual strata make complete sense if the Book of Mormon is truly what it claims to be. Mormon, Alma, and other later prophets would have had Lehi’s and Nephi’s earlier writings to refer to and quote from.11 On the other hand, these allusions are difficult to explain if Joseph was simply making up the Book of Mormon’s content, as some have supposed.

Under the theory that Joseph composed (rather than translated) the text, he would have needed to make many detailed references back to passages that he hadn’t yet created. Not only that, but according to the eyewitnesses to the translation, he would have had to create and then remember all these references in a fast-paced translation setting, without any working notes or reference materials to aid his memory.12 And then, he would have needed, in composing the Small Plates last, to remember to accurately create the earlier layer of texts that later prophets had already referred and alluded to.

Commenting upon the allusions to the visions of the Tree of Life recorded in the Small Plates, literary scholar Alan Goff has argued, “It seems overly complicated to posit that a whole web of allusions to these tree of life images is created first and then later the coherent story that ties them all together.” Likewise, in regard to Mormon’s reference to 2 Nephi 5:21–24, as found in Alma 3:14, Goff explained,

If the Alma passage were written prior to the 2 Nephi passage, then Joseph Smith not only would have had to remember to pen the Nephi text without being able to refer back to the other passage but would also have had to build the specific reference to Nephi as the original source long before Nephi became the original source. All of this Joseph Smith would have to do without being able to refer to notes while composing at a rate of thirty-five hundred words a day.13

Further analysis suggests the task would have been even more difficult than Goff has proposed. Not only does Mormon’s abridgment repeatedly refer to specific passages in the Small Plates, but it seems that some of its major narratives were specifically designed to show the fulfillment of Nephi’s earlier prophecies.14 In other words, not only minor textual elements, but the core design and undergirding structure of Mormon’s abridgment was likely based on passages that, if Joseph were just making things up, hadn’t yet been written. That is a tall order for any writer, to say nothing of a manual laborer like Joseph Smith, who had little formal education and had never published a word in his life.15

This textual evidence casts significant doubt on the notion that Joseph was responsible for the content and wording of the Book of Mormon. It also helps demonstrate the Book of Mormon’s remarkable complexity and sophistication.16 As readers carefully pore over its pages, they will be continually rewarded with insights and connections that they hadn’t previously noticed. Upon reflection and pondering, they might happily discover new and unexpected reasons to trust that the Book of Mormon came forth as Joseph Smith repeatedly claimed—“by the gift and power of God.”17

References and Allusions to the Small Plates