How Does Nephi Use Isaiah to Teach Us to Avoid Pride? 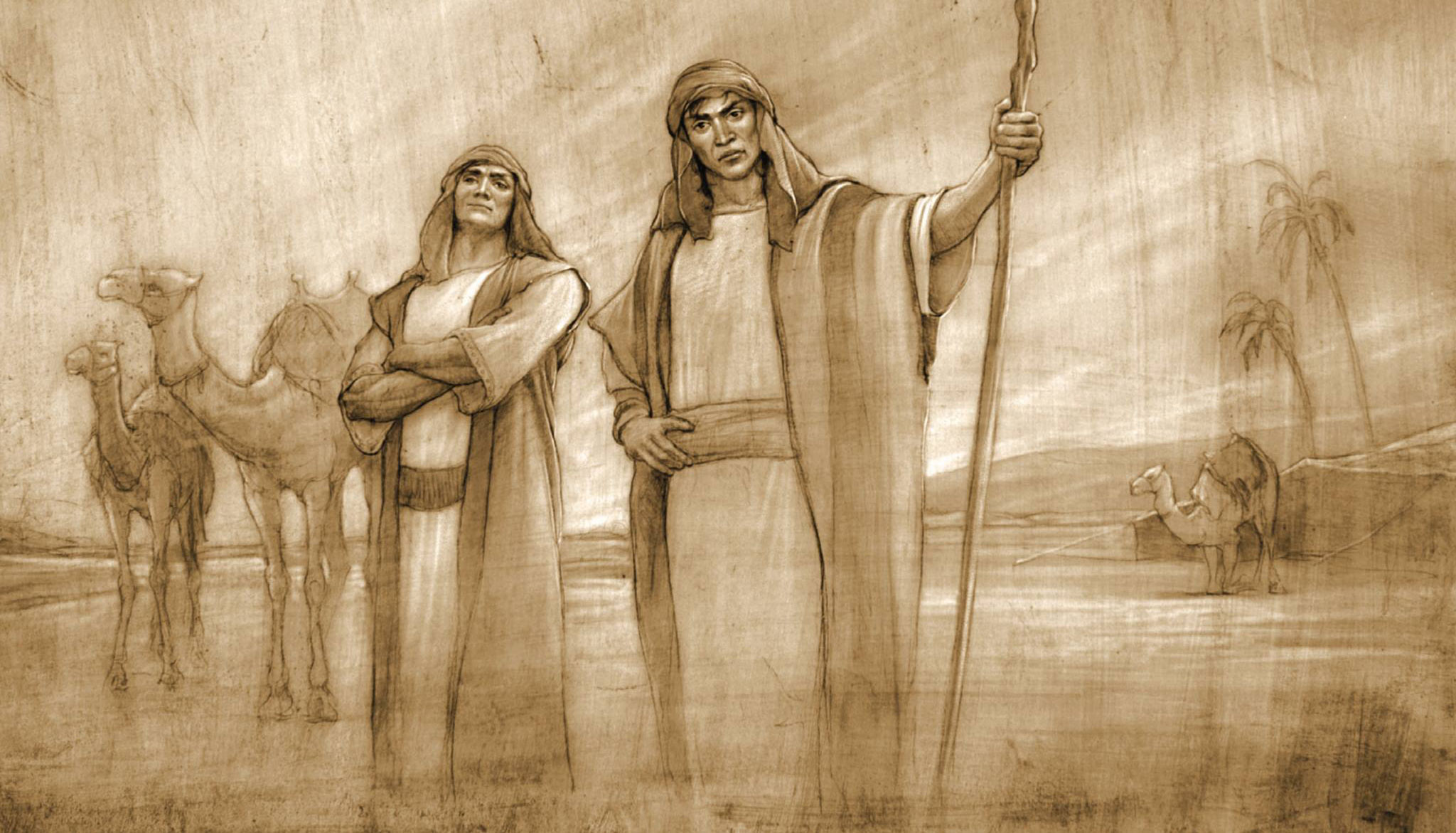 Laman and Lemuel struggled with pride, which kept them from fully accessing the Spirit. Image courtesy of Joseph Brickey.
“Wo unto the wise in their own eyes and the prudent in their own sight!”

One of the many themes found in the writings of Isaiah is that of pride. A universal sin, pride overcame the ancient Israelites of Isaiah’s day just as it overtakes many in our day. It likewise infected Nephi’s people, and so he incorporated warnings against pride by quoting Isaiah that spoke of its dangers and then offering his commentary.

As BYU professor David Rolph Seely wrote, “Pride is a central theme of the prophecies of Isaiah that Nephi quotes and also of Nephi’s own prophecies. Recognizing this theme can help us better understand and appreciate these passages and to identify the metaphors used by Isaiah and Nephi to warn us against pride.”1

Seely identified the theme of pride in the following Isaiah chapters that are also quoted in the Book of Mormon: 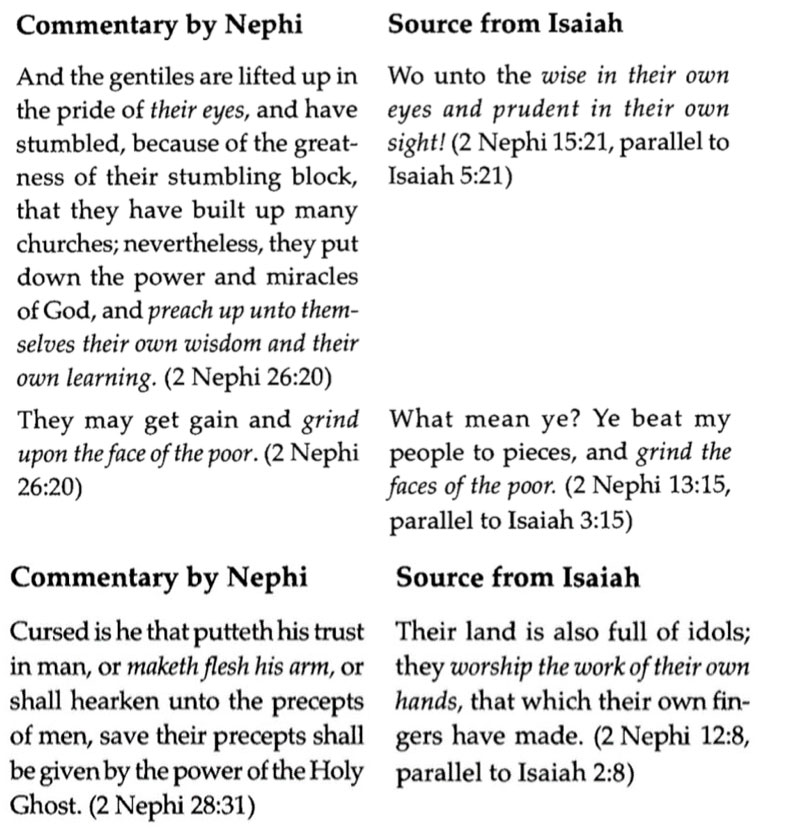 Per his explicitly stated method, Nephi “likened” these scriptures (originally about the destruction of Judah, Syria, Assyria, and Babylon) to his situation and the situation that would befall his descendants, who would likewise become proud and thus reap God’s judgment.

But as Seely elaborated, besides merely quoting Isaiah passages with the theme of pride and likening them to his descendants, Nephi also developed his prophetic commentary on this subject in his subsequent prophecies about the last days. For example, Nephi utilized Isaiah 3:15 (= 2 Nephi 13:15) and Isaiah 5:21 (= 2 Nephi 15:21) in his commentary on the pride of latter-day Gentiles in 2 Nephi 26:20. Likewise, Nephi utilizes the language of Isaiah 2:8 (= 2 Nephi 12:8) in his warning against making “flesh his arm” in 2 Nephi 28:31.

Thus, Nephi’s extensive commentary in 2 Nephi 25–30 can be seen as a reflection on and adaption of many of the Isaiah chapters quoted earlier. Nephi can thus be seen as first introducing his readers to the theme of pride with these selections from Isaiah and subsequently developing a prophetic warning against this sin in later chapters. 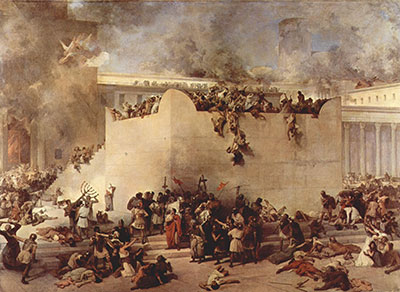 As Seely explained, “Isaiah looks into the future and sees the destruction of a series of nations and peoples, and in each case he cites pride as the cause of their rejection of the Lord and of their eventual scattering and destruction. In his prophecy about the history of the Jews, Lehites, and Gentiles, Nephi also identified, often in the language of Isaiah, the main challenge that each of these groups faces as pride.”2

Since pride is a sin that affects everyone to varying degrees, it is understandable why Nephi would be inspired to include a discussion of and warning against it in his writings. The ultimate manifestation of pride is rejection of the Savior and his commandments, something Nephi was keenly and tragically aware would be done by his people. 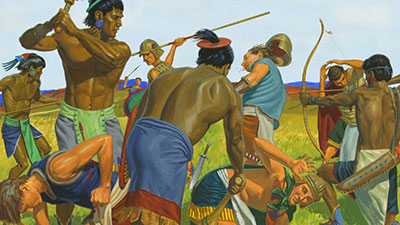 “Nephi [described] how the Messiah will present himself to [the Jews, Nephites, and gentiles] and how in each case the main reason for their rejection of the Messiah and his gospel is pride,” Seely explained. “Ultimately, however, through the revelation of the Book of Mormon to the gentiles, each group will repent of its pride, be brought back to a knowledge of the Messiah, and enter into a covenant with the Lord.”3 Nephi’s writings thus act as a prophetic precaution against pride for latter-day readers. 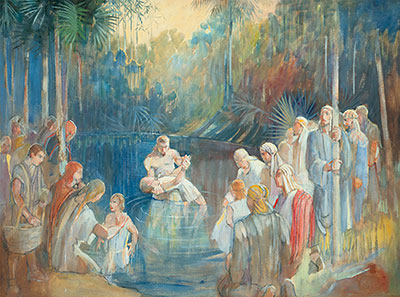 Additionally, this took on a personal nature for Nephi himself. “On a more personal level, Nephi identifies pride as one of the main reasons that his brothers Laman and Lemuel reject the teachings of their father and of Nephi,”4 Seely remarked. Nephi himself struggled with pride (2 Nephi 4:17–18), but, as Seely reminded us, overcame that by humbly submitting to the Lord (1 Nephi 2:16).

Besides describing the dangers of pride even more prominently than the Bible, the Book of Mormon also teaches that humility, faith, patience, and charity are antidotes to fight this chronic sin. “As we read the warning against pride pronounced with eloquence by Isaiah and in plainness by Nephi, and as we study their other prophecies” we can liken their words to our lives and benefit from their wisdom and guidance (2 Nephi 11:8).5