Book of Mormon Central / KnoWhys
Why Must One Pray Always to Endure to the End?

In 2 Nephi 31, Nephi expounded upon the doctrine of Christ, concluding with an admonition to “endure to the end” by pressing “forward with a steadfastness in Christ” (v. 20).1 Yet despite his efforts to convey this principle, Nephi’s audience still seemed uncertain about what they should do after repenting and receiving baptism (see 2 Nephi 32:1). In this context, Nephi reminded them that they could “speak with the tongue of angels” (v. 2). He then delivered his famous teachings concerning prayer, admonishing them that they “must pray always, and not faint” (v. 9).

Nephi explained that it is the Spirit of the Lord that “teacheth a man to pray” and that if a man would hearken unto this divine influence, he would know that he “must pray” (2 Nephi 32:8). In contrast, “the evil spirit teacheth … that he must not pray” (v. 8). To help emphasize the stark difference between these opposing spiritual influences, Nephi paired similar, yet opposite, endings for the main parts of his statement:

For if ye would hearken unto the Spirit which teacheth a man to pray
ye would know that ye must pray;
for the evil spirit teacheth not a man to pray,
but teacheth him that he must not pray.2

After establishing the necessity of prayer, Nephi helped his audience understand how prayer is related to enduring to the end. They wanted to know what they “should do” after baptism (2 Nephi 32:1, emphasis added). Nephi explained that before they do anything, they should “pray unto the Father in the name of Christ, that he will consecrate thy performance … for the welfare of thy soul” (v. 9).

In this sense, prayer can function as a spiritual key, one which unlocks or reveals the actions needed for an individual to faithfully endure to the end.3 Nephi saw prayer as being facilitated by the gift of the Holy Ghost, which can reveal “all things what ye should do,” and, by implication, can even help one know what to pray for.4 Such divine inspiration would also allow its recipient to speak—and therefore to pray—with the “tongue of angels” (2 Nephi 32:2).5

By allowing the Holy Ghost to help facilitate prayers, and by allowing inspired prayers to help guide actions, those seeking guidance won’t ask or do “that which is contrary to [the Lord’s] will” (Helaman 10:5). In this submissive pattern of living, the Lord can “consecrate thy performance unto thee, that thy performance may be for the welfare of thy soul” (2 Nephi 32:9). As Elder D. Todd Christofferson defined it, “To consecrate is to set apart or dedicate something as sacred, devoted to holy purposes.”6 Thus those who consistently seek and then perform the will of the Lord can become sanctified and made holy if they endure in this pattern until the end of their lives.

Nephi lamented that his people would “not search knowledge, nor understand great knowledge, when it is given unto them in plainness, even as plain as word can be” (2 Nephi 32:7). This underscores how important and fundamental this doctrine was in Nephi’s perspective. This great prophet, who had seen sweeping visions and had been in direct personal communication with the Lord, saw the plain and simple principle of inspired prayer as a key to great knowledge.

Like Nephi’s people, many today may be misunderstanding or not applying Nephi’s injunction to “pray always” (2 Nephi 32:9). Expounding on this topic, Elder David A. Bednar taught that the Lord’s pattern of creating the world, with the spiritual creation preceding the physical creation, can be related and applied to prayer:

In a similar way, meaningful morning prayer is an important element in the spiritual creation of each day—and precedes the temporal creation or the actual execution of the day. Just as the temporal creation was linked to and a continuation of the spiritual creation, so meaningful morning and evening prayers are linked to and are a continuation of each other. … Morning and evening prayers—and all of the prayers in between—are not unrelated, discrete events; rather, they are linked together each day and across days, weeks, months, and even years.7

In part, this linkage between prayers occurs when, as Amulek taught, “your hearts [are] full, drawn out in prayer unto [the Lord] continually” (Alma 34:27). On the other hand, the Lord will feel like “a stranger” to the man who keeps Him “far from the thoughts and intents of his heart” (Mosiah 5:13). Those who become casual, complacent, or disinterested in prayer, will tragically cut themselves off from this vital “lifeline between mankind and God.”8 This seems to be part of the calloused attitude among Nephi’s people, which caused him to grieve and “mourn because of the unbelief, and the wickedness, and the ignorance, and the stiffneckedness of men” (2 Nephi 32:7).

In contrast, enduring prayer creates an enduring relationship with the Lord and, in turn, leads one to successfully endure to the end. Elder Richard G. Scott described the Lord’s plan for each individual’s life as “wondrously simple and so incomparably beautiful. As you continue to live righteously, you will always know what to do.”9 Personal capacity will be increased, life’s challenges can be endured with patience, and the path toward eternal life will be illuminated step by step. Such are the blessings for all who prayerfully abide in the Lord “permanently, unyieldingly, steadfastly, [and] forever.”10 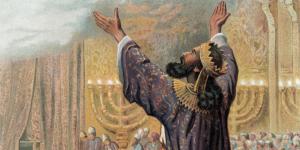