Book of Mormon Central / KnoWhys
Why Does Jacob Describe God as a Divine Warrior? 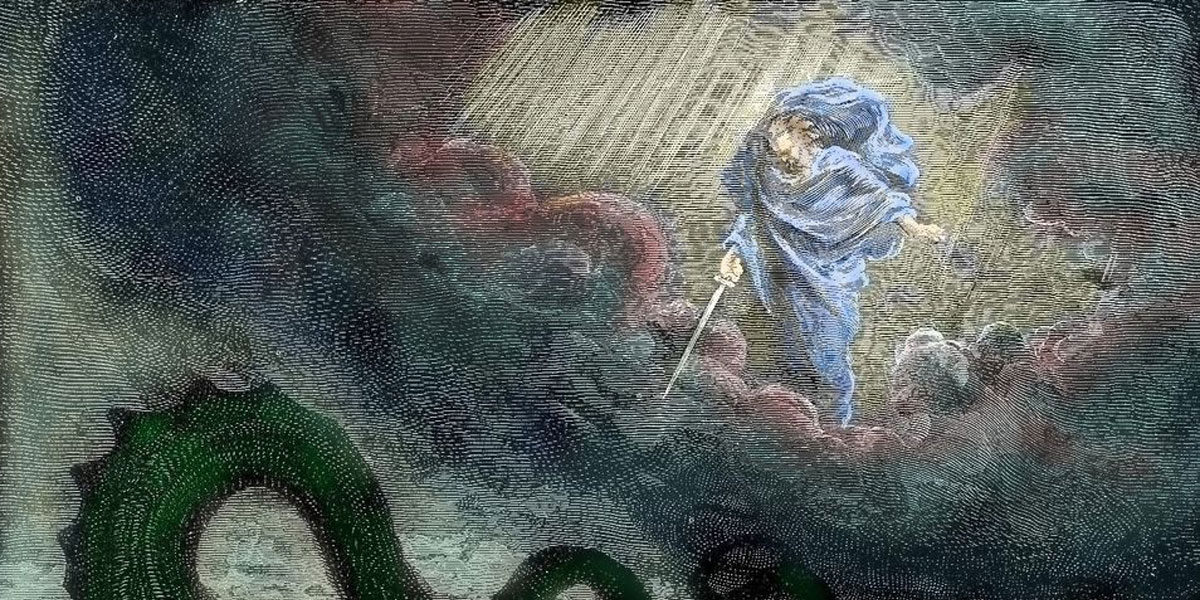 The Destruction of the Leviathan by Gustave Dore
“For the Mighty God shall deliver his covenant people. For thus saith the Lord: I will contend with them that contendeth with thee.”

Jacob’s powerful discourse recorded in 2 Nephi 6–10 uses some intense imagery that depicts God as ever ready to defend his faithful covenant people and fight battles on their behalf. Jacob’s Nephite audience had been driven from their ancestral land of promise in Jerusalem and were concerned that they had now been cut off from the Lord’s covenantal promises of prosperity and security. Jacob sought to reassure his people that the Lord had not forgotten them by utilizing the traditional scriptural portrayal of God as a Divine Warrior who had the power to intervene and fulfill His covenantal promises.

Jacob started his discourse by reading to his audience from the words of Isaiah and providing some of his own commentary as a way of “likening” the words of Isaiah to them (2 Nephi 6:4–5). He explained how, after being persecuted and crucified at the hands of the Jews, the Messiah would come a second time “in power and great glory, unto the destruction of their enemies” (v. 14).

Jacob sought to inspire hope in his people that the Lord would come to fight their battles, because they had made covenants with Him. He assured them, quoting from Isaiah: “for the Mighty God shall deliver his covenant people. For thus saith the Lord: I will contend with them that contendeth with thee” (2 Nephi 6:17; Isaiah 49:25). 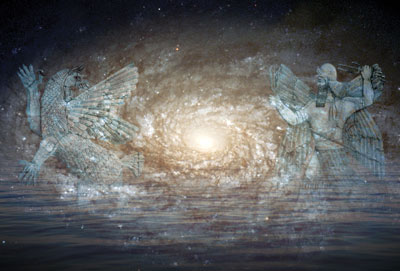 Depiction of primordial chaos represented as a serpent. Image by Book of Mormon Central.

This type of language, which attributes to Jehovah the characteristics of a “divine warrior” who comes from heaven to fight battles on behalf of his covenant people, is found throughout the Old Testament and is common to traditions regarding many deities throughout the ancient world.1 When the ancient Israelites celebrated the history of God’s intervention to save or redeem His children, they often used dramatic images of God coming as a conquering hero and vanquishing the opposition.2

BYU Professor of Ancient Scripture, Daniel Belnap, explained that throughout the ancient Near East, the story of God’s creation of the cosmos was often described as the Deity overcoming Chaos. In these traditions, Chaos was often equated with the “precosmic ocean,” which was characterized as a serpent or a monster. The process of creation consisted of a battle between the warrior god and the chaos monster, wherein God kills the monster, then takes its carcass and shapes it into the cosmos, “thereby imposing ‘order’ on chaos.”3

Although this is not the creation story that we see in Genesis, these conquering themes appear many times throughout the Old Testament. For example, after the account of the children of Israel passing through the Red Sea on dry ground, the book of Exodus records a song of thanksgiving that Moses offered, which praised God for acting on Israel’s behalf in His role as Divine Warrior. 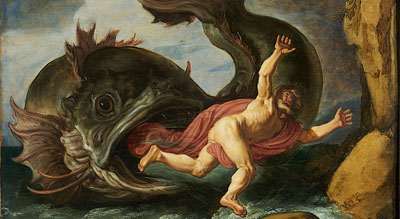 Jonah and the Whale by Pieter Lastman via Wikimedia commons

In Psalm 106:9, it is apparent that the vanquished enemy of the Exodus was, once again, the sea: “He rebuked the Red sea also, and it was dried up: so he led them through the depths, as through the wilderness.”

When Jacob shared his own thoughts on the Isaiah readings, he used the concept of a monster to describe the chaos inherent in our mortal life, from which only God can save. In 2 Nephi 9:10–11, he declared:

O how great the goodness of our God, who prepareth a way for our escape from the grasp of this awful monster; yea, that monster, death and hell,4 … And because of the way of deliverance of our God, the Holy One of Israel, this death … shall deliver up its dead; which death is the grave.

Jacob taught that the Holy One of Israel will deliver his saints “from that awful monster the devil, and death, and hell, and that lake of fire and brimstone” (2 Nephi 9:19). He went on to proclaim that it is through “the atonement” that God is able to deliver from this monster (vv. 25–26). 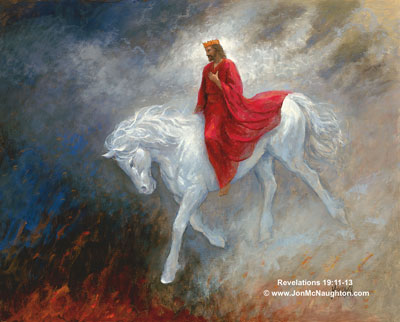 Jesus Christ as a Divine Warrior. Painting by Jon McNaughton.

One of the stated principal purposes of Jacob’s speech in 2 Nephi 6-10 was to teach his people “concerning the covenants of the Lord that he has covenanted with all the house of Israel” (2 Nephi 9:1), so that “[they] may rejoice, and lift up [their] heads forever” (v. 3).5 Modern readers may wonder how depicting God as a conquering warrior would have given ancient believers the hope and faith that God would fulfill those covenants.

The Lord had promised Israel in the book of Deuteronomy, a book with which the family of Lehi was likely very familiar,6 that if they were obedient to the covenants they had made with Him, God would deliver their enemies unto them and then “destroy [their enemies] with a mighty destruction, until they be destroyed” (Deuteronomy 7:23). The Lord similarly declared in Deuteronomy 32:41–43 that: “If I whet my glittering sword, and mine hand take hold on judgment; I will render vengeance to mine enemies … for he will avenge the blood of his servants.”

The covenant people were taught that if they kept their covenants, they could call upon the Lord to fulfill His promise to defend them from all harm and evil. For example, in Psalm 74:20–22, when Israel was faced by “roaring” enemies, they pled with God to: “Have respect unto the covenant! … Arise! … Remember!” 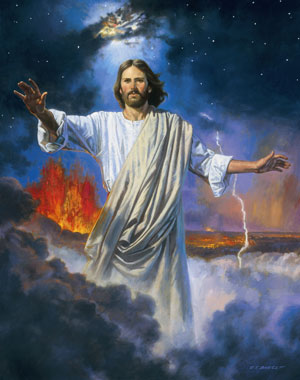 This psalm asserts confidence that God can do this because He has, in the past, worked “salvation in the midst of the earth.” He did “divide the sea by [his] strength,” broke “the heads of the dragons in the waters,” and did “cleave the fountain and the flood” (Psalm 74:12–13, 15). The devout thought here is that if the Lord had done these marvelous things in the past, He could surely come now to deliver His faithful saints, as he has promised to do.

Especially since the family of Lehi had been scattered or driven out of their old land of inheritance and were feeling cut off from their covenantal blessings, Jacob sought to help them understand that the Lord was able to fulfill his promises to all those who kept their covenants, wherever they might be. Jacob ended his discourse by assuring them that their posterity will be given “the true knowledge of their Redeemer” and by exhorting his audience to remember the Divine Warrior’s capacity to save: “And now, my beloved brethren … let us remember him, and lay aside our sins, and not hang down our heads, for we are not cast off” (2 Nephi 10:2, 20).

For modern readers, the use of the Divine Warrior tradition in the scriptures can assure us that God will help us fight our battles and will come to our aid, particularly in overcoming the forces of the Evil One around us. The battle may be against sin and temptation, or against doubt and distrust, or against trials and afflictions. In his powerful covenant speech, Jacob illustrates how the scriptures present the Holy One of Israel as the promised Divine Warrior in order to assure all of God’s children that He will help us fight and prevail over any and all challenges that face us.