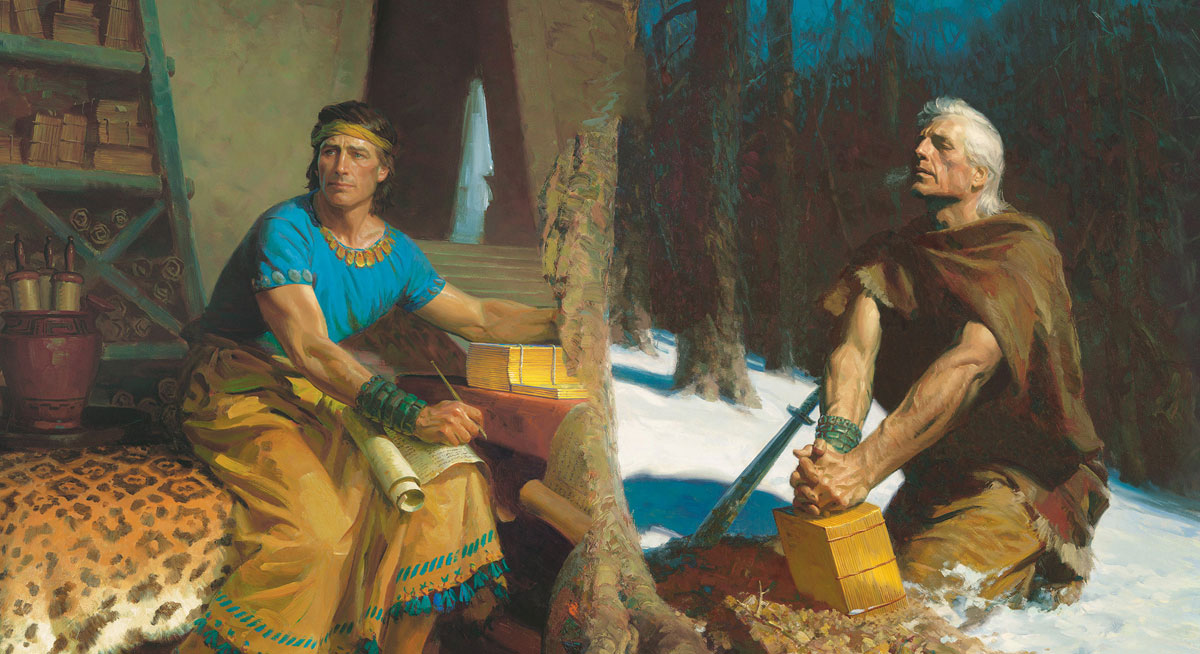 Adaptation of Tom Lovell Artwork
“And now I, Moroni,…”

In describing the book of Ether, Book of Mormon scholar Grant Hardy has observed, “Moroni maintains a more pervasive narrator presence” than his father, Mormon.1 Moroni broke in to comment on the Jaredite narrative at five points: Ether 1:1–6; 3:17–20; 4:1–6:1; 8:18–26; 12:6–41.2 In the book of Ether alone, the phrase “I, Moroni” appears eleven times. In contrast, the phrase “I, Mormon” only appears three times outside Mormon’s own writing about his own lifetime.3 Moroni used Mormon’s classic phrase “and thus we see” only once.4 One wonders why Mormon’s and Moroni’s approaches were so different.

One possible explanation is that Mormon wrote with some sense of security while Moroni was constantly unsure of his own safety and whether he would have any time to write more. Mormon had an entire decade to compile and abridge the Book of Mormon when the Nephites and Lamanites made a ten year peace treaty around AD 350.5 It would have provided an opportunity to carefully craft his narrative to make the points he wanted to make. His characteristic “and thus we see” served his purposes perfectly without breaking into the text as obviously. In addition, he likely believed he would have enough time to write about his own life, and thus did not feel the need to break into the text with personal comments as often. 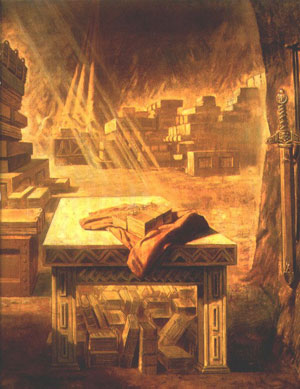 Moroni, on the other hand, appears to have been surprised that he survived long enough to write anything after his abridgement of Ether. He states, “Now I, Moroni, after having made an end of abridging the account of the people of Jared, I had supposed not to have written more, but I have not as yet perished” (Moroni 1:1). Moroni’s uncertainty about how much time he had left may be reflected in the way he commented on the Jaredite record.6

When one removes Moroni’s five comments from Ether, the remaining text flows flawlessly.7 Ether 12–13 is a good example of this. When Ether 12:5 and 13:2 are combined, they read like they belong back to back: “Ether did prophesy great and marvelous things unto the people, which they did not believe, because they saw them not ... For behold, they rejected all the words of Ether; for he truly told them of all things, from the beginning of man.” These two verses flow perfectly together, even though there is almost an entire chapter between them.

This evidence suggests that Moroni did not heavily edit the original Jaredite record while interspersing light commentary like his father did, but rather left the Jaredite record more or less intact. He seems to have only lightly edited it, while occasionally inserting large blocks of personal commentary all at once. In Hardy’s words, Moroni’s “treatment of the [the Jaredite record] reads like a lightly edited chronicle.”8 Ultimately, “Moroni does not appear to be reworking his source material to any appreciable extent; in contrast to his father’s abridging.”9

The seamlessness of the text that one sees when Moroni’s asides are removed is a subtle witness to the Book of Mormon’s authenticity. Joseph would often dictate long portions of the Book of Mormon, stop translating for a while, and then pick up exactly where he left off without asking anyone where he had stopped the session before.10 Dictating an aside as long as Ether 12 from memory and then getting back to the narrative without asking where he had left off would be a remarkable feat of memory if he were not actually translating something. 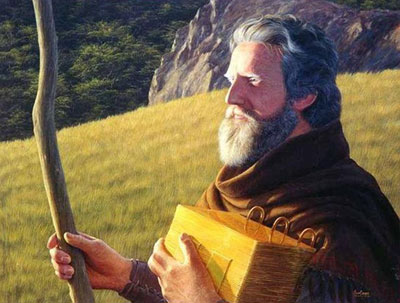 Even more significant, however, is what this says about Moroni. It is hard to comprehend what it was like to write and abridge so much of the Book of Mormon with death constantly hanging over his head. Moroni seemed uncertain about when his life would end, as he included multiple endings11 and persistently inserted his own thoughts into Ether. And yet, despite the incredibly difficult circumstance he worked under, Moroni was still able to produce page after page of beautiful scripture.

Despite the constant probability of death, Moroni, “finished his father’s inspired abridgment of the Nephite millennial-long history; … he abridged the writings of Ether, ... he recorded the lengthy writings of the brother of Jared on the gold plates and sealed them up.” After that:

He wandered alone about the land for many years, not only concerned about his personal safety, but also fully aware of his responsibility to preserve the plates until he was commanded to hide them in the earth. Finally, after traveling extensively and fulfilling priesthood responsibilities, he deposited the plates in a hillside in what is now western New York state. What Moroni accomplished has blessed many people and will yet bless many more.12