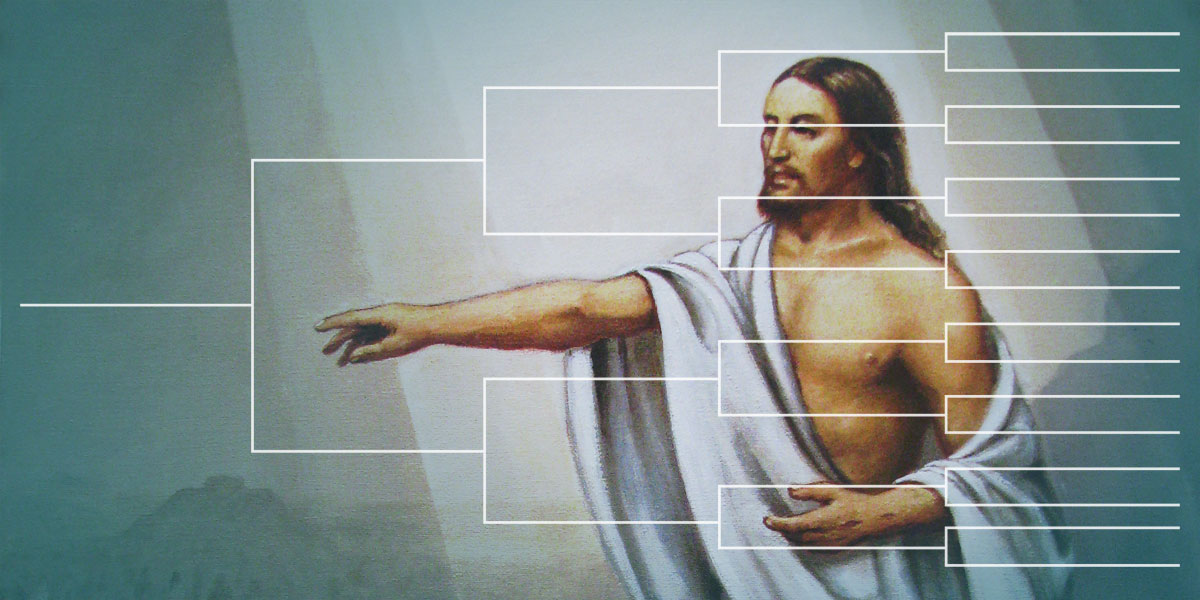 He soy Jesucristo by Jorge Cocco. Modified by Book of Mormon Central
“Behold, I will send you Elijah the prophet before the coming of the great and dreadful day of the Lord; And he shall turn the heart of the fathers to the children, and the heart of the children to their fathers, lest I come and smite the earth with a curse.”

Near the end of his time with the Nephites after his resurrection and ascension, Jesus gave to His disciples and commanded them to write “words which the Father had given unto Malachi” and commanded that they be given to the Nephites (3 Nephi 24:1). Those words were Malachi chapters 3 and 4. After giving His disciples these words, Jesus “expounded them unto the multitude” (3 Nephi 26:1). Why might Jesus have quoted these words, the last two chapters in the current Old Testament?

These two chapters are cryptic, but they are loaded with eternal promises. They look forward to the last days. First, God promised that He will “send [his] messenger,” “even the messenger of the covenant,” who will “suddenly come to [the Lord’s] temple” (Malachi 3:1; 3 Nephi 24:1). He asked “who may abide the day of his coming?” (Malachi 3:2; 3 Nephi 24:2), for the Lord requires loyalty, chastity, and charity, and will be “a swift witness” against all kinds of wickedness (Malachi 3:5; 3 Nephi 24:5).

God then looked back to the days of our fathers, our ancestors, and He invited everyone to remember to keep His ordinances and “return unto me” (Malachi 3:7; 3 Nephi 24:7). He promised that, if we will “bring all the tithes into the storehouse,” He will cast Satan out of our midst and “rebuke the devourer for [our] sakes,” and He assured His people that “all nations shall call you blessed, for ye shall be a delightsome land, saith the Lord of hosts” (Malachi 3:10–12; 3 Nephi 24:10–12).

But to be so blessed, the righteous must revere and call upon the name of the Lord. If they do this, they shall have their names written in “a book of remembrance,” and they shall be the Lord’s, and He “will spare them, as a man spareth his own son who serveth him” (Malachi 3:16–17; Malachi 2:16–17).

And finally, the Lord of Hosts promised that the day of burning will come, but that unto the righteous His Son will arise with healing in His wings (Malachi 4:1–2; 3 Nephi 25:1–2). He required us to “remember the law of Moses” with its statutes and judgments “for all Israel” (Malachi 4:4; 3 Nephi 25:4), and He promised that before this “day of the Lord” He will send Elijah the prophet to “turn the heart of the fathers to the children, and the heart of the children to their fathers,” so that He may come with blessings and not need to “smite the earth with a curse” (Malachi 4:6; 3 Nephi 24:6).

While we are not told what Jesus said as He explained these particular words, His probably would have covered topics found in these chapters, including covenants, temples, returning to God, casting Satan out, obedience, the powers of Elijah, marriage and blessings for the living, together with ancestors (the fathers) and posterity (children). Apparently, at this time Jesus connected these blessings with the covenant of marriage (see “wife of thy covenant” in Malachi 2:14, which is assumed in Malachi’s warning against adultery in Malachi 3:5; 3 Nephi 24:5). Near the beginning of the book of 4 Nephi, Mormon’s account connects marriage with the multitude of blessings that the Lord had promised: “And they were married, and given in marriage, and were blessed according to the multitude of the promises which the Lord had made unto them” (4 Nephi 1:11). From what was written on the plates of Nephi, Mormon and his son Moroni knew what Jesus taught on this occasion, but they were constrained from writing more at that time.1 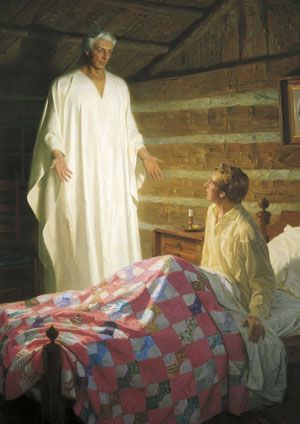 The Angel Moroni Appears to Joseph Smith by Tom Lovell

In 1823 Moroni visited Joseph Smith. Moroni came now as God’s messenger to prepare the way for the Lord’s coming. He spoke to the young Joseph about two principal topics: 1) the coming forth of an ancient record known as the Book of Mormon and 2) the prophecy of Malachi regarding the coming of Elijah in the last days.2 These two key themes—which Jesus  taught in 3 Nephi 21:2–7 and in 3 Nephi 25:6–7 and Moroni now reemphasized—would become essential to Joseph Smith’s role as the prophet of the Restoration.

After the angel Moroni revealed to Joseph what needed to be done in order to bring forth the Book of Mormon, he then quoted (with slightly modified language) from the book of Malachi: “Behold, I will reveal unto you the Priesthood, by the hand of Elijah the prophet, before the coming of the great and dreadful day of the Lord. And he shall plant in the hearts of the children the promises made to the fathers, and the hearts of the children shall turn to their fathers. If it were not so, the whole earth would be utterly wasted at his coming” (Doctrine & Covenants 2:1–3; Joseph Smith—History 1:38–39). Thus, Moroni began right where Jesus had left off toward the end of 3 Nephi.

It is clear that Elijah’s prophesied mission would play a key role in the Restoration and that Moroni was well aware of its importance. He would have been familiar with Malachi’s prophecy as a part of the Nephite tradition due to the fact that Jesus made sure that it was included in the Nephite record (3 Nephi 25:5–6; 26:2). Perhaps Moroni mentioned in 1823 that the priesthood would be unveiled to Joseph because Jesus had expounded on how Elijah held the power to bring hearts of parents and children eternally together in the morning of the Lord’s final coming.

The importance of Elijah’s mission and the role of the priesthood keys was not lost on the Nephite authors. The story of Elijah had considerable influence on Book of Mormon prophets. For example, Nephi’s account of traveling from Jerusalem into the wilderness in 1 Nephi 7 appears to have been composed with some elements of Elijah’s travels in the wilderness from 1 Kings 19 in mind. Some of the parallel elements include:

Another example of this influence can be found in Helaman 10–11, the story of Nephi, son of Helaman, who received the sealing power. Mormon apparently shaped his abridgment of this story so that it paralleled another story of Elijah. Elijah had long been seen in Jewish and Christian circles as the bearer of heavenly keys. When Elijah declared that there would be no rain, it was because God had given him the power to close up the heavens (1 Kings 17:1). Nephi apparently used his God-given power to seal the heavens in the name of the Lord, just as Elijah had (Helaman 11:2–4, 13). There are many other allusions to the Elijah story in these chapters.4

It should not escape our attention that another Nephi, the son of this Nephi the son of Helaman, would be chosen by the resurrected Jesus Christ to be one of His twelve Nephite disciples. He is described as ministering with “power and with great authority” (3 Nephi 7:17). That “power” allowed him to work many miracles, including, particularly, being able to raise his brother from the dead (v. 19).

Although it is not stated explicitly in the text that this Nephi was given power to “seal,” as his father was, the connection between him being given power and being able to raise the dead may be a powerful allusion to the type of authority that was given to Elijah.5 The Rabbis would claim that Elijah was able to raise the widow’s son (1 Kings 17:23) because God had given him the keys to the resurrection.6 This would seem to imply a belief that Elijah had been given the keys to unlock the gates of Sheol or Hell (the spirit realm).7 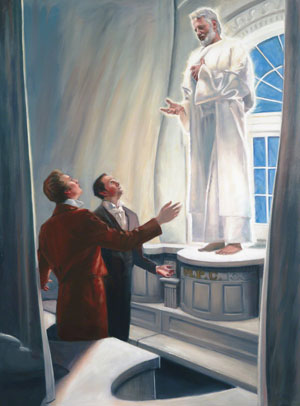 True to Moroni’s revealed word, Elijah did come in a visitation to the Prophet Joseph and Oliver Cowdery in the Kirtland Temple in 1836, and bestowed upon Joseph Smith the sealing powers. At that time Elijah announced the fulfillment of Malachi’s prophecy and declared: “Therefore, the keys of this dispensation are committed into your hands; and by this ye may know that the great and dreadful day of the Lord is near, even at the doors” (Doctrine &Covenants 110:14–16).

After Joseph Smith had received the priesthood keys from Elijah, he clearly taught that the authority of those keys was connected to the realm of the dead. Joseph stated that the purpose of the keys passed on by Elijah was, at least in part, to build “a welding link … between the fathers and the children” through “baptism for the dead” (Doctrine and Covenants 128:14, 17–18). Joseph declared that the Church had been given “that which would enable us to redeem [the dead] out of their prison; for the prisoners shall go free” (Doctrine and Covenants 128:22).

Joseph Smith then went on to teach that no covenant, including the covenant of marriage, both for time and for all eternity, has any efficacy or effect in and after the resurrection without this sealing power (Doctrine & Covenants 132:7, 15–19). Thus, saving the living is bound eternally with saving also the dead.

Thus, for all these reasons, Jesus quoted the words of Malachi toward the end of 3 Nephi. These words contain instructions about covenants, temples, ordinances, promises and eternal blessings, especially connected with marriage, ancestors, and posterity. Those doctrines were important to the Nephites at the temple in Bountiful, just as they were in Joseph Smith’s life, and as they are to Saints today in preparation for the coming of the day of the Lord. These words of Malachi contain references to hearts of the children turning to their fathers. The Nephites would have wanted to share the great news of the fulfillment of the prophecies that their ancestors had looked forward to, just as much as members of the Church in our latter-day hour are inspired to share the blessings of Christ with their progenitors as well.

In these many regards, Elder David A. Bednar has aptly concluded:

The introductory events of the Restoration [Moroni’s visit] … emphasized the importance of the Book of Mormon, and anticipated the work of salvation and exaltation for both the living and the dead. This inspiring sequence is instructive about the spiritual matters of highest priority to Deity.

The restoration of the sealing authority by Elijah in 1836 was necessary to prepare the world for the Savior’s Second Coming and initiated a greatly increased and worldwide interest in family history research.8